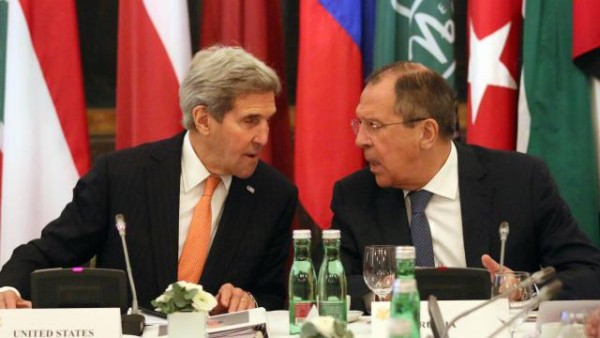 An international conference in Vienna has proposed elections in Syria within 18 months, but has made no clear statement on the future of President Assad.

Agreeing to work for an immediate ceasefire, the participants — including Russia, Iran, the US, Saudi Arabia, the European Union, and the UN — endorsed a transition process in which “free and fair elections would be held pursuant to [a] new constitution” by spring 2017.

The conference did not say whether President Assad and members of his inner circle could participate in the drafting of the constitution or the elections. US Secretary of State John Kerry noted after the meeting, “We still differ on what happens to [Syrian President] Bashar al-Assad.”

I cannot agree that Assad is the source of all this. ISIL [the Islamic State]…appeared ten years ago rather than three or four years ago. I am a little worried by the phrase John said that if Assad steps down, the regional nations will unite to defeat ISIL.

Lavrov also complained that the US “answered with silence” Russia’s proposal for cooperation over military action inside Syria.

Russia and Iran have pressed for the Presidential and Parliamentary elections without an explicit reference to Assad leaving power. At the first negotiations in Vienna on October 30, a proposal by the US, European powers, and Saudi Arabia had envisaged the President stepping aside within a year during the 18-month transition.

The conference said discussions between the regime and opposition would be arranged, with a target date of January 1, 2016. It did not explain how opposition groups would be convinced to participate, given their firm line on Assad’s departure.

Other countries did check Moscow’s push for rebel groups to be designated as “terrorist”, thus putting them outside any resolution. Instead, Jordan was mandated to “help develop among intelligence and military community representatives a common understanding of groups and individuals for possible determination as terrorists”.

The conference also supported a renewal of UN peacekeeping inside Syria, with a “monitoring mission in those parts of the country where monitors would not come under threat of attacks from terrorists”.

A short-lived UN mission, hindered in movement through Syria and largely ineffective, ended in July 2012.

The participants also called on all side to allow access for humanitarian aid, expressing “concern for the plight of refugees and internally displaced persons and the imperative of building conditions for their safe return”.

Video: Retrieving Dead and Injured after Regime Airstrike on School

Volunteers retrieve dead and injured after a regime airstrike on a school in Maarat al-Nu’man in Idlib Province in northwest Syria on Sunday — activists said at least three children were killed:

The fighters said that almost all of the fighting in the offensive is being carried out by Hezbollah, Iranian, Iraqi, and Afghan troops: “The Iranians are in command and control of the battle.”

Residents of the Damascus suburb of Douma, besieged for years by the Syrian military’s siege and bombardment, express sympathy for the victims of Friday’s Islamic State attacks in Paris. 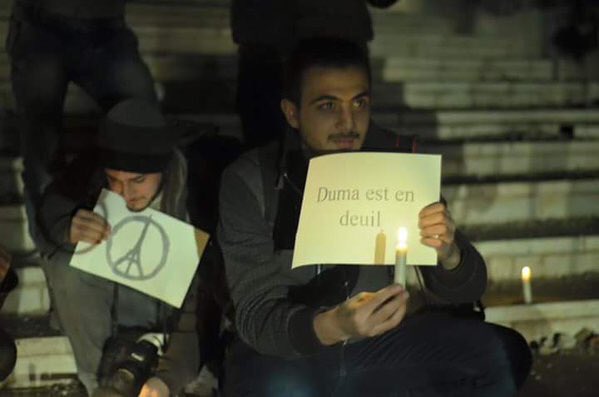 Rebel factions throughout Syria, including the Free Syria, Jaish al-Islam, and Ahrar al-Sham, have condemned the shootings and bombings that killed 129 people in six locations across Paris.

(1/4) The only possible reaction to the despicable acts of terror in Paris is total and unequivocal condemnation. #ParisAttacks

Defeating Daesh will not be achieved by military and security means, Daesh is an intellectual and social project and will not be defeated except by an alternative project headed by the majority in Syria.