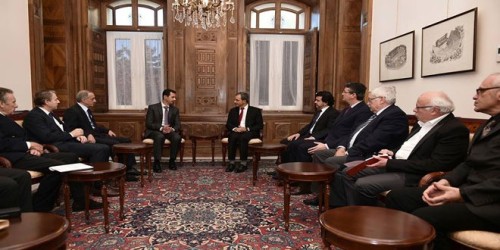 PHOTO: President Assad with a French delegation on Saturday

As a second international conference convened in Vienna, Syria’s President Assad tried on Saturday to take advantage of the Islamic State’s attacks in France that killed at least 128 people.

Assad told a French delegation, headed by National Assembly member Thierry Mariani, that Friday night’s events in Paris and a double bombing on Thursday in the Lebanese capital Beirut could not be separated from the challenge to his regime since 2011: “Terrorism is one field in the world and terrorist organizations don’t recognize borders.”

The Syrian President tried to put pressure on France, the US, and other attendees at the Vienna meeting, “Wrong polices adopted by western states, particularly France, towards events in the region, and its ignorance of the support of a number of its allies to terrorists are reasons behind the expansion of terrorism.”

Assad’s allies Russia and Iran are putting an emphasis at the Vienna meeting on an agreed list of “terrorists”, hoping to include rebel factions as well as Jabhat al-Nusra and the Islamic State among the groups.

Asked about the Paris attacks, the President chided France and other European states:

We have warned of what will happen in Europe three years ago… but, unfortunately the European officials didn’t care about what we have said….We are ready to fight terrorism with any serious side, but the French government is not serious yet….

If [French President Francois] Hollande wants to work for the interest of his people, he has to change his polices.

What happens in Syria doesn't stay in Syria Mr. Hollande. Your "rebels" are thanking you for all the support 👏🏻 #ParisAttacks … 💔

So did Russian State newspaper Izvestia, using political scientist Paul Svyatenkov, with the claim that France is “paying for its active role in destabilizing the Middle East and its overly welcoming stance to refugees”.

In northwest Syria, the protesters of Kafranbel tried to return attention to killing blamed on the regime and Russia.