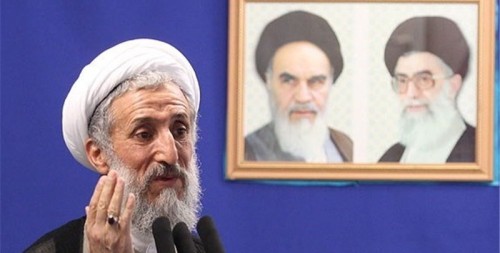 In the latest high-level attack within Iran’s regime on Hassan Rouhani, the Tehran Friday Prayer has denounced the President’s challenge to the crackdown on journalists, businessmen, and activists.

On Sunday, Rouhani denounced recent arrests by the Revolutionary Guards and their proclamation of a “fourth sedition” threatening the Islamic Republic, through a challenge to hardline media:

[They have] a permanent security margin…so that not only can they say whatever they want, but they also sometimes act like the secret police.

You learn from some publications who will be arrested tomorrow, what is going to be closed down tomorrow, which individual’s reputation should be damaged.

Mr. President…you said things that sting; who were you defending and who were you attacking? Someone who is in charge of the administration, and is the highest authority in the country after the Supreme Leader, must not deal with issues angrily, and should not speak bitingly….

Sedighi said “it is a pity” that Rouhani has one approach in speaking with foreigners, but “in attacking insiders, speaks in a different tone to believers, the faithful, and the country’s servants”.

He jabbed, “Unfortunately, we did not train our leaders for service.”

The cleric reinforced the hardline attacks on sedition and “soft war” with a call for universities to become more “Islamic”: “We want to educate individuals in such a way that they have a hatred for the ‘arrogance’ [Western dominance]….This is a necessary matter for culture-building in the country.”

He even intervened on a specific case to defend the Guards and the arrests, referring to the case of the recently-detained Lebanese-American businessman Nazar Zaka:

This gentleman had a mission to launch a virtual social network with American goals…who was arrested and confessed to receiving their dollars and evil goals; others were arrested alongside him. They should take this point which the Supreme Leader of the Revolution emphasized seriously [against infiltration], because it’s a very serious warning.

Sedighi also put out Iran’s toughened position on the maintenance of Syria’s President Assad in power, as Tehran put in more troops alongside the Syrian military and Russian airstrikes and as international talks reconvened in Vienna:

Some ask what we are doing in Syria, then some group says that [Syrian President] Bashar al Assad must go, but on the issue of support for Syria and the preservation of Bashar al Assad, the Supreme Leader has signaled a [red] line from the start.

He praised Syrians for “electing” Assad, whom he said was standing “heroically against the great powers”.