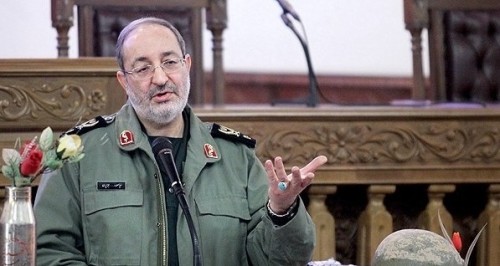 Echoing the line of the Assad regime in Syria, Iran’s officials have blamed the French Government for the Islamic State’s attacks in Paris that killed 129 people on Friday night.

The deputy head of Iran’s armed forces, General Massoud Jazayeri said on Saturday, “The French people paid the price for their government’s support for the ISIL [Islamic State] and the Takfiri terrorism.”

The Paris and Beirut blasts are the two sides of the same coin and the international community expects the supporters of Takfiri terrorists, especially the US, France and other western governments, to give up their discriminatory approach and behavior and adopt a common and united position on these crimes.

First Vice President Eshaq Jahangiri avoided an explicit reference to the government of President Francois Hollande but said, “Some countries have definitely played a role in the formation of the Daesh Takfiri terrorist group and its survival.”

On Saturday, President Assad seized on the Paris attacks to tell a visiting French delegation, “Wrong polices adopted by western states, particularly France, towards events in the region, and its ignorance of the support of a number of its allies to terrorists are reasons behind the expansion of terrorism.”

Speaker of Parliament Ali Larijani set aside any criticism in his message of condolence to the President of the French National Assembly, Claude Bartolone:

Unfortunately, the world has been witnessing such inhuman crimes and incidents over the past years, which have resulted in nothing but the killing of defenseless people and the creation of chaos and insecurity.

However, Iranian media are maintaining the pressure over “support of terrorism”. Press TV portrays Saudi Arabia’s position at Saturday’s conference on the Syrian crisis as a declaration that it will continue to back “Takfiri militant groups” as long as Assad remains in power.