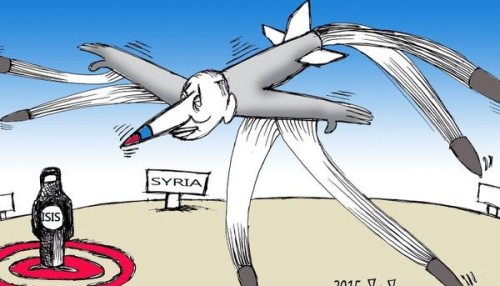 Russain airstrikes on Kafranbel town in Idleb have hit an HQs of the US-backed Suqour al-Jabal FSA brigade.

Russian also began attacks late Wednesday in and near Jisr al-Shughour, the city in Idlib Province on the Turkish border captured by rebels in late April. A mosque has been damaged, with at least five people killed and more than 20 injured.

Syrian warplanes are striking villages attacked by Russia on Thursday, including barrel-bombing of Zafarana in Homs Province.

Meanwhile, Kremlin spokesman Dmitry Peskov has admitted — contrary to Foreign Minister Sergei Lavrov’s line about 18 hours ago — that Russian strikes are not “exclusively” against the Islamic State. Instead, Moscow is carrying out attacks on a “list of extremist organizations”.

Russia carried out its first airstrikes on opposition-held areas of Syria on Wednesday, bombing parts of Homs and Hama Province with scores of casualties.

Moscow has said its military intervention, which has escalated since late August, is directed against the Islamic State. On Wednesday, President Vladimir Putin called the airstrikes a “pre-emptive” operation against the militants, and Foreign Minister Sergei Lavrov said the attacks were “exclusively” on Islamic State sites: “Rumors that the targets of these strikes were not IS positions were groundless.”

The Defense Ministry said 20 sorties were carried out against eight sites. It said a command post and headquarters were destroyed, and warehouses with weapons, ammunition, petrol, and military equipments; communication hubs; and vehicles were hit.

However, rebels and activists said the Russian attacks were on Zaafarana, Rastan, Makarmia, and Talbiseh in Homs Province. All are held by the opposition — earlier this month, rebels defended Talbiseh, 10 miles north of Homs, against an Islamic State attack.

The bombing of Latamenah in Hama Province did aim at a headquarters, but it was of Tajamu al-A’aza, a US-backed rebel group that has received TOW anti-tank missiles rather than the Islamic State. US officials said it was unclear if Moscow deliberately hit the headquarters because of the American support for the group.

Analysts quickly geolocated the Russian Defense Ministry footage to be from Latamenah — presumably the “headquarters” attack cited by the Ministry — rather than from an Islamic State position. 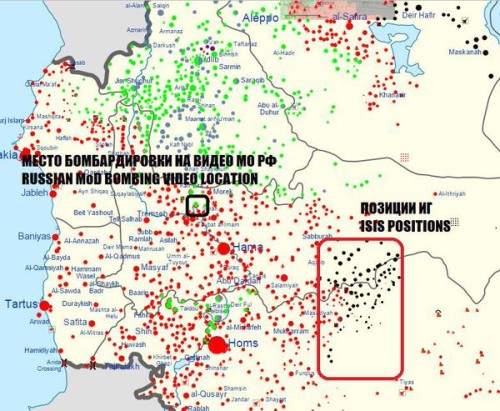 In addition, Ghanto in Homs Province was attacked by the Assad air force in an operation coordinated with the Russians.

Syrian State news agency SANA unwittingly supported the claims of the rebels and activists, as it said the Russian attacks were on “Islamic State dens” but identified the areas as the opposition-held Talbiseh and Rastan, in addition to the Islamic State-controlled Salamiyeh in Homs Province. The pro-regime al-Masdar News did not even pretend that the airstrikes were on IS, saying that Russia had attacked “Jabhat Al-Nusra’s (Syrian Al-Qaeda group) positions inside the provinces of Latakia, Hama, and Dara’a”.

Activists, including the Local Coordinating Committees, claimed at least 89 people were killed — 50 of them in Talbiseh. While the deaths of two rebel officers were acknowledged, almost all of the victims were civilians. Videos and photographs were posted of children slain and injured by the attacks.

They began talking that civilians had suffered during the strikes. We have no information about this.

We are closely monitoring the situation to make sure that the strikes are surgical, that the targets are only the positions, facilities, equipment and armament of terrorist groups.

A Russian newspaper tried another approach, putting out a map redefining opposition areas as “Islamic State”.

Footage of the attacks on Talbiseh:

US Initially Objects, But Steps Back After Talks Late Wednesday

The opposition Syrian National Coalition said the attacks “reinforce the belief that Moscow has become a partner to the Assad regime in committing war crimes and crimes against humanity and against Syrians [and] undermine Russia’s claims about seeking a political solution and about commitment to international law”.

The US also criticized the operations, although its concern was mainly that they were not upon the Islamic State and that American officials were only informed of Moscow’s intention an hour before the airstrikes, with a Russian general telling the US Embassy in Baghdad that American warplanes should get out of Syrian airspace. Secretary of Defense Ashton Carter said, “It’s not the behavior we expect” and continued:

If Russia’s actions reflect a genuine commitment to defeat ISIL, we are prepared to welcome those efforts….We would have grave concerns should Russia strike areas where ISIL-affiliated targets are not operating.

However, the US objections diminished later on Wednesday, as Russia successfully put the emphasis on avoiding any accidental clashes with American warplanes. Kerry stressed the “deconflicting” after talks with Lavrov in New York, and said the two sides would begin military talks “as soon as possible, perhaps even as soon as tomorrow”.

The Americans did not say if they would pull back from their recent acceptance of a Russian initiative for international talks, in which President Assad would retain power during a “transition”.

Russia has been able to use its military build-up — which includes advanced battlefield equipment and several hundred troops as well as warplanes, attack helicopters, and drones — as leverage to move the US, Britain, and Germany towards their political proposal. Saudi Arabia, a major backer of the rebels, is continuing to insist on President Assad’s departure before any negotiations develop.

See Syria Daily, Sept 30: Saudi Arabia “Assad Must Be Leave or Be Overthrown”

Foreign Minister Lavrov said, after the meeting with Kerry, that the US was still cooperating with the Russians:

Our President said while addressing the UN General Assembly that we will actively contribute to launching the political process on the Syrian settlement to create the conditions for the Syrians to agree on how they should live in their country, on the way they want to see their country, to agree that the rights of all ethnic groups and religious denominations are guaranteed, to make them feel involved, to be represented in the government bodies at the central and local levels and thus to put an end to the fratricidal conflict.

We [Russia and the US] agree that it’s necessary to achieve these objectives….However, we have certain disagreements regarding the ways of moving to that goal.

Far from moving towards a “transition”, Lavrov emphasized that Assad should continue to rule:

Our stance is clear — we seek no regime change. Nor do we discuss the fate of the legitimate president of a sovereign country. Citizens of the country in question should determine the fate of their president. We spoke about this today as well.

Kerry merely said, “We think we have some very specific steps that may be able to help lead in the right direction. That needs to be properly explored.”

And, even before that moment, there were PR problems for the Secretary of State:

So, Kerry shows up to meet Lavrov, finds Syrian FM Moallem there and turns and walks to another meeting room

The first reward offers for captured Russian troops have been put out by leading members in rebel groups and the Islamist faction Jabhat al-Nusra: