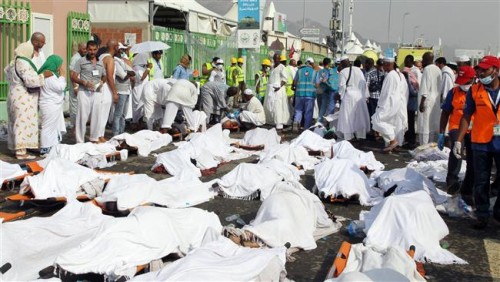 PHOTO: Bodies of some of those killed in last Thursday’s stampede at pilgrimage in Saudi Arabia

Iran’s officials have sharply raised the Iranian death toll from last week’s stampede at the Mecca pilgrimage in Saudi Arabia from 239 to 464.

The increase is largely as a result of declaring those Iranians who are still missing in Saudi Arabia as deceased. As of Wednesday, 241 were still listed as unaccounted for but not dead.

The latest announcement is likely to reinforce a week of denunciation of Saudi Arabia by the Iranian regime. In the latest statement, Deputy Foreign Minister Hossein Amir-Abdollahian demanded the immediate return of the bodies of Iranian victims, who died in a crush when two groups converged last Thursday for the “Stoning of the Devil” ritual at the hajj.

Earlier on Wednesday, Hassan Qazizadeh-Hashemi, belatedly allowed into Saudi Arabia the previous day, said Iran would be the first country to receive remains and transport them home. He said he had obtained confirmation that none of the bodies would be buried in Saudi Arabia without permission from family members or the Iranian Government.

The disaster had prompted Iranian confrontation of Riyadh in an already-tense relationship, dooming any hopes of an “engagement” to address Middle Eastern crises. The Supreme Leader has led the condemnation of Saudi negligence and ineptitude and demanded an apology. High-level officials and clerics have called for Saudi Arabia to be stripped of oversight of the hajj, with the Organization for Islamic Cooperation taking over.

President Rouhani used the opening of his Monday address to the UN General Assembly to highlight Iran’s criticism:

Public opinion demands that Saudi authorities discharge, without delay, their international responsibility in providing immediate consular access for the quick identification and returning of the bodies.

It is also required that the necessary conditions be provided for [conducting] an independent and precise inquiry into the causes of the disaster and [working out] methods for preventing a repeat of that in the future.

The acknowledgement of the missing as dead may at least remove one allegation by Tehran. Officials have asserted that Saudi Arabia abducted some of the Iranians who had not been accounted for, including a former Ambassador to Lebanon.

The Iranian Foreign Ministry has supported Russia’s airstrikes on Syrian rebels, which began on Wednesday.

Spokeswoman Marzieh Afkham said, “The Islamic Republic of Iran considers military action by Russia against armed terrorist groups to be a step toward fighting terrorism and toward resolving the current crisis.”