BFM Radio: What is Russia’s Endgame? 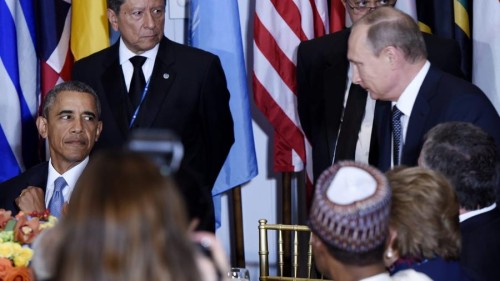 Speaking with Malaysia’s BFM Radio, I assess both the myth and the reality of Russia’s military intervention in Syria to assess Moscow’s strategy — and whether it will work.

Broadcast on Wednesday, the interview was recorded on September 23, before the latest moves by the Russians. These include Vladimir Putin’s speech to the UN General Assembly and today’s indication by the Kremlin that airstrikes are imminent.

See Syria Developing: Russia’s Parliament Approve Use of Armed Forces — Airstrikes Imminent
Syria and Beyond Video Feature: Russia’s Putin to UN “Do You Realize What You Have Done?”

Russia is carrying out a very effective strategy, linking its show of military force with a political initiative.

The first priority is to buy time so the Assad Government doesn’t fall….That, however, leads to a bigger political story. Russia wants to get a political conference…to agree on President Assad staying in power as part of a so-called “transition”.

Russia failed [in August] because of Saudi Arabia….This time they have to the West, “If you don’t get a political resolution, there is the possibility of a military confrontation and we’ll be involved in it.”…

Will Russia succeed? It’s too soon to tell. Russia cannot send military forces across the entire country. So at the very least Syria is going to be partitioned for the near-future….And Russia on its own cannot help or save the Assad regime, given the economic problems it is suffering….

Unless you get rebels to agree to discussions, I don’t think this Russian step ends the conflict. Not by a long way.