Syria Daily, Sept 30: Saudi Arabia “Assad Must Be Leave or Be Overthrown” 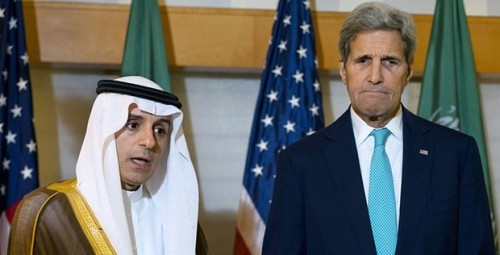 Audio Analysis: What is Russia’s Endgame?

Standing firm against Russia’s proposal for political talks while President Assad remains in power, Saudi Arabia has reasserted that Syria’s leader must step down or be overthrown.

Foreign Minister Adel al-Jubeir said, “There is no future for Assad in Syria, with all due respect to the Russians or anyone else,” Jubeir told reporters in New York after meetings with Saudi allies.

Jubeir said a transitional council reached through a political resolution would be the “preferred option”. Assad would immediately cede power to an executive council with full powers made up of both members of his regime and opposition figures: “And, sometime between the formation of this council and elections -– whether it’s a day or a week or a month, I don’t know -– President Assad would sail into the sunset.”

If this was not possible, the Foreign Minister said, military action “could be a more lengthy process and a more destructive process”.

He concluded, “The choice is entirely that of Bashar al-Assad.”

In mid-August, Jubeir blocked a Russian-Iranian initiative for high-level international discussions, insisting at a press conference in Moscow that Assad must depart before negotiations began.

However, Moscow soon bolstered the effort with stepped-up military intervention. In the past month, it has sent in 34 warplanes, about two dozen attack and transport helicopters, drones, advanced armored vehicles, and several hundred troops as “advisors” for Syrian militia.

The campaign has had some success. The US, Germany, and Britain have all said that Assad can stay in place during the transition, although President Obama emphasized in his UN speech on Monday that “realism…requires a managed transition away from Assad and to a new leader”.

Russian leader Vladimir Putin countered with Moscow’s official line that the fight against the Islamic State requires cooperation with the Assad regime: “No one but President Assad’s armed forces and Kurdish militia are truly fighting [IS].”

Jubeir maintained the focus on the 4 1/2-year challenge to Assad rather than the Islamic State in his Monday statement:

There is a Free Syrian Army that is fighting against Bashar al-Assad.

There is a moderate Syrian opposition that is fighting against Bashar al-Assad and this opposition is getting support from a number of countries. And we expect that this support will continue and intensify.

In contrast to the US and its European partners, who have shifted their line to welcome discussions with Iran as well as Russia, Jubeir said, “Iran is part of the problem and cannot be part of the solution.”

The already-fraught relations between Riyadh and Tehran have deteriorated further in the past month after a crane accident and stampede in the Mecca pilgrimage which killed at least 875 people, including almost 300 Iranians.

Jubeir said, “[Iran] should withdraw its forces from Syria and withdraw the Shiite militias that it inserted into Syria and then it can talk about a diplomatic solution. But what we’re looking at now is Iran is a occupying force in Syria.”

He downplayed Moscow’s campaign when asked whether Russia and Iran might support a transition away from Assad’s rule: “Hope is not that great.”

French authorities have begun a war crimes investigation of the Assad regime for killings and abuses between 2011 and 2013, according to sources including a diplomat.

Prosecutors in Paris opened a preliminary inquiry on September 15, the sources said.

The investigation is focusing on evidence provided by a former Syrian military photographer, “Caesar,” who defected in 2013 and brought about 55,000 graphic photographs of tortured and killed detainees.

Rebels and Kurds Reach Ceasefire After Clashes in Aleppo

A rebel spokesman said on Tuesday night that a ceasefire has been agreed between the Fateh Halab rebel coalition and the Kurdish militia YPG after days of fighting in the Sheikh Maqsoud section of Aleppo city.

A rebel commander has confirmed the agreement in a video circulating on Facebook.

The clashes started in the area when the Kurds sought the establishment of a crossing for trade with a neighboring regime-held district. Each side accused the other of carrying out attacks, including shelling and sniper fire.

Rebels and activists also said the YPG attacked supply vehicles en route to Aleppo, threatening to cut off the only route to rebels in the divided city.

The two sides reportedly agreed last night that the crossing would not be opened. The YPG will remove a barricade on the supply road to Aleppo and cease attacks, while safe passage of Kurdish civilians will be guaranteed.

Rebels also their defense of Sheikh Maqsoud alongside the YPG will be reinforced.