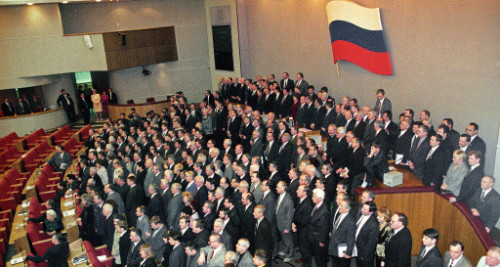 UPDATE, OCT 1: Events are now summarized and updated in our Syria Daily for Thursday, “Russia Begins Bombing of Rebels and Civilians“.

The Russian air strikes, which killed about 40 people today, …represents bold aggression against the Syrian people in all its components. While they reinforce the belief that Moscow has become a partner to the Assad regime in committing war crimes and crimes against humanity and against Syrians, they undermine Russia’s claims about seeking a political solution and about commitment to international law. Russia is in fact popping up a crumbling regime that has lost all legitimacy to rule.

We in the Syrian Coalition hold Russia legally and morally responsible for civilian casualties in Syria, an aggression that was carried out in partnership with the Iranian regime.

UPDATE 1920 GMT: Devastation from the Russian airstrike on opposition-controlled Talbiseh in Homs Province:

A judicial court in northern Homs Province has ordered a curfew because of the airstrikes and attempted assassination of rebel commanders, scientists, and civilians.

UPDATE 1830 GMT: The BBC’s Paul Danahar reports that Russia is already setting up the rationale for its airstrikes on rebels:

Areas attacked include Zaafarana, Rastan, Makarmia, and Talbiseh in Homs Province and Latamenah in Hama Province. Rebel sources confirmed that the Latamenah strike hit the headquarters of Tajamu al-A’aza, a US-backed rebel group that has received TOW anti-tank missiles.

Activists, including the Local Coordinating Committees, claim 50 killed in Talbiseh and 39 slain in other areas.

In addition, Ghanto in Homs Province was attacked by the Assad air force in an operation coordinated with the Russians.

US. Def Sec Ashton Carton on Russian air strikes in Syria: " they were in areas where there were not ISIL forces."

"It's not the kind of behaviour we expect." Def Sec Carter on Russians knocking at US embassy in Baghdad & saying 'We bomb in 1 hour'

Carter said the Russian action was like “pouring gasoline on a fire“.

And the US Secretary of State has now tweeted:

The US supports any genuine effort to fight ISIL, however we will not be confused in our fight against ISIL with support for Assad.

If #Russia's actions reflect a genuine commitment to defeat ISIL, we are prepared to welcome those efforts.

He continued, “We would have grave concerns should Russia strike areas where ISIL-affiliated targets are not operating.”

UPDATE 1820 GMT: The Russian Defense Ministry has confirmed the airstrikes but maintained that they were directed against “the international terrorist organization ISIS [Islamic State]”.

The Ministry said 20 sorties attacked eight targets, including warehouses with weapons, ammunition, petrol, and military equipments; communication hubs; and vehicles were hit. A command post and headquarters were “destroyed completely”, it said.

Footage of an attack:

A Russian analyst says the location of the footage was in Latamaneh, miles away from any Islamic State forces.

Opposition activists report that the attack in Latamaneh was on the headquarters of a rebel unit supported by the US, including through the delivery of TOW anti-tank missiles.

Meanwhile, a senior cleric of the Russian Orthodox Church has blessed the military operations.

“I can say with confidence –— the coming statement of this body that unites Orthodox Christians, Muslims, Jews and Buddhists will support our State’s decision. The decision with which our state again assumes a special role in the Middle East and in particular in Syria,” Vsevolod Chaplin told reporters.

He said the decision not only fully complied with the norms of international law, but also mirrored the views of most Russian people:

The active position of our country has always been connected with protection of the weak and oppressed, like the Middle East Christians who are now experiencing a real genocide. Russia’s role has always been in protecting peace and justice for all Mideast peoples.

Terrorism is immoral and we need to protect those who are being driven from their lands by war.

UPDATE 1800 GMT: Claims are circulating of airstrikes by Russian fighter jets in both Homs and Hama Provinces.

An unnamed US official said Moscow gave Washington a one-hour notice of its operations.

Another US official said a “couple” of Russian bombers targeted fighters in the vicinity of Homs city. A “senior US defense official” said that the strikes were in rebel-controlled areas and that there were no Islamic State forces in the vicinity.

Activists have reported airstrikes across both Homs and Hama Province on Wednesday, with dozens of casualties — including 33 children and a civil defense volunteer in Homs Province, according to the White Helmets civil defense organization. The opposition-controlled town of Talbiseh, north of Homs city, has been hard-hit.

Video shows a child, wounded by shrapnel, writhing in pain. Photos of slain children have also been posted.

The President of the Syrian National Coalition has commented on Twitter:

The targeted areas in today's Russian air raid in #Homs were those areas which fought #ISIL and defeated it a year ago .

A map showing rebel-held territory in pink, with the claimed area of Russian attacks in the red squares, and Islamic State territory in grey: 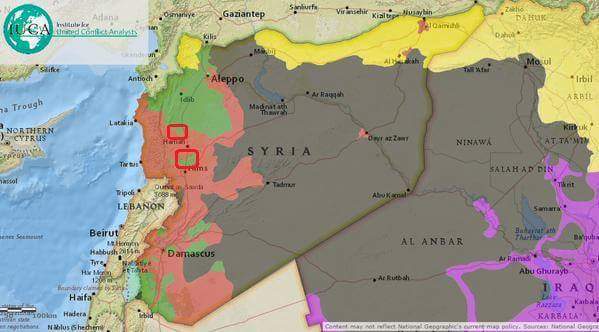 Earlier in the day, Russia sent an official request to the US military to clear air space over northern Syria, according to Pentagon officials. The request was made in a heated discussion between a Russian three-star general and US officials at the American Embassy in Baghdad, sources said.

“If you have forces in the area we request they leave, please” said the Russian general, according to US sources.

A “senior Pentagon official” said the request was not honored. “We still conducted our normal strike operations in Syria today. We did not and have not changed our operations.”

(1-3) A Russian official in #Baghdad informed US Embassy personnel that Russian aircraft would begin anti-ISIL missions today over #Syria.

A statement by Senator John McCain on the airstrikes:

ORIGINAL ENTRY: The upper house of Russia’s Parliament has approved the use of armed forces in Syria, as the Kremlin indicated that airstrikes will begin soon.

The Federation Council granted permission on Wednesday to President Vladimir Putin by a 162-0 vote, according to Kremlin spokesman Sergey Ivanov.

Ivanov pointed to imminent Russian aerial operations in support of the Assad regime:

To observe tinternational law, one of two conditions has to be met — either a UN Security Council resolution or a request by a country, on the territory of which an airstrike is delivered, about military assistance.

In this respect, I want to inform you that the President of the Syrian Arab Republic has addressed the leadership of our country with a request of military assistance.

The spokesman said, “All our partners and allies will be informed today about the decision [to use Russian Air Force in Syria]. Specific information will probably be shared with defense ministries as well.”

He gave the reassurance that there would be no attacks on Syria’s rebles, “The operation’s military goal is exclusively air support of the Syrian armed forces in their fight against [the Islamic State].”

The US, having accepted the Russian military escalation inside Syria, had expressed “great concern” over any Russian operations against forces apart from the Islamic State or the Islamist faction Jabhat al-Nusra.

Putin told Russian journalists on Monday, after his address to the UN General Assembly, that airstrikes were “illegal” as “there is neither a Security Council resolution on the issue, nor a corresponding request from the official authorities in Damascus”.

He said there would be no “participation of Russian army units” on the battlefield, but continued, “We do not rule out anything….If we do act, this will be in strict compliance with the norms of international law.”

See Syria Daily, Sept 29: What Was Said at Putin-Obama Meeting?

The last authorization by the Federation Council of armed force was in March 2014, when it gave permission to Putin for operations in Ukraine.