Syria Daily, Sept 15: US — Russia Expanding Airfield, Defending It with Tanks and Artillery 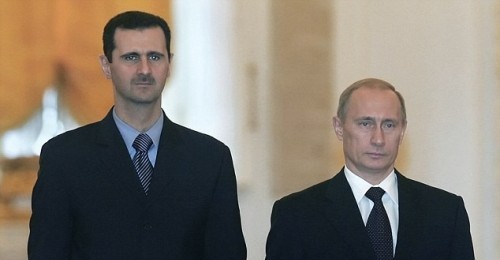 Special: Popcorn and Ice Cream — Reporting on Life and the Syrian Military in Damascus

UPDATE 1615 GMT: In the next phase of Moscow’s campaign for a political resolution keeping President Assad in power as part of the “transition”, the Syrian leader has given an interview to Russia Today.

In the soundbite advertising the program, Assad declares, “Only through dialogue and the political process can we reach political goals that the Syrians should set for themselves.”

Matching the line of Russian President Vladimir Putin (see below), Assad blamed Europe for Syria’s refugee, saying it is “not dealing with the cause”:

If you are worried about them, stop supporting terrorists. That’s what we think regarding the crisis. This is the core of the whole issue of refugees.

“If we ask any Syrian today about what they want, the first thing they would say, ‘We want security and safety for every person and every family’,” Assad asserted.

The full interview will be broadcast on Wednesday morning.

UPDATE 1245 GMT: Russian President Vladimir Putin said on Tuesday that the Islamic State cannot be defeated without cooperation with the Assad regime:

The need of uniting the efforts in the struggle against terrorism is undoubtedly coming to the foreground.

It is impossible without this to solve other essential and intensifying problems, including the refugee problem.

Speaking at a meeting of ex-Soviet nations in Tajikistan, he added that President Assad can be part of the process for a transitional governing authority:

it is also necessary to think about political transformations in that country and we know about President Assad’s readiness to involve the healthy part of the opposition in these processes, in state governance as well.

Putin said Moscow has provided military assistance to Damascus and will continue to do so.

He dismissed allegations that Russia’s military involvement has spurred refugees, saying that the number would be even larger without Moscow’s support for the Assad regime.

The remarks come amid emerging reports of a growing Russian military presence in Syria.

ORIGINAL ENTRY: US officials said on Monday that Russia has positioned tanks and artillery at an airfield it is developing in western Syria, the latest sign of Moscow’s escalating military intervention for the Assad regime.

Two officials said that Russia has positioned six or seven tanks at the airfield. One said that the tanks were T-90s, more advanced than the Russian-made T-55s and T-72s used by the Syrian military.

A US Defense Department spokesman said recent actions by Moscow suggested plans to establish a forward air operating base in Latakia Province in western Syria.

“We have seen movement of people and things that would indicate that they plan to use that base there, south of Latakia, as a forward air operating base,” Pentagon spokesman Captain Jeff Davis told a news briefing.

Last week, satellite images and US officials indicated that Russia had moved in equipment for the expansion, including air traffic control towers and aircraft maintenance supplies. The officials also said prefabricated housing had been delivered for up to 1,000 personnel.

The officials said that there is no sign of attack planes so far at the base.

Military cargo planes from Russia have been arriving in Syria for more than a week. US officials said two a day were making deliveries to the airfield.

Satellite imagery of construction at the airfield:

A Syrian military official said last week that 700 to 800 additional Russian troops had been deployed in Syria to advise President Assad’s militia. Most have been deployed in northeast Latakia Province, where rebels are trying to advance after taking over the northern al-Ghab Plain in neighboring Hama Province. Others are in Tartous Province on the Mediterranean and Homs Province to the east.

A local journalist claims that rebels in Buqayn, west of Damascus, have found a cache of medicine and humanitarian aid in regime warehouses.

The aid was discovered after regime forces left the town without explanation.

“The store included antibiotics, baby milk and diapers, with some boxes even bearing a ‘not-for resale’ UNHCR logo,” Abd al-Wihab Ahmad told Syria Direct. “Regime forces were working with outside vendors to purchase food and other necessities, which they then sell to the encircled populace [at inflated prices].”

“The soldiers at this checkpoint cut a deal with traders to get foodstuffs and medicine in,” Abu Ammar, the head of Buqayn’s only charitable organization said. “The soldiers would demand from the traders twice the price of the goods to be entered, which were then sold to traders inside the city at four times the price.”

Activists published photographs of captured goods, including boxes bearing the logos of the UN aid agency UNHCR, to Facebook on Tuesday.

State Media: 7 Killed in Another Car Bomb in Hasakah

State news agency says seven people were killed and 21 injured on Tuesday in the latest car bombing in Hasakah in northeastern Syria.

A police source said a suicide bomber detonated explosives in a truck in front of the Water Resources building in northwestern Hasakah.

On Monday, 26 people were killed and dozens wounded in a double car bombing in the city, which is controlled by regime and Kurdish forces.

The Islamic State’s assault on Hasakah this spring was repelled after weeks of attacks.

Ex-Finnish President: West Ignored Russian Proposal in 2012 for Assad to Step Aside “At Some Point”

Martti Ahtisaari, the former President of Finland, has said that Western powers ignored a Russian proposal in February 2012 for President Assad to step aside “at some point” in a resolution of the Syrian conflict.

Ahtissari said the Russia Ambassador to the UN, Vitaly Churkin, set out a three-point plan in talks among envoys from the five permanent members of the UN Security Council in February 2012. Under the proposal, Assad was to cede power at some point after peace talks had started between the regime and the opposition.

The former President, who is also a Nobel Prize laureate, said the US, Britain, and France dismissed the plan because they were convinced that Assad was about to fall.

Ahtissari met the five envoys at UN headquarters in New York after an intervention by statesmen including Nelson Mandela, former US President Jimmy Carter, and former UN Secretary General Kofi Annan. He recalled:

I explained what I was doing there and [Churkin] said: “Martti, sit down and I’ll tell you what we should do.”

Ahtissari said he had little doubt that Churkin, who had just returned from a trip to Moscow, was raising the proposal on behalf of the Kremlin.

Responding to the claims, Western diplomats said that Assad’s forces had already carried out multiple massacres by February 2012, and that the main opposition groups refused to accept any proposal that left him in power.

By February 2012, the Assad regime had turned to massive bombing of urban areas, such as the city of Homs, in an effort to push back the opposition and rebels.

Rebels have shot down a military helicopter in southeastern Aleppo Province, near Aleppo city.

A Syrian “military source” said the helicopter was taking off when it was struck. He claimed the aircraft was carrying medical supplies, food, clothing, and other provisions for troops facing the Islamic State’s siege on the Kuweiris Military Airport.

The pilot and crew were killed.