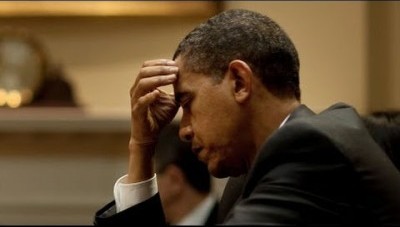 Video: The Rebels Fighting for the South

UPDATE 1900 GMT: Moscow is sending an updated version of an anti-aircraft missile system to Syria, according to “two Western officials and a Russian source”.

The Western officials said the SA-22 system — on its way but not yet in Syria — will be operated by Russian troops.

The Russian source, who is close to the Russian navy, said an SA-22 system had been sent in 2013. However, a Western diplomat said the version of the SA-22 is newer than previous missile systems deployed there.

ORIGINAL ENTRY: The Obama Administration is seeking a response to the stepped-up Russian military intervention in Syria, but there are no indications yet of US measures.

The National Security Council’s Deputies Committee met on Thursday to assess the build-up of Russian equipment and supplies, shipped into Latakia Province on the Mediterranean.

Josh Rogin of Bloomberg News claims that Administration officials are divided between “trying to confront Russia inside Syria or… cooperating with Russia there on the fight against the Islamic State”.

One official, objecting to any plan to work with Moscow against the Islamic State, said, “The Russians’ intentions are to keep Assad in power, not to fight ISIL. They’ve shown their cards now.”

Reports via the Syrian military say that the Russians sent in an additional 700-800 troops last week. Most of the force was deployed in Slunfeh in northeast Latakia Province, close to where rebels have advanced through the al-Ghab Plain in neighboring Hama Province. The soldiers had an advisory role, training regime militia, and would not be on the battlefield.

The deployment accompanies reports of the delivery of supplies for the construction of housing units for the additional troops.

Other evidence points to the development of Russian facilities for oversight of Moscow’s warplanes, piloted by either Syrian or Russian personnel. Recently-arrived equipment includes air traffic control towers and aircraft maintenance supplies.

Two officials said the US intelligence community has information that Russia plans to deploy MiG-31 and Su-25 fighter jets in coming weeks.

The Syrian air force already has SU-25s. However, it does not possess Su-31s, which are used more for defense against enemy aircraft rather than bombing missions.

Last week, the State Department asked both Bulgaria and Greece to deny their airspace to Russian planes transporting military cargo. Obama reportedly did not know about the requests, and criticized the Department for not having a complete process to respond to Moscow’s moves.

Bulgaria subsequently blocked the Russian flights, and Greece said Moscow had avoided a confrontation by flying its planes “to the east”. Russia has reportedly moved both equipment and troops using a path over Iran and Iraq.

Kafranbel Protest: “America and Syria Joined in Tragedy on September 11”

The protesters of Kafranbel in northwest Syria note that the US and Syria are linked by tragedy on September 11: 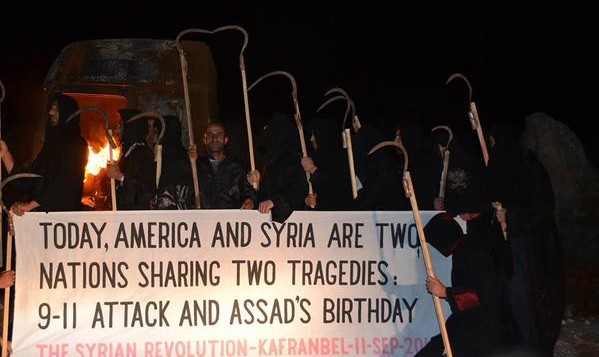 Two different sources have claimed that a Russian sniper has been killed in Zabadani, northwest of Damascus, where a Hezbollah-regime offensive has been trying for more than two months to defeat rebels.

The sources say the sniper was operating behind the frontline. His body was retrieved by regime forces.

If confirmed, the death would be the first of a Russian soldier in the Syrian conflict.

Earlier, pro-opposition accounts said Russian and Hezbollah snipers have been firing with rifles with thermal sights.

Rebels “Kill 100s” in Attack on Adra Prison, north of Damascus, and Nearby Harasta

A rebel spokesman claimed on Friday morning that rebels have taken the nearby hill of Tal Kerdi and part of the women’s prison.

Local activists say the assault by Jaish al-Islam and al-Rahman Corps — who recently merged — is “massive”, with hundreds of regime troops killed, including many Palestinian militiamen recruited from the al-Wafidin refugee camp.

The Damascus-to-Homs highway has been closed by the regime, after Jaish al-Islam captured positions on both sides.

The rebel force has also carried out attacks on the nearby town of Harasta, while the regime has retaliated with more bombing and surface-to-surface missiles on the Damascus suburb of Douma.

Al-Akhbar said the trip was in late August, with Mamlouk seeing high-level military and intelligence officials:
“The visit was crowned by Egyptian President Abdul Fattah el-Sisi receiving the Syrian official.”

The Egyptian regime has officially opposed President Assad, but President Abdel Fatteh El-Sisi indicated his support for an anti-Islamic State alliance during a visit to Russia on August 26.

“Desperation” on 50th Day of Siege of al-Tal, North of Damascus

A council spokesman says there is “desperation” in al-Tal, north of Damascus, after 50 days of siege by regime forces.

Ahmad Bayanouni told Syria Direct that local leaders had met a regime delegation earlier this week. The regime officials said they would open the road and bring in necessities, but the promises have not been carried out, according to Bayanouni.

The nearby towns of al-Hameh and Qudsiya accepted a “reconciliation agreement” last week, but al-Tal’s leaders have refused the demands of the regime.

Most medicine is gone from the pharmacies, especially medicine for those with chronic illnesses such as heart conditions, high blood pressure and diabetes.

The only hospital in the city is on its way to shutting down because of the lack of medicine and its inability to carry out emergency operations and dialysis.

Everything related to surgery or needing electrical devices has been impacted by the blockade and the lack of fuel to work the generators.

A number of deaths have been recorded from chronic illnesses because of the dire situation in the city and the prevention of the sick from leaving to be treated….

The city’s residents have exhausted the food, and there is no food in the stores, 80 percent of which are closed. People have also used up their reserves of food in their homes and are rationing in order to survive.

The Red Crescent and charitable organizations that give assistance to the displaced families in the city have announced that their food reserves have dried up, and they can no longer provide for the displaced.

Bayanouni said, “The regime’s demands are impossible for rebels to carry out, and with the initiatives of city leaders being refused by the regime, I do not see the blockade being lifted soon.”

President Obama has told his administration to take in at least 10,000 displaced Syrians over the next year, according to the White House Press Secretary.

Josh Earnest said on Thursday that the number would rise, beginning in October, from fewer than 2,000 in the past year.

A group of Senators had called on Obama, amid the growing number of refugees in Europe, to admit at least 65,000 displaced Syrians.

However, some Congressmen objected to any additional entries. “Our enemy now is Islamic terrorism, and these people are coming from a country filled with Islamic terrorists,” said Representative Peter T. King, a Republican from New York. “We don’t want another Boston Marathon bombing situation.”

Images of the Islamic State’s destruction of the Roman-era Temple of Bel in Palmyra in Homs Province at the end of August: 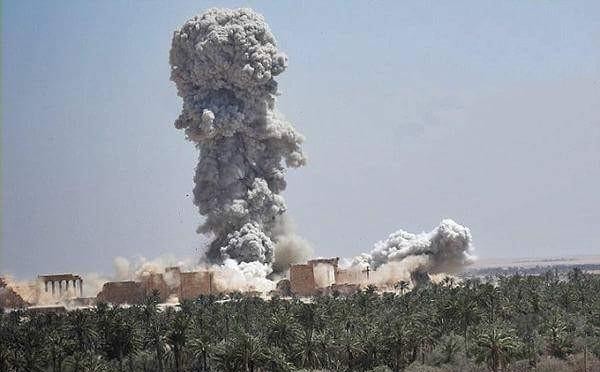 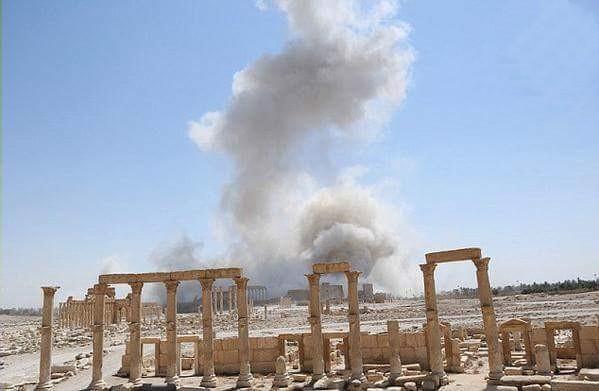 The Islamic State destroyed the temples of Baal Shaamin and Bel, both built about the 1st century A.D., with tons of explosive. The militants had threatened to demolish the Roman structures as “idolatry” since they took over Palmyra in late May.

Turkey Closes Border After Killing of Soldier, Amid Rising Violence with Kurdish Insurgency

Turkey has closed the border with Syria following the killing of a Turkish soldier on Thursday.

The soldier was killed in the Reyhanli district of Hatay Province in southeastern Turkey.

One soldier was killed and another is still missing after cross-border clashes with Islamic State fighters last week near the Turkish town of Kilis. Turkey’s Hurriyet newspaper said the missing soldier was later seen in a hospital run by Islamic State.

Turkish forces are also in an escalating war with the Kurdish insurgency PKK. The Turkish military has suffered a series of casualties, including at least 15 soldiers killed by a roadside bomb last week.

Turkish authorities have responded with states of emergency across eastern and southeastern provinces, locking down towns and cities and carrying out raids which — according to activists and the pro-Kurdish party HDP — have killed a number of civilians.