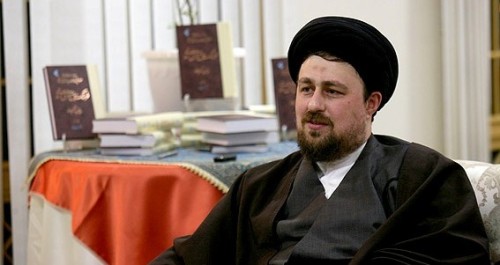 Both Rafsanjani and Khomeini are linked with President Rouhani, who is in a contest for power within the Islamic Republic’s system. The two men have been pursuing alliances ahead of important elections for Parliament and the Assembly of Experts in February, challenging factions within the regime by invoking Ayatollah Khomeini’s words that the will of the Iranian people should be paramount

Ayatollah Mesbah Yazdi, leader of the hardline Resistance Front (Peydari) and an Assembly of Experts member, said of Rafsanjani, “There are those who think they should rule just because they have gone to prison [before the 1979 Revolution].”

Rafsanjani was head of the Assembly of Experts from 2007 to 2011. He lost in the 2011 election and failed to regain the chair in March 2015; however, he is likely to stand again in February.

The Supreme Leader’s representative to the Revolutionary Guards, Mojtaba Zolnour, extended the attack by claiming that Rafsanjani “controls” Hassan Khomeini and has “used” him for personal gain.

Meanwhile, hardline outlets continued to challenge President Rouhani’s attempt to prevent the Guardian Council, which oversees elections, from vetting and disqualifying candidates. The hardline newspaper Kayhan, in an implied warning that the President serves only with the permission of others, reminded Rouhani that the Council approved his candidacy for the Presidency in 2013: “If Rouhani had criticisms of the electoral process, he should not have been a candidate.”

Part of the current challenge by Rouhani stems from the Council’s disqualification of Rafsanjani as a Presidential candidate for the 2013 election. The Council then let Rouhani stand as a consolation for “centrists”, not expecting his surprise first-round victory in June.

Some objections [to the Guardian Council’s rights] are gratuitous….

Elections in Iran are in conformity with the international laws, being regarded as the safest and best elections in the world. Some ill-wishers inside the country, however, try to harm the sound elections and always talk about vote-rigging and cast doubt about soundness of elections in the country.

An Assembly of Experts member, Ayatollah Abbas Kaabi, reinforced the comments, “The Supreme Leader has given the final word on the Guardian Council”. He criticized those who “insist on doubting [the Guardian Council’s] supervision and raise questions about the law, because they…lack the necessary legal qualifications for entering into the governmental institutions of the Islamic system”.

The Supreme Leader’s brother, the reformist Hadi Khamenei, predicted the outcome of “tougher filtering of the candidates” by the Council for the February elections.

Testifying to a Parliamentary committee reviewing the agreement, Jalili — a Presidential candidate in 2013 and the Supreme Leader’s representative to the Expediency Council — chided:

To start implementing the agreement, Iran must take 80 actions; 40 of them are positive and 40 of them are negative. But in this time, the opposing side sets and accepts the rulebook.

Jalili claimed that the deal does not remove sanctions which have crippled Iran’s economy:

Yes, Europe is cancelling its sanctions, but the entire debate is that it [the nuclear agreement] preserves the framework of sanctions. Our question is why this framework must remain when you say that sanctions will be cancelled after eight years….Obama said in a letter to Democratic senators, “Don’t worry; we’ll issue sanctions in other areas.”

He concluded, “America did not accept [our] right of enrichment in Muscat, Geneva, or Vienna.”

Foreign Minister Mohammad Javad Zarif quickly dismissed Jalili’s remarks: “I have no intention of responding to Dr. Jalili. When he was responsible for negotiations, I did not give a single interview [about him] because I don’t recognize arguments as being in the country’s interest.”

Zarif did counter over sanctions: “All of the economic, financial, and European Union sanctions will be cancelled on Implementation Day. All of the sanctions that America imposed on non-American actors – their implementation will come to a halt.”

The Parliamentary committee says it will issue its report on the deal by the end of September.