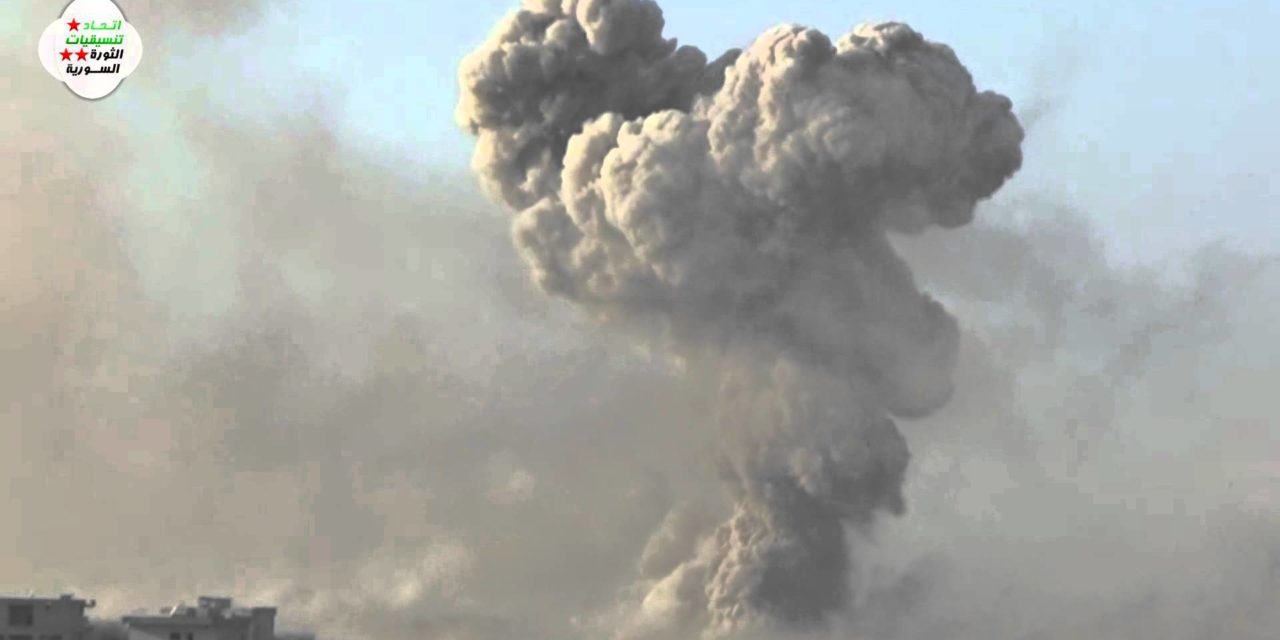 PHOTO: Smoke from a rebel vehicle-borne bomb on the regime enclave of al-Fu’ah in northwest Syria

Op-Ed: The Disaster of Cooperating with Russia

UPDATE 1615 GMT: After further attacks, including a suicide vehicle bomb, rebels have advanced near al-Fu’ah:

ORIGINAL ENTRY: Rebels have renewed an offensive on the regime enclaves of al-Fu’ah and Kafraya, north of Idlib city, in northwest Syria.

The attack by the Jaish al-Fateh coalition began on Friday with 20 “elephant rockets” and nine vehicle-borne bombs, some remote-controlled and some directed by suicide bombers:

Jaish al-Fateh claimed on Friday night that 13 “defensive positions” had been overrun and some buildings occupied in the south of al-Fu’ah (see map). It also took areas to the north and northeast of the enclave.

Rebels have long surrounded the enclaves, and they were further isolated this spring when the opposition took almost all of Idlib Province. Both villages have heavily fortified and defended by regime militia and some Hezbollah fighters. They are surrounded by open ground which exposes attackers to shelling on the ground and airstrikes.

Jaish al-Fateh also attacked at the end of August, taking nearby territory such as the village of Sawagiyeh and threatening to cut the road between al-Fu’ah and Kafraya. The coalition said at the time that it was responding to the Hezbollah-regime offensive against Zabadani, northwest of Damascus, which has tried since July 3 to take the town.

The launch of the attacks:

The Syrian military said it has issued a “Final Warning” to the rebels to halt the attacks. It claimed that it killed a former senior member of Al Qa’eda, Abu Al-Hassan Al-Tunisi, now fighting with Jabhat al-Nusra.

Al-Hassan was reportedly with Bin Laden in Afghanistan and Sudan and later returned to the Afghanistan-Pakistan region.

The US military said on Friday that there are now nine American-trained rebels fighting inside Syria against the Islamic State.

Earlier this week, the head of US Central Command, General Lloyd Austin, told a Congressional hearing that only “four or five” of the 54 US-trained troops — out of 15,000 who applied for the program — were still active.

Washington had said that it would train and equip 5,000 men for the battlefield in a $500 million program authorized in autumn 2014.

CENTCOM spokesman Colonel Patrick Ryder said on Friday that another 11 of the original 54-member force have not yet returned to Syria since being attacked about two months ago by the Islamist faction Jabhat al-Nusra in late July, days after the troops crossed into northern Syria from Turkey.

Ryder said that 14 of the original members were fighting alongside their coalition-supported “parent opposition unit,” but were no longer in the train-and-equip program.

The spokesman said another 18 members were “in Syria, but their whereabouts are unknown”.

Claims are circulating that the Islamist faction Jabhat al-Nusra has executed dozens of regime soldiers at the Abu Duhur airbase, overrun by Nusra and rebel factions almost two weeks ago.

Photographs show Nusra members standing by a row of bodies after the troops were shot. Unconfirmed reports say 56 men were killed.

Abu Duhur, disused and surrounded for more than two years, was the last regime base to fall in Idlib Province in northwest Syria. The executed men appeared to be the force that stayed behind as up to another 250 troops were killed or tried to escape. Only 41 soldiers reportedly made it back to regime lines.

The Syrian military says it has attacked Islamic State positions in Palmyra in central Syria.

The pro-opposition Local Coordination Committees said most of Friday’s 40 deaths in Homs Province — among 107 across the country — were in Palmyra, captured by the militants in late May.