Syria Op-Ed: The Disaster of Cooperating with Russia 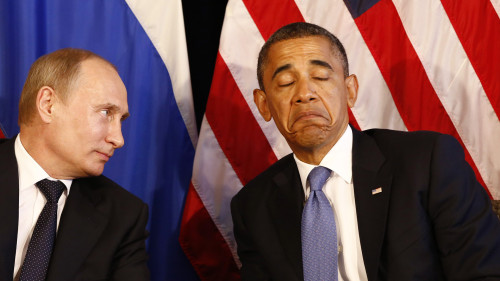 Natalie Nougayrède writes for The Guardian:

“How many did the Khmer Rouge kill? Tens of thousands?” asked Henry Kissinger in 1975 when he sat down with Thailand’s foreign minister to discuss the genocide in Cambodia. “You should tell the Cambodians that we will be friends with them,” Kissinger went on. “They are murderous thugs, but we won’t let that stand in the way.”

That is roughly the message that Vladimir Putin has been sending out as he prepares to take the stage at the UN general assembly later this month: let’s all ally ourselves with Bashar al-Assad — the Syrian president may be a murderous thug, but we shouldn’t let that stand in our way. The Russian leader’s message encapsulates the biggest dilemma western policymakers now face as they confront the spillover from the war in Syria.

Kissinger’s priority in 1975 was to use the Khmer Rouge as a “counterweight” to North Vietnam. Putin’s priority is to cast Assad as the main bulwark against ISIS [the Islamic State], and to position Russia as the centrepiece of a new international strategy on Syria. Russia has moved fast to demonstrate its assertiveness. It has begun a military deployment in coastal areas of Syria controlled by the Assad regime — which has caught western officials off balance.

What does Russia seek to achieve? One old hope has resurfaced: is Putin preparing for a post-Assad Syria, with a peace settlement in the making? There is no doubt that basking in international recognition is something the Russian president would enjoy: remember how, in 2013, he helped Obama wriggle out of his commitment to airstrikes against Syria by arranging a deal over Assad’s chemical weapons arsenal.

Syria-fatigue in western circles has reached such a point that Putin has a good opportunity to cast himself as the man with a plan. Who, he might disingenuously ask, could possibly object to fighting ISIS as part of a wider alliance? But this is precisely the problem. Western failure in the region is one thing, but it doesn’t mean that the Russian President can bring salvation. Quite the contrary.

For a start, let’s put aside naive and wishful thinking. There is no credible sign that Putin is ready to overthrow or replace Assad. Nor was there ever a serious Russian intention to do so, at any point. In the summer of 2012, when the big powers met in Geneva to discuss a Syrian national unity government, Russia made sure that this would not entail Assad’s departure. Russia has consistently shielded the Syrian president — not out of any love for him, but because, after the overthrow of the Qaddafi regime [in Libya], he represents Russia’s last foothold in the Middle East: and its best chance to demonstrate western fickleness.

Second, Putin’s main inspiration on Middle East affairs is Yevgeny Primakov, a former Russian Prime Minister and a long-time pillar of KGB policies in the region. Primakov, who died earlier this year, played an important role in securing tight links between the Russian and Syrian intelligence services. In his book Russia and the Arabs, he theorized about how Russia’s role in the region might reflect its global status and its capacity to counter America’s influence. Primakov also set the Russian tone of denouncing the 2011 Arab Spring as a western plot aimed at regime change that must be opposed.

But Putin’s intentions are best described by the man himself. In a recent interview he was clear about the kind of “political process” he has in mind: “Holding early Parliamentary elections and establishing ties with the so-called healthy opposition, involving them in running the country” — all this “in agreement” with Assad. In a nutshell: fake elections and a fake governing coalition, in a war-torn, decomposing country.

Third, when talking about “anti-terrorism”, it’s important to dwell on the meaning of words. For the west, anti-terrorism means fighting ISIS. For Assad, whose views are supported by Moscow, any political opposition to his rule amounts to terrorism. In the name of “anti-terrorism” he has had tens of thousands of Syrians killed, whole neighbourhoods and cities flattened, and families massacred — not unlike what Putin’s army did in Chechnya. Is this the type of warfare the west will condone by joining a new alliance with Russia and Assad?

It’s not that talking to Putin about Syria is wrong in itself. What counts is what is said and what actions are taken as a result. If Putin is genuinely interested in what the west calls anti-terrorism, then putting an immediate end to barrel bombs and other Syrian government atrocities would be a good place to start. Assad’s military machine is the main cause of civilian deaths — and now it is pumped up with new Russian weapons.

Assad and ISIS feed off each other. It is in Assad’s interests to make sure Syria is viewed — as is widely the case now in the west – as primarily a clash between him and violent extremist jihadism. And ISIS is able to recruit because it claims to defend Sunni populations against the indiscriminate onslaught of Assad’s military.

The Russian logic of propping up a regime that actually fuels, rather than reduces, violent Islamic militancy can be challenged as contradictory. After all, Russia has domestic concerns with jihadism on its southern flanks. But for Putin the political gains of harnessing an ally, demonstrating steadfastness and parading Russian clout in the Middle East – while the west wallows in confusion — largely outweigh that apparent contradiction. Even if one day Assad ends up dead, jailed or on the run, Russia will have, in the meantime, shown resolve.

Putin’s suggestion that the west should embrace Assad is an illusion that will lead to more bloodshed in Syria and won’t solve the refugee crisis. It risks making Syria an even greater hell, if only because alignment with Assad will be met with more meddling by Saudi and Gulf actors who back Sunni Islamic insurgents. It should be rejected with the same kind of disgust that Kissinger’s overtures to the Pol Pot regime inspire to this day.