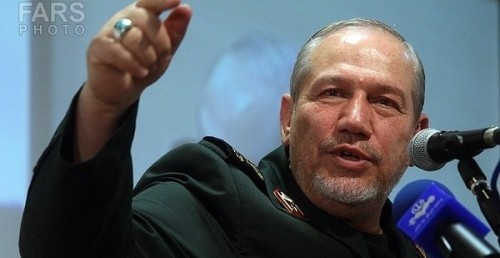 Despite signs of a US accommodation with Russia — along with Iran, the chief ally of Syria’s President Bashar al-Assad — the Supreme Leader’s top military advisor has blamed Washington for “thousands of rented terrorists” challenging the Syrian regime.

General Yahya Rahim Safavi reaffirmed Tehran’s support for Assad, who is under increasing political and military pressure, on Friday: “The Syrian government of Hafez al Assad was Iran’s friend during the Sacred Defense [the 1980s Iran-Iraq War] and this friendly relationship continued during the time of his son Dr. Bashar al Assad.”

The polices of America, the Zionists, and some Arab countries in the past five years [has] sent thousands of rented terrorists to Syria to overthrow the Syrian government, which is the axis of resistance against the Zionist regime [Israel]. This has created the crisis in Syria.

Of course the Islamic Republic of Iran, Russia, and Hezbollah in Lebanon are supporting the government and people of Syria as well as [providing] military consultations to the axis of resistance [Syria].

In the past month, Russia has stepped up its military presence in western Syria, both to prop up the Assad military and as leverage to get high-level political talks maintaining Assad in power as part of a “transition”.

On Friday, the strategy showed some success as US Defense Secretary Ashton Carter called his Russian counterpart for the first time in more than a year to discuss how to avoid accidental clashes.

“The [US] President believes that a mil-to-mil conversation is an important next step,” Secretary of State John Kerry said. “It will help to define some of the different options that are available to us.”

Rahim Safavi also reiterated the Supreme Leader’s declaration last week about the demise of Israel, “It is true that the Zionist regime will collapse and according to the wise words of Imam Khamenei, ‘this regime will not see the next 25 years.”

He concluded, “American power has been broken on regional and global scale; the Americans are no longer the global power.”

An unnamed Government source has pointed to the scale of Iran’s economic difficulties, indicating that oil revenues will be down almost 80% from their high point in 2011.

The source told the Iranian Students News Agency that the Oil Ministry is expecting $22 billion in revenues in 2016-2017, based on a global oil price of between $42 and $50 per barrel.

The Government has tried to cope with the shortfall in income by reducing its budget dependence on oil income from 60% to about 33%.

Rafsanjani: “People Will Teach Radicals a Lesson in February Elections”

Former President Hashemi Rafsanjani, working with President Rouhani to expand their power within the Iranian system, has fired another shot at hardliners.

Speaking with university groups, Rafsanjani looked towards February elections for Parliament and the Assembly of Experts and predicted, “The people will teach the radicals a big lesson like the Presidential election of 2013,” won by Rouhani in a surprise victory over conservatives.

Rafsanjani said the Rouhani Governnment’s policies were succeeding despite the “political obstacles and excuses of its opponents”, and he described opponents of the July 14 nuclear deal as “radical opponents of the national interest”.