Turkey & Syria Analysis: Why Germany Is Withdrawing Its Patriot Missiles — and What’s Missing in the Decision 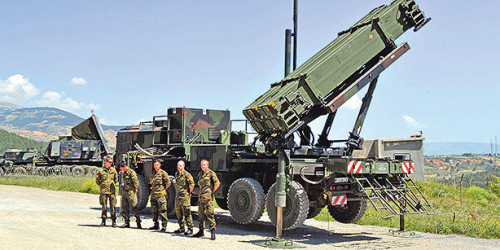 Last month Germany announced that it will withdraw all of its Patriot missile batteries, as well as the 259 troops supporting them, from southern Turkey. Defense Minister Ursula von der Leyen said that, with other NATO partners, Germany would end the deployment in January 2016.

Von der Leyen indicated that the decision was because of a change of approach in the Syrian conflict: the main threat in the country was now the Islamic State, which has no missiles:

The threat in this war-torn region has shifted in focus. It now stems from the terror organization Islamic State. Therefore, we will remain engaged in the region in a continued effort to stabilize it.

However, there are messages in the decision beyond the Minister’s statement. With the withdrawal of the Patriots, Germany is expressing its disapproval of Turkey’s offensive against the Kurdish insurgency PKK — and it is showing that it wants no part of Ankara’s proposal for a “safe zone” in northern Syria.

Moreover, with the US also withdrawing its Patriot batteries, the Germany attitude is likely to be shared by Washington and other NATO countries.

The Patriots were deployed as part of NATO’s Operation Active Fence in January 2013, after a series of incidents on the Turkish-
Syrian border including the downing of a Turkish F-4 jet fighter which killed three pilots and cross-border shelling that killed five civilians. Turkey asked for assistance under the organization’s Article 5: “The Parties will consult together whenever, in the opinion of any of them, the territorial integrity, political independence, or security of any of the Parties is threatened.”

Having faced harsh criticism over its abstention from the UN resolution that was the basis for NATO’s intervention in Libya in March 2011, the Merkel Government joined the US and The Netherlands in committing Patriots. The German Parliament approved the deployment by a 461-86 vote.

Through Operation Active Fence, Germany was strengthening its position in NATO. Berlin was showing that it is willing and capable of engaging in international affairs not only on a diplomatic level but also with troops.

For 2 1/2 years, the 259 troops of the German Bundeswehr have been stationed in the Turkish town of Kahramanmaras, 100 km (62 miles) from the Syrian border. Their mandate was explicitly for a “defensive” role, protecting Turkey, rather than any operations against the Assad regime.

A Shift Against Turkey

In June 2015, a debate started in Germany over Turkey’s possible slide into a renewed armed conflict with the Kurdistan Workers’ Party (PKK) and Ankara’s role in the Syrian civil war. Amid Nouripour, the foreign policy spokesman of the Green Party, said that “the disposition of Patriots in Turkey is not automatic“ and that an immediate reaction would be necessary if Ankara descended into a “state of civil war or became a warring party in Syria or Iraq”.

The deputy party leader of the Left, Tobias Pflüger, was even firmer in the demand for the prompt withdrawal of the Patriots. He said that otherwise the German Government would be “complicit in the Turkish strategy of escalation [which] pulls Germany — via NATO — into this war”.

Even conservative parties criticized Turkey’s politics. The spokesman for defense policies from the Christian Socialist Union, Florian Hahn, said the mission was senseless and Germany as well as the NATO would have to consider carefully if they wanted to be exploited by Turkish President Recep Tayyip Erdoğan. He noted that the Islamic State would not use weapons which could be stopped
by the Patriots.

Ankara’s airstrikes against the PKK’s camps in northern Iraq in late July, with Erdoğan ending the “peace process” pursued since 2012, bolstered the warnings of opponents of the Patriot deployment. So did Turkish attacks inside Syria which struck units of the Kurdish militia YPG.

Meanwhile, the US — while considering the Turkish proposal of a “safe zone” in northern Aleppo Province in Syria — made clear that operations in the area were only to be against the Islamic State and not against President Assad’s forces. Washington emphasized that the strip along the Turkish border would not be a “no-fly zone”.

What About the Original Mission?

As late as January 2015, the German Government published a statement — as it extended the Patriot deployment for a year — that pointed to the threat of the Assad regime:

The Syrian government is able to use its ballistic short-range missiles mobile. Thus it is able to reach targets on almost the whole Turkish state territory in principle. Turkey does not have its own capabilities to repel ballistic missiles and is reliant on help.

In January 2013, NATO was clear that Operation Active Fence was to protect Turkey from Syrian airstrikes. Underlining that mission, the Patriots were not stationed on the border but inland.

The Assad threat to Turkey still exists, even if there have been no recent operations crossing the border. Damascus has repeatedly denounced Ankara’s backing of rebels and warned against safe zones. The warning has been reinforced this month by Russia’s escalating military involvement in western Syria, including the expansion of an airbase for flights which could challenge the safe zones — and Turkish territory.

So Germany’s motives for the Patriot withdrawal are not based on an assessment of the military situation. Instead, they are political, reacting to Turkey’s position in Iraq and in Syria.

NATO was careful in its reaction, saying that Germany’s decision would be “respected“ but that the future of Operation Active Fence was not yet decided. However, the US joined Berlin:

The United States has informed the Turkish government that the US deployment of Patriot air and missile defense units in Turkey which expires in October will not be renewed beyond the end of the current rotation. Other relevant Allies have also been consulted.

In Germany, the announcement was widely appreciated. Claudia Roth from the Green Party said that it was a “proper and necessary move“ as Turkish President Erdoğan spiraled “more and more out of control.“ She asserted that the Turkish strategy to weaken
the Kurds instead of concentrating on fighting the Islamic State was dangerous and wrong.

The foreign policy spokesman of the Social-Democratic Party’s parliamentary group, Niels Annen, said, “The first priority of the Turkish politics appears to be directed at avoiding a Kurdish state“. He continued:

Our first priority is the fight against the Islamic State. Those [two different] objectives are not compatible….Ankara fights IS and the ones fighting IS. Where is the strategy in this?

The German Government is already supplying the Iraqi Kurdish peshmerga with weapons and equipment, and it sees the Syrian Kurdish counterpart YPG as one of the only reliable forces on the ground against the Islamic State. That projection now outweighs the hypothetical threat of ballistic missiles or the Syrian air force to Turkey.

Meanwhile, the withdrawal sends a powerful, if publicly acknowledged, message to Turkey: Germany’s political support for Ankara now rests on a commitment to fight the Islamic State rather than the Kurds. Berlin does not want to get involved in Turkey’s plan for a “safe zone”, which raises the possibility of clashes with the Syrian military distracting from that commitment.

The Missing Strategy against the Islamic State

But if Germany’s strategy towards Turkey is clear, its approach to the Islamic State is not. While Berlin proclaims that the fight against the Islamic State is of the highest priority, its actions so far consist only of arming Kurdish forces in Iraq. The same to NATO and specifically the US, which has not clearly linked its airstrikes to a strategy on the ground in either Iraq or Syria.

What is still missing is an understanding of the Islamic State as a symptom, not the cause, of the troubled region. The militants are not detached from the ongoing Syrian war and a disrupted Iraq. As long as the international community and the region’s countries do not focus on these local conditions, the Islamic State will exist and may flourish.

A long-term strategy of “internal containment” requires a relationships to players on the ground. That includes influential groups who have so far been considered as beyond partnership — whether they are Kurds or “rebels” — because of political calculations.

Germany’s move over the Patriots accomplishes the task of warning the Turks. But the withdrawal puts nothing, in strategy or even a coherent set of operations, in its place.