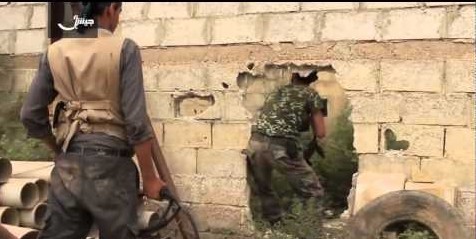 PHOTO: Rebels move on the Adra Prison, northeast of Damascus, on Friday

Syria’s rebels have launched new attacks near Damascus, challenging regime forces northeast of the capital and — according to rebel spokesmen and pro-opposition activists — causing “hundreds” of casualties and taking scores of prisoners.

The assault began earlier this week and escalated on Friday as the rebel factions Jaish al-Islam and the al-Rahman Corps, who recently merged, advanced on the prison in Adra and attacked in the nearby town of Harasta.

The rebels took the hill of Tal Kerdi. They also occupied part of the women’s prison, whose detainees have reportedly been evacuated, before they were pushed back.

Another hill was taken between Damascus and Harasta, which has faced a series of attacks by the rebels in the past month. The Syrian military also had to close the Damascus-to-Homs highway after Jaish al-Islam captured positions on both sides.

Reports over 100 regime forces/militias were killed in clashes with JAI in E. Ghouta today & over 70 taken prisoner. #Damascus #Syria

The attack on Adra Prison:

The Syrian Air Force has been restricted this week because of sandstorms, but the Assad regime retaliated with surface-to-surface missiles on the Damascus suburb of Douma, where Jaish al-Islam is based.

Army units clashed with a terrorist group which tried to infiltrate to some military checkpoints in Adra area and Tal Kurdi to the northeast of Douma city in Damascus Countryside.

The clashes resulted in the death of many terrorists, injuring many others and seizing their weapons and ammunition.

SANA also denied that rebels had taken the hospital in Harasta and the farms on Tal Kerdi.

Syria’s Information Minister has rejected a proposal, put out by Britain on Wednesday, that President Assad could lead a “transitional governing authority for up to six months” as part of a political resolution to the conflict.

“What gives the British foreign secretary the right to decide for Syrians how long their president should stay in power?” Omran al-Zoubi told The Guardian of London in an interview in Damascus.

The British — probably acting on behalf of partners like the US, and following a proposal by UN envoy Staffan de Mistura that made little headway — put out the six-month proposal through Foreign Minister Philip Hammond, even as Prime Minister David Cameron said that both Assad and the Islamic State “have to go”.

See Syria Analysis: A British Strategy on the Way?

Al-Zoubi said Britain was following “irrational and illogical” policies by attacking the only country seriously fighting Isis and other terrorists and urging Assad to step down.

Competing Claims over State of Hezbollah-Regime Offensive in Zabadani

There are more competing claims over the state of the Hezbollah-Regime offensive to take the town of Zabadani, northwest of Damascus.

The offensive is entering its 11th week with Hezbollah and Assad forces still trying to overcome the resistance of rebels in the town, the first captured by the Free Syrian Army in January 2012.

Pro-Assad outlets claim a further advance in the town center and the decimation of rebels from Jaish al-Islam when they attacked outside Zabadani to relieve the pressure.

However, a spokesman for the Jaish al-Fateh rebel coalition asserts that 18 Hezbollah and 12 regime fighters were killed in a rebel counter-attack. He says a checkpoint was taken, and heavy equipment, weapons, and ammunition were captured.

The spokesman also claims that “Russian mercenaries” have entered the battle.

On Friday, rebel sources claimed that a Russian sniper had been killed in Zabadani, but that the Hezbollah-regime forces had retrieved the body.

Lavrov chided the US approach while calling for support of the Assad regime, “You cannot defeat Islamic State with air strikes only. It’s necessary to cooperate with ground troops and the Syrian army is the most efficient and powerful ground force to fight the IS.”

Obama responded during a discussion with US military personnel, “The strategy they’re pursuing right now of doubling down on Assad is a mistake….It could prevent us from arriving at the political solution that’s ultimately needed to bring a peace back to Syria”

State Media: 5 Killed and Dozens Injured in Damascus by Mortars

State media say five civilians were killed and dozens were injured in Damascus on Friday night by mortars, which they claim were fired by rebels.