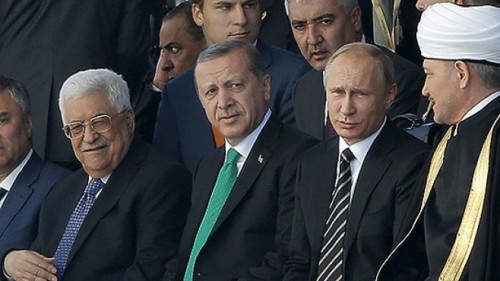 Analysis: Assad’s Hold on State Institutions — and Why the Russians Are Involved

UPDATE 1900 GMT: Turkish President Recep Tayyip Erdoğan has emphasized that his acceptance of Bashar al-Assad’s involvement in a “transition” does not mean that the Syrian President can remain in power.

Erdoğan said on Friday that depiction of his line as a change in policy was “intentional efforts” by critics to misrepresent him:

The President called on Assad to leave power if he has “the slightest bit of love for Syria”.

Erdoğan was speaking after talks in Istanbul with the emir of Qatar, a leading ally of Turkey in support of the Syrian opposition and rebels.

UPDATE 1630 GMT: At first glance, the US military has taken a tougher line with Russia, telling Moscow not to target Syrian rebels with the aircraft and weapons that it is bringing into Syria.

US Central Command issued a statement on Friday:

"…they say is the cause of their deepening work in Syria – we would look upon that with great concern."

CENTCOM continued, “[We] will not speculate on what we would do in that instance, but suffice it to say, attacking the moderate Syrian opposition would call into question Russia’s stated intention of countering ISIL [the Islamic State] in Syria.”

However, analyst Thomas Pierret is sceptical and says the “great concern” may actually be a signal that the US will stand aside if Russia attacks:

In my view, saying you’ll be concerned isn’t a warning at all. In plain English it means, “We’ll protest. but stay idly by.”

I rather think US is de facto okaying Russian airstrikes against any target. Note in particular, the absence of word “consequences”.

ORIGINAL ENTRY: There was more success on Thursday for Russia’s power play in Syria, linking military intervention with the acceptance of President Assad’s rule in the short-term.

German Chancellor Angela Merkel said on Thursday that Assad should be involved in talks about a political resolution. So did Turkish President Recep Tayyip Erdoğan, shifting his position that the Syrian President must be removed from power as quickly as possible.

“We have to speak with many actors, this includes Assad, but others as well,” Merkel told a press conference. “[The talks should be] not only with the United States of America and Russia, but [also] with important regional partners [like] Iran and Sunni countries such as Saudi Arabia.”

Erdoğan did maintain that Assad would have to leave when the political transition was completed:

Either a transition process without al-Assad, or with al-Assad, is possible. But what is the required is the opposition….Nobody can foresee Syria’s future with al-Assad. It’s not possible to accept a person responsible for killing 300,000 to 350,000 people, a dictator.

The Turkish President said he and Russian counterpart Vladimir Putin had agreed, in talks in Moscow on Wednesday, to launch a new working group on the Syrian crisis with Washington. He said Iran and Saudi Arabia, as well as the European Union, Jordan, and Qatar, could be involved.

Neither Merkel nor Erdoğan criticized the Russian military escalation which has changed the political environment. In the past month, Moscow has expanded an airbase in western Syria, brought in at least 28 advanced fighters jets and about 25 attack and transport helicopters, delivered advanced armored vehicles to the Syrian battlefield, and deployed several hundred troops as “advisors” to Assad’s militia.

The effort has been linked to a revival of an effort for high-level international talks, cut short in mid-August when Saudi Arabia insisted on Assad’s departure before any negotiations.

Earlier this month, British Foreign Secretary Philip Hammond said Assad could remain for “up to six months” during a transition. German Foreign Minister Frank-Walter Steinmeier and US Secretary of State John Kerry gave further support last week, with Kerry saying that Assad did not have to step down on “Day 1″ or “Month 1″ of discussions.

Russian Foreign Minister Sergei Lavrov said on Wednesday, “I think that now the Americans are much more perceptive to the arguments we have been offering for the past several years.”

The current U.S. administration wants to find a solution to the crisis in Syria. There is a tacit agreement between the U.S. and Russia to reach this solution.

The U.S. recognizes now that Russia has profound knowledge of this region and a better assessment of the situation.

Israel also gave support to the Russian initiative this week as Prime Minister Benjamin Netanyahu visited Putin in Moscow. The Israelis agreed to a military coordinating committee with the Russians to prevent any accidental clashes as Moscow stepped up its forces in Syria.

However, there was one sign of resistance on Thursday to Russia’s initiative. The US State Department said Washington would not consider Moscow’s draft statement for the UN Security Council, calling for a fight against extremist groups “in coordination with the governments of the affected states”.

Assistant Secretary of State Sheba Crocker indicated that the declaration was an effective endorsement of President Assad, telling reporters:

We have concerns that a Council Presidential statement could be perceived as endorsing an approach that could set back efforts to reach a negotiated political transition in Syria.

[It is at] significant variance with the ongoing efforts of a coalition of more than 60 countries, including all of Syria’s neighbours to counter ISIL [the Islamic State].

President Obama will meet Russian counterpart Vladimir Putin at the UN on Monday.

Rebels have launched a new offensive southwest of Damascus, seeking to connect their areas of Quneitra Province in southwest Syria with the West Ghouta area near the capital.

The Revolutionary Forces of Syria Media Office lists the rebel forces involved and says they are advancing on one of their objectives, the regime’s Brigade 90 base.

Another opposition site said a Shilka mobile weapon system and heavy weapons have been destroyed. It cites regime casualties, while saying the toll is still unknown, and says six rebels have been killed.

The offensive comes less than two weeks after a rebel push on the other side of Damascus took territory to the northeast of the capital. The advance, led by Jaish al-Islam, claimed areas near Adra and Harasta, threatened the regime’s military complex in Dahliyat al-Assad, and cut the Damascus-to-Homs highway.

If both offensives succeed, they will establish supply lines between areas which have been besieged by the Syrian military for years and, conversely, threaten to ring Damascus with rebel-held positions.

The Institute for the Study of War has published a series of satellite photographs of the build-up of Russian warplanes in Latakia Province in western Syria.

Rescuers retrieve a body from the rubble of a house after a regime airstrike on Douma, northeast of Damascus:

Hundreds of civilians have been killed in the suburb during the summer and autumn as the regime tries to break rebels, especially the Jaish al-Islam faction which is based in the area, and residents through bombing.

In an interview to be broadcast on US television on Sunday — the eve of his meeting with President Obama in New York — Russian leader Vladimir Putin has given the rationale for Moscow’s escalating military intervention and political maneuvers:

Any attempt to destroy the legitimate government will create a situation which you can witness now in the other countries of the region or in other regions — for instance, in Libya — where all the State institutions are disintegrated….

There’s no other solution to the Syrian crisis than strengthening the effective Government structures and rendering them help in fighting terrorism, but at the same time encouraging them to engage in dialogue with a rational opposition and conduct reform.

Putin repeated the formula, also used by President Assad, that “it’s only the Syrian people who can decides who governs Syria and how”.

Reports: Ceasefire Agreement Being Implemented Over Areas in Damascus and Idlib Provinces

Reports are circulating that rebels and Iranian officials, representing the Assad regime, have finally confirmed a six-month ceasefire covering both the rebel-held Zabadani in Damascus Province and two regime enclaves in Idlib Province in northwest Syria.

Last week, following a 72-hour halt to fighting in the areas, there were claims of an agreement for six months. A three-month Hezbollah-regime offensive would finally be able to claim Zabadani, 31 km (19 miles) northwest of Damascus, with fighters and any remaining civilians evacuating to Idlib Province.

Meanwhile, women, children, and men over 50 would leave the regime enclaves of al-Fu’ah and Kafraya, north of Idlib city, and rebels would allow supplies into the long-besieged fortified villages.

The agreement, reportedlyn to be overseen by the UN, was negotiated between the rebel faction Ahrar al-Sham and Iranian officials.

Sheikh Muhammad al-Mohaisany, a Saudi cleric with the rebels, said the first group of wounded fighters from Zabadani had arrived in Idlib:

A Jaish al-Fateh official also spoke about the deal. He did not go as far as Mohaisany, saying that the parties have agreed on the provisions but are “working to agree on the mechanisms to implement” them, such as the evacuations from Zabadani and the enclaves.

Video: Eid al-Adha Celebrations for Children in Idlib and Yarmouk

Children enjoy festivities for the Eid al-Adha religious holiday, with rebels from the Jaish al-Fateh bloc participating, in Idlib city in northwest Syria:

In East Ghouta, near Damascus, the celebrations are in an underground bunker:

And in the Yarmouk camp in southern Damascus, devastated by years of fighting and sieges: 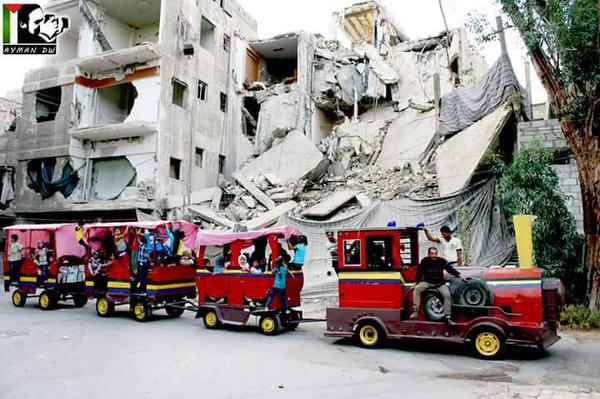