Syria Analysis: Assad’s Hold on State Institutions — and Why the Russians Are Involved 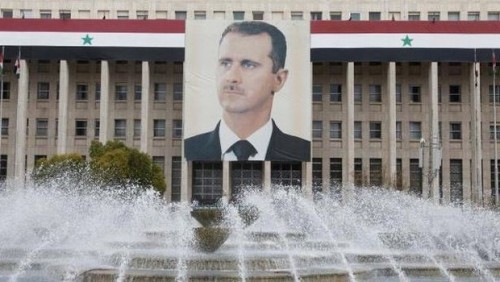 PHOTO: A poster of President Assad on the Central Bank building in Damascus

Kheder Khaddour writes for the Carnegie Endowment for International Peace about the Assad regime’s control of the Syrian State.

The article, originally posted in mid-August, takes on further relevance with recent events such as Russia’s escalation of military intervention. Khaddour writes:

The Russian priority is to keep the Syrian state alive, but for the Russians, supporting the Syrian regime is the only way to guarantee this. The greatest threat for Russia is the collapse of the Syrian state and its institutions. This would lead to the unraveling of forty years of Russian political and military relations with Syria. Because the regime is the best channel available for protecting this relationship, the Russian government will continue supporting it.

International actors have invested years of resources and diplomacy in the quest for a negotiated solution in Syria, but they have failed and will continue to fail unless they are able to break the monopoly that President Bashar al-Assad’s regime holds over state institutions. These institutions are what make the regime a player in international politics, rather than a mere client, and its control over the Syrian state is what allows the regime to block concessions demanded even by its backers.

For good reason, focus has been directed at the fragmented state of the opposition as a roadblock on the path to negotiations. Yet another more fundamental hurdle must also be faced: the regime remains in firm control over the public goods and services distributed by the Syrian state.

A Hijacking of the State

In Syria, the “state” and the “regime” are not the same thing. The state is the apparatus that administers the country and provides services, including education, health, and official papers that allow Syrians to marry, register property, or travel outside the country. The regime is a collection of informal networks based on personal, family, community, religious, and other ties that control the upper ranks of the state apparatus.

Before the uprising, most Syrians had an informal understanding of this distinction, particularly in areas of the country where social services were well-provided. In short, they were able to draw a line between the local branch of the Ministry of Water Resources, to which they could appeal if they had problems with their water supply, and the plainclothes officer from the Political Security Directorate who came inquiring at their door.

During the war, the regime has managed to blur this distinction to its advantage. In the Damascus suburb of Barzeh, for example, one of the terms of a ceasefire concluded in early 2014 was that state services would return to areas under rebel control. Under the terms of this agreement, government employees repaired public services and reopened clinics and schools. The perception among Barzeh’s inhabitants, however, was that the services were coming from the regime. Civilians asked the local rebel factions not to break the ceasefire so they would not be displaced again, signaling that the services distributed by the regime through the state had bought public acceptance of the regime.

Providing access to the goods and services of the state also gives the regime legitimacy among many Syrians and foreign governments, by allowing it to present itself as a real state. This dynamic is not lost on the regime. In a recent interview with Foreign Affairs discussing the prospects of negotiations with the opposition, President Bashar al-Assad sought to present this as a key difference between his supporters and opponents:

Who do you negotiate with? As a government, we have institutions, we have an army, and we have influence, positive or negative, in any direction, at any time. Whereas the people we are going to negotiate with, who do they represent? That’s the question. When you talk about the opposition, it has to have meaning.

Both the nature of the conflict—local forces fighting a standing government—and foreign donors’ habit of favoring factions aligned with their own ideological or strategic interests have led to a fragmentation of the opposition. Provincial biases are another problem, as they make rebel groups strong in villages under their control but often unwilling to subordinate themselves to a leadership based elsewhere, or to the exiled opposition.

Despite their claims to local legitimacy, rebel factions rarely have more to offer residents than the exiles they so often criticize. They have a very limited ability to provide health and education services or civil administration. Many of those efforts, hampered by local rivalries, are further impeded by the regime’s continuous bombing campaigns.

For the regime, a loss of territory, as in eastern Aleppo, is not fatal so long as it can maintain its hold on the remaining state institutions and destroy any alternative service structure set up by the opposition. As long as the regime succeeds in doing this, even many pro-opposition Syrians living in opposition-controlled territory will be forced to retain links to regime-controlled state institutions. In some sense, they will therefore also remain under Assad’s influence.

The same principle holds in regime-controlled areas. Residents of these areas may feel little fondness for Assad, but they have no alternative but to continue supporting his regime because of their need for state services. In short, territorial control is of limited importance so long as the central institutions of the state, and the services flowing from them, remain monopolized by the regime.

If these same services—under the auspices of the extant Syrian state and not a provisional government or aid organization—could be provided in areas outside the regime’s territorial control, many Syrians would be less dependent on the state institutions monopolized by Assad, and thus on Assad himself.

The regime’s hijacking of the state poses a dilemma not just for its opponents, but also for Assad’s foreign backers, chief among them Russia and Iran. Although in theory they might prefer a negotiated solution that preserves their core interests in Syria, the regime’s hold on the state means that they are forced to work with Assad to safeguard these interests. This is what has ensured that Assad remains a player in international politics, rather than a mere client.

Iran’s first priority is to protect its strategic axis of supporters and allies in the Middle East, from Tehran via Baghdad and Damascus to the Hezbollah movement in Lebanon. Iranian military and financial support has deepened the Syrian regime’s dependence on Iran, but it has not allowed Tehran to penetrate Syrian state institutions as it has done in Iraq. The structure of political power in Iraq is divided, which permits Iran to exploit competing factions within and on the fringes of state institutions. This option is not available in Syria, where Assad’s regime is unified and in sole control of the state.

The relations between Tehran and Damascus continue to be balanced. For example, Iran has attempted to undermine Syrian military institutions and make the regime more dependent upon Iranian-backed militias. The regime, in turn, has tried to keep the Iranians out of politics inside the military institutions, pocketing Iranian material support and enrolling Iran-funded militias in its armed forces, while keeping all of them under the surveillance and management of the official Syrian Arab Army. It has largely succeeded in doing so. Iran-backed militias fighting under the auspices of the government, like the National Defense Forces or the Commandos (al-Maghawir), all receive extensive training and equipment from officers in the army and their leaders work in close coordination with military officials.

Though the nature of Russia’s interest in Syria is completely different, it too must work through the Assad regime to pursue its goals. The Russian priority is to keep the Syrian state alive, but for the Russians, supporting the Syrian regime is the only way to guarantee this. The greatest threat for Russia is the collapse of the Syrian state and its institutions. This would lead to the unraveling of forty years of Russian political and military relations with Syria. Because the regime is the best channel available for protecting this relationship, the Russian government will continue supporting it.

The Russian position with respect to the Syrian Arab Army provides the best example of this. From the very beginning of the uprising in 2011, Russia has invested heavily in the army, increasing its military and strategic support to prevent a disintegration of the armed forces. The regime, in turn, has demonstrated that it is the one power able to ensure the cohesion of the army from the Syrian side.

An Alternative for State Institutions?

The political solution envisioned in the Geneva Communiqué, also known as Geneva I—a document signed in June 2012 by the United States, Russia, and several other governments—requires the link between the regime and Syrian state institutions to be dismantled.

Under such a scenario, it would be impossible for the regime to persist. It would likely lead to the dismantling of not only the regime but its networks in the state and society. But the present situation contrasts sharply with this vision and is the best scenario possible for the regime. It allows the regime to claim that it is the Syrian state and thus the sole representative of the Syrian people, and it allows Assad to remain the only option for his international backers.

Breaking this stalemate requires regional and international will and forms of support that go beyond merely seeking opposition military advances. Rather, international actors need to support the opposition in developing links between political groups outside the country and the civil and military groups on the ground in order that the opposition might eventually take over the management of Syrian state institutions in the areas it controls. This is no easy task; it has been tried and failed before. But to the extent that international action can remove the state from the hands of the regime, it will brighten the currently bleak prospects of a negotiated solution in Syria.