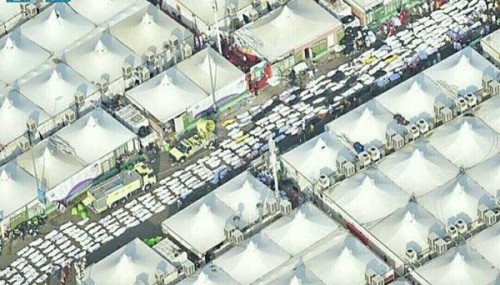 PHOTO: Bodies laid out after Thursday’s crush in Mecca during the hajj pilgrimage

Iran’s regime has denounced Saudi authorities over Thursday’s stampede during the Mecca pilgrimage that killed at least 717 people and injured more than 850.

At least 131 Iranians are among the dead. The disaster follows the deaths of 118 people — 11 of them Iranian — with almost 400 injured, when a crane collapsed near Mecca’s Grand Mosque on September 11.

The Supreme Leader led the criticism of Saudi management of the hajj: “The Saudi government is obliged to accept the heavy responsibility in this tragedy and to work for the rule of justice and equity.”

Misconduct& improper acts causing #MinaStampede can’t be ignored. Condoling with the mournful, I announce 3 days of public mourning in Iran.

Saudi govt. has to accept its heavy accountability in this bitter incident & take necessary measures based on justice & rights.#Minastampede

In a message on Wednesday, Khamenei’s office had highlighted Saudi responsibility for the crane accident:

Commitment to and fulfilling responsibility by those in charge of ensuring safety of God’s guests is our firm demand. pic.twitter.com/y5on0MFDhv

Deputy Foreign Minister Hossein-Amir Abdollahian said the Saudi chargé d’affaires in Tehran would be summoned over the incident: “Under no conditions can we be indifferent toward Saudi Arabia’s irresponsible behavior.”

President Hassan Rouhani has established a special committee to investigate the event and to help with the “immediate support, transport of injured and diplomatic relations”.

Meanwhile, senior Government officials joined the denunciations. Iranian Vice President Eshagh Jahangiri said, “The protection and security of the hajj is the responsibility of the Saudi Arabian government, and they have to act upon their duties, and the consequences of any negligence in this duty is on the government of Saudi Arabia.”

Alaeedin Boroujerdi, chair of Parliament’s National Security Commission, called for Riyadh to be stripped of oversight of the pilgrimage, made by an estimated two million Muslims this year:

Saudi Arabia’s government has shown that they do not deserve management of the hajj because of two regretful incidents in a short period of time. It has been proven a number of times that Saudi Arabia does not have the competence or efficiency to conduct the hajj.

Fars News, linked to the Revolutionary Guards, put out the most provocative claim: “Sources revealed that the convoy of Saudi Arabia’s Deputy Crown Prince and Defense Minister Mohammad bin Salman Al Saud caused panic among millions of pilgrims and started the stampede that has so far claimed the lives of 1,300 in Mina, near Mecca, on Thursday.

The episode is likely to further damage the Government’s hopes of “engagement” with Saudi Arabia, long challenged by hardliners within the regime. The Foreign Ministry has been proclaiming the need for discussions with Riyadh on regional crises, from Syria to Yemen, but no substantive meetings have followed.

The crane accident two weeks ago also brought claims that the Saudi monarchy was incompetent and could not be trusted with the affairs of the country or the region.

The Supreme Leader, who only extended condolences to Iranians on that occasion, was careful yesterday to include all pilgrims in his message:

My representatives in #Hajj must offer any possible aids to pilgrims from other nations as well to fulfill the duty of Islamic brotherhood.

In a shift of his public line, Rouhani chided Saudi Arabia over its failure to work with Tehran in dealing with “terrorists”. Speaking to journalists just before his departure for the UN General Assembly in New York, the President said:

Everyone acknowledges that if [a country] wants to really confront terrorism, this is only feasible with the cooperation of Iran.

If there was no Iran or its armed forces, and if there was none of the Supreme Leader’s guidance, there would be no Baghdad or holy shrines; even Mecca and Medina would be occupied by terrorists

Former President Hashemi Rafsanjani, an ally of Rouhani and a long-time advocate of engagement of Saudi Arabia, has joined the criticism of Riyadh: “The Saudi must answer to the Islamic World for this tragic disaster.”

Hashemi denied on Friday that he had made the statement in the interview.

The mother of physicist Omid Kokabee, imprisoned since January 2011, has called for her son’s freedom in a letter to the Supreme Leader.

For the fifth consecutive year, when the academic year begins, in a country whose leader emphasizes scientific progress so much, I ask myself, should Omid be studying in class, or in the corner of a prison cell? Do not let us repeat this question again this year.

I request that you order the release of my dear Omid on the occasion of the opening of schools. He is the son of this very land and was thanked and commended for winning a medal in the [Physics] Olympiad … when he met you as a member of a group of top students in 2003. Return him to where he belongs, that is in the arms of learning and academia.

Haghnazari noted that throughout his prison stay, Kokabee has not been allowed to have meetings with his lawyer granted temporary furlough, or received treatment, despite his poor medical condition.

Kokabee, 32, was a doctoral student at the University of Texas when he was arrested at Imam Khomeini Airport as he was about to leave Iran after visiting his family. After 15 months of detention, he was sentenced to 10 years in prison for “contact with enemy states” in May 2012.

In an open letter from Evin Prison in 2013, Kokabee said he was arrested because he had turned down a request from Iranian security agents to cooperate on a military research project.

Teachers’ rights activist Rassoul Badaghi, who was nearing completion of a six-year prison sentence, has been condemned to an additional three years.

Badaghi’s lawyer, Peyman Haj-Mahmoud Attar, said the new sentence was imposed by a Revolutionary Court for “insulting Imam Khomeini and the Supreme Leader” and “propaganda against the state”.

Badaghi, a board member of the Iranian Teachers Association, was arrested on September 2, 2009, for his activitism. He was given the six-year sentence in August 2010.

Thousands of teachers have been protesting throughout Iran over wages, working conditions, and the imprisonment of activists.

Independent unions are not allowed to operate in Iran, strikers often lose their jobs and risk arrest, and labor leaders who attempt to organize workers and bargain collectively are prosecuted under national security charges and given long prison sentences.