Syria & Beyond Feature: How to Help Refugees

#EuropeSaysWelcome, #WelcomeRefugees, #MigrantCrisis, these are just some of the hashtags people are using to share their feelings on the situation of refugees fleeing to Europe. Here are some of the ways people are responding….

People often speak about the “one picture,” the one image that is so powerful and so shocking that it travels the world, inciting people to action. The most famous example is the 1972 picture of nine-year old Phan Thị Kim Phúc fleeing napalm bombs with severe burns on her back. There are some who say that the image was what finally made the U.S. end its war with Viet Nam.

While it is a powerful image and has come to represent all that is horrific in war, it did not end the war. There had been an active anti-war movement for at least nine years by then. Had the photo occurred earlier, it is doubtful that it would be linked to change.

The same can be said of the picture of the heartbreaking image of 3-year-old Aylan Kurdi, whose body washed up on a beach. The image is powerful, heart rending. But it is not the first horrific image and it will not be the last. The power the image has to change minds and spark action is the result of years of work by activists and politicians in support of refugees and asylum seekers.

Civil Society is the Key

An integrated approach involving local governments, the political elite, the administration, and NGOs is necessary to absorb the refugees.

Poltical analyst Dr. Hajo Funke states that the role of civil society has been critical in influencing public opinion and shoring up support for refugees in Germany. Hundreds of thousands of people are involved in working to support refugees either as volunteers, members of NGOs, or government employees. There are many NGOs offering practical, professional support to people fleeing their home countries.

In train stations all over Germany, ordinary citizens came out in droves to welcome refugees who are coming primarily from Syria. Farin Fakhiri, who came to Germany as a refugee said for the first time she felt proud to be a German:

On Facebook one German citizen describes how her mother came to accept refugees:

My parents are vacationing in Hungary right now, and I just got an email from my dad bitching about how it took my mother meeting a terrified refugee mother and her small child to recognize that she’s been ridiculous in her complaints about Germany taking them in.

I hate how Germany’s right wing has been influencing people who don’t like to think and who feel entitled to the whole pie. I get that there are people wealthier, but [my mother] lives in a great house, has her own car, enough to eat, world-class inexpensive medical treatment, and can vacation, all thanks to German subsidies. Time to share.

Many others are sharing the before and after images of a man arriving on shore crying while holding his child and then smiling when united with family. 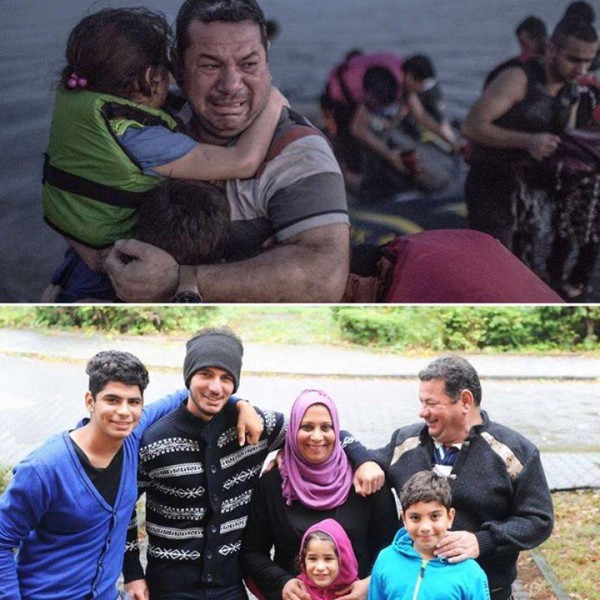 Put Your Money Where Your Mouth Is

Civil society organizations work long and hard to care for migrants, refugees, and asylum seekers. Many have seen a dramatic increase in donations of time, money, and goods over the past few weeks, particularly after the photo of the toddler, Aylan Kurdi, dead on the beach. “Practicality is decisive,” says Funke.

Be In It For the Long Term

Dr. Halleh Ghorashi, Professor of Diversity and Integration at VU University in Amsterdam, reminds people that it is important to support refugees, migrants, and asylum seekers over the long term trajectory of their lives.

Refugees are fleeing violence. They need special attention as a result of that experience. A good beginning in a new country makes a huge difference over the course of an entire life.

What if that was me stranded hopeless by a train station in Syria?

Why are people leaving in such large numbers now? Journalist Borzou Daraghi quotes Syrian activist Yasser al-Hajj: “They lose hope in Syria, and they lose hope that the international community will create a solution for Syria.”

For many who have had the experience of leaving their home as refugees, the images of desperate families setting out on life threatening threats has reminded them of their own past. The family of Tahirih Danesh was forced to flee Iran because of their Baha’i beliefs.

I know what it’s like first hand to be a child and a refugee. For me the journey was in a comfortable air conditioned 4×4 and took a matter of days, but its scars remain. I know first-hand how dehumanizing the process of becoming a refugee is. What the Germans are doing now, welcoming the refugees, is what those families need. They need friendly and loving refuge. They need to be re-humanized.

I know what it means to be given refuge and much of it is in the hands of individuals. The Syrian crisis in Europe is showing us, not withstanding state duties, you and I have the power to uphold each other’s human rights. This is what “universal” human rights culture calls for. In this light Hungarians need to take a lengthy pause to examine their values and remedy the historic deficit this episode has brought to their attention. They each need to think, what if it was me stranded hopeless by a train station in Syria?

What You Can Do

There are many organizations supporting refugees. You can help by asking them what they need, whether it is money, time, goods, or political support.

Everywhere, people can make sure that their politicians know they support giving refuge to people fleeing violence. As Tahirih Danesh points out, “You and I have the power to uphold each other’s human rights.”