Syria and Beyond Feature: Refugees and Germany’s “New Tolerance” 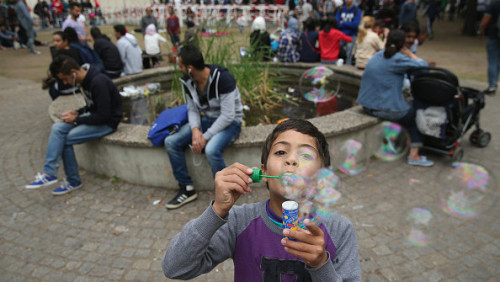 See also Syria & Beyond Feature: How to Help Refugees

Most articles about the refugee crisis facing the people of Syria and Eritrea approach it from the point of view of the comfortable and frightened class of Europeans who are worried about what it will cost them and how it will change their lives. I get that. It will change their lives. It is frightening. It will feel like their culture is slipping away from them. Yes. Change. It’s scary.

Imagine how much more frightening it is for people fleeing war, destruction, and violence. People who have seen their loved ones killed. People who have no idea what the future will bring, who pile into refrigerated trucks and lifeboats because the alternative is certain: it’s death.

Their culture is changing as well. Their lives, their homes, the weather, the language, the food. It’s changing fast and violently and unpredictably.

European history has been one of people looking for a safe place to live. During World War II, Polish refugees fled to Iran. French refugees to Morocco. Dutch to Canada.

Despite attacks against asylum seekers in Germany, an overwhelming majority of the population is pushing its government to welcome and support refugees. Is this the result of a single image, like many claim? Or is it the result of decades of work to eliminate racism and become a more tolerant nation?

We talked to political analyst Dr. Hajo Funke to find out more about the situation in Germany. Dr. Funke has spent his life studying right-wing extremist groups. He outlined a number of actions taken by German activists and politicians over the past decades.

In the course of the conversation with Dr. Funke, it became clear that Germany has done a lot of work to change the political discourse. Right-wing extremism and violence have not been eliminated from society, but its influence over the population has been drastically diminished.

Germany expects 800,000 people fleeing conflict to seek refuge within its borders this year and has stated that they can accept about 500,000 per year.

Public opinion in Germany is overwhelmingly in favor of accepting refugees. Two-thirds of the population is in favor of providing refuge to people fleeing conflict, war, and oppressive governments, and 88% said they would not oppose the opening of refugee homes in their area. This kind of support is unprecedented in Europe.

How was this support built? Dr. Funke tells us that it was built over time:

It started slow, and then it created a wave. For at least two years, 60% of people acknowledged that refugees needed more help. Last year 2/3 of Germans wanted to expand services and were willing to spend money and time to help them. This big majority remained decisive.

Funke argues that the majority support for refugees will continue as long as the political elites keep their promises and the bureaucracy works to integrate and support the refugees: “You can’t just take refugees in, you have to remain empathetic, really and symbolically.”

The role played by civil society has been critical in influencing public opinion and shoring up support for refugees. Hundreds of thousands of people are involved in working to support refugees and asylum seekers either as volunteers, members of NGOs, or government employees. There are many NGOs offering practical, professional support to people fleeing their home countries.

Germany has an integrated approach to dealing with asylum seekers and refugees involving local governments, the political elite, the administration, and NGOs.

Much of the violence directed at asylum seekers has been centered in areas where neo Nazi groups such as the National Socialist Underground are present. “They are ruthless, active, violent, agitating, also in the social networks often,“ says Dr. Funke

There are several groups in Germany that advance anti-migrant, anti-Muslim agendas. Dr. Funke gives the examples of PEGIDA (Patriotic Europeans Against the Islamisation of the Occident), PI (Politically Incorrect), Alternative for Germany, and Die Rechte:

They say, we are not against the Jews, but we are against the migrants, the Muslims. Anyone who has studied the way anti-Semitic discourse works will recognize the “yes, but…” as a form for succeeding with agitation.

For groups like PEGIDA, Islam is incompatible with German culture. The group was able to mobilize more than 20,000 supporters to march against Islam in the German city of Dresden after the attacks on the Charlie Hebdo offices in Paris in 2014.

In a 2014 speech, German Chancellor Angela Merkel accused Pegida of being racist agitators:

But what they really mean is: you are not one of us, because of your skin color or your religion….So I say to all those who go to such demonstrations: do not follow those who have called the rallies. Because all too often they have prejudice, coldness, even hatred in their hearts.

Although Pegida has not been able to replicate their success in other cities, Dr. Funke cites a rise in racist attacks: “In the three months after the rally, violence against asylum seekers increased. In the shadow of Pegida, the neo-Nazis have been reactivated, taking a newly active, violent approach.”

Succeeding Through Endurance and Dialogue

Maintaining a tolerant and peaceful society requires more than passion, it requires endurance.

Dr. Funke insists that the majority needs to remain consistent. They need to continually challenge racist discourses and give no political ground to racist agitators: “Consistency is a counter-attack to racist attacks.

When Angela Merkel stated that the multi-cultural society had failed, there was much debate about what she meant. Each country and each person seems to define multi-culturalism differently. In the case of Germany, multi-culturalism meant separate societies, with separate parties and systems for each. Dr. Funke elaborates:

There was a lot of public discourse. The government conceived of an Islam dialogue led by government officials. Germany’s strong conservative party, the CDU [Christian Democratic Union], participated They were active in saying we need a dialogue, otherwise we will have two parallel societies.

The coalition for the national dialogue was broad and included the involvement of a spectrum of political parties from the Green Party on the left to the CDU. The Crisis Group studied the situation and offered a number of recommendations for a more inclusive society.

The report, “Islam and Identity in Germany”, recognized the need for more political recognition and social inclusion. It included this recommendation directed at the CDU: “Recognize that effective integration cannot be achieved on the basis of unrealistic or unreasonable requirements for naturalisation of Germans of immigrant origin”.

In another recommendation to regional governments, the study focuses on respect for law and the political system, not conformity:

Review and where necessary revise naturalization procedures to ensure they do not unduly emphasize conformity to current public opinion in screening out potentially undesirable candidates for citizenship but rather retain as the crucial criterion a candidate’s commitment to respect the Constitution.

Public opinion needs to be matched with money and donations to show that there is a real foundation for support. Throughout Europe, there are people are eager to help and some NGOs have experienced a dramatic increase in donations and offers to volunteer.

What has Hajo Funke learned about building sustainable peace over his 50 year career?