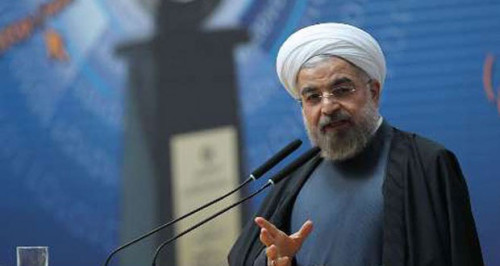 Under increasing pressure at home over the July 14 nuclear deal with the 5+1 Powers, President Rouhani made a vigorous defense of the agreement on Saturday as a political and economic necessity for Iran.

President Rouhani asserted, “I will not let some hardliners damage the hopes of the nation.”

He then declared, “The global hegemony and superpowers have put shackles on…Iran’s economy and kept it from moving, and the JCPOA [Joint Comprehensive Plan of Action] means all these shackles will be broken.”

Rouhani has long maintained that a deal was necessary for economic recovery after years of sanctions, corruption, and mismanagement. In September 2013, he persuaded the Supreme Leader to return to negotiations with the 5+1 (US, Britain, France, Germany, China, and Russia) with a thick dossier of the long-term damage if an agreement was not reached.

The President’s opponents, however, have maintained that Iran can survive sanctions with a “resistance economy” if the deal is not implemented. They are insisting on a formal vote in Parliament over the deal.

Rouhani maintained on Saturday, “Nobody in the course of history can say that this deal is not consistent with the dignity of the Iranian nation.”

A Parliamentary committee of inquiry has said it will issue its report on the JCPOA by the end of September.

Internet entrepreneur Arash Zad has reportedly been arrested and held in detention for more than a month.

IranWire says Zad was seized at Tehran’s Khomeini International Airport on August 1 as he was about to board a plane for Istanbul, where he currently lives.

Zad is the editor of the Persian-language website Weblogina, an online magazine about IT innovations. He is also the director of Zigzag Lab for “high quality web products, online services, and digital experiences.

Zigzag’s start-ups include Ladybug, which “aspires to produce a generation of women in Iran who are enthusiastic about and active in different technological fields”. In 2014, Ladybug won the UN’s Youth Award for developers and digital entrepreneurs under 30.

Zad was about to launch a project for workshops for older people to teach them how to use and secure new communication tools.

Grand Ayatollah Nasser Makarem Shirazi has chided the Saudi monarchy as inept after the death of 107 pilgrims in a construction accident in the holy city of Mecca.

“The al-Saud is not capable of administering the affairs of Grand Mosque. At a time when millions of pilgrims are present in this mosque, why should a crane be there? This action of theirs is not wise,” Makarem Shirazi said in Qom on Saturday.

He said the “imprudence” of the Saudi superintendents of the the holy site was behind Friday’s fatal collapse of a crane into Mecca’s Grand Mosque.

The cleric asserted that Muslim scholars have to teach Saudi rulers about how to manage the Grand Mosque.

The Rouhani Government has advocated engagement with Saudi Arabia, but — amid regional issues such as the Syrian civil war and Saudi military intervention in Yemen — hardliners have denounced any discussions with Riyadh.

The Supreme Leader’s office put out a Twitter message on Sunday expressing sympathy for the one Iranian killed in the accident, while failing to mention the other 106 dead:

Following up latest conditions of the injured in #Mecca crash, Leader of Revolution’s condolence was conveyed over death of Iranians.