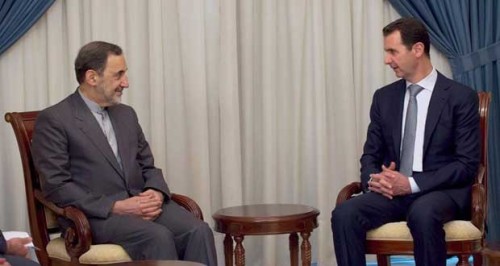 Amid defeats and economic crisis for Syria’s regime, the top aide of Iran’s Supreme Leader has paid a sudden visit to President Assad in Damascus.

Velayati saw Assad as the Syrian military suffered its latest defeat, the loss of the Mastoumeh military camp south of Idlib, in a series of losses in the northwest and south.

The regime has also appealed for months for further Iranian economic aid, which has been essential to Assad’s survival. In July 2013, Iran extended a $3.6 billion line of credit, but it has been reluctant to meet Syrian requests — initially reported to be for $6 billion, then $4 billion — for a renewal. Tehran is said to be offering no more than $1 billion.

On Monday, Assad hosted Iranian envoy Rustam Qassemi, a former Oil Minister who now heads the Committee for Development of Iranian-Syrian Economic Relations. Headlining the meeting, the regime’s al-Watan newspaper said only $300 million is left from the $3.6 billion extended by Tehran in July 2013.

Syrian State news agency SANA gives no detail of any discussion with Velayati of the military or economic situation, merely giving Assad’s declaration that “the Axis of Resistance has been firmly established on the international level and can no longer be ignored by any party. He “hailed Iran’s support to the Syrian people, saying it has been a fundamental element in the battle against terrorism”.

Velayati reportedly praised “the Syrians’ steadfastness [which]…has even made this Axis stronger and firmer, citing the recent ‘major victory’ against the terrorists” in Hezbollah’s offensive in the Qalamoun region near the Lebanese border.

According to SANA, the Supreme Leader’s aide “promised continued Iranian support for Syria with everything necessary to boost the Syrian people’s resistance in defending their homeland and confronting terrorism and its sponsors”.