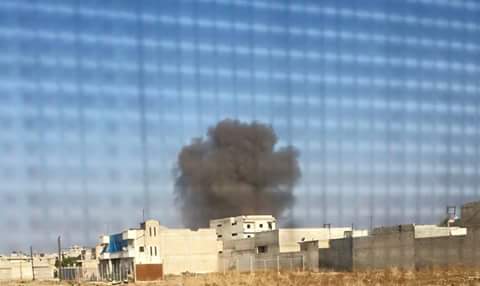 PHOTO: Smoke rises from a US airstrike near Azaz in northwest Syria on Friday

The Struggle for Hospitals in the “Liberated” Northwest

The US war with the Islamist faction Jabhat al-Nusra escalated inside Syria on Friday, with the Americans bombing the group and al-Nusra attacking the rebel division hosting US-trained rebels.

The US air force bombed al-Nusra positions near Azaz, in northern Aleppo Province close to the Turkish border, on Friday morning. Activists said 12 people were killed.

The American airstrike came as al-Nusra attacked the headquarters of the 30th Division of the Free Syrian Army, which hosts the 54 rebels trained by the US in a $500 million program to fight the Islamic State. The Division said five members were killed, 18 wounded, and 20 captured.

On Wednesday, al-Nusra abducted 18 fighters from the 30th Division near Azaz, only days after the US-trained fighters moved into Syria from Turkey. US officials, who initially denied the kidnappings, later said that none of those abducted were among the 54 trainees; however, the commander of the unit and his deputy were among those seized.

In a statement on Friday, al-Nusra said it had planned to ambush the 30th Division. A Dutch al-Nusra fighter wrote that “the filthy US-backed group” was working with a “US command center” to call in airstrikes.

Al-Nusra’s statement said that the US had never intended to topple the Assad regime, accusing the Americans of false slogans in their claims to support the Syrian people.

The Islamist group criticized the US failure to establish safe havens in northern Syria, and Washington’s listing of al-Nusra as a terrorist organization “while ignoring the regime’s crimes”. Discussing the entry of the 54 US-trained rebels into Syria, al-Nusra noted US aerial attacks with “more than a dozen rockets which left a number of dead and wounded in our ranks”.

The US has bombed Jabhat al-Nusra since the first day of its intervention, publicly targeting the Islamic State, last September. Scores of fighters and civilians have been killed in the attacks on positions in Aleppo and Idlib Provinces.

The commander of the US-trained rebels, Colonel Nadim Hassan, said two days earlier that the Americans had not given his force assurances of protection, despite entry into areas where Jabhat al-Nusra operated and the possibility of retaliation for the American airstrikes.

US officials, who initially denied reports of the kidnapping, said on Friday that “they expected the Nusra Front to welcome Division 30 as an ally in its fight against the Islamic State”.

One “former senior American official”, who worked on Syria until recently, said, “This wasn’t supposed to happen like this.”

A “senior Defense Department official” admitted that the US had misjudged the threat and said officials were trying to understand why al-Nusra had attacked the rebels. He claimed the “silver linings” of effectively fighting by the trainees and quick intervention by US warplanes.

However, witnesses and rebel leaders said most opposition units did not help the 30th Division. An exception was Jaysh Al-Thuwar, a coalition of Arab and Kurdish factions, which came under attack when Division fighters fell back to areas under its control.

The US war with Jabhat al-Nusra has quickly overtaken the question of safe zones along the Turkish border in Aleppo Province. Only last week, Turkish officials were pointing to American acceptance of the proposal, although US counterparts in Washington later denied that their agreement was only to clear the Islamic State from the area, and not to safe havens or no-fly zones.

Video: Rebels Fighting Off Regime Attack on Jobar in Damascus

Rebels fend off a regime attack on Jobar in northeast Damascus:

The opposition holds about 80% of Jobar, which it took over in February 2013. The regime has made repeated attempts, supported by aerial bombardment, to move farther into the district.

Video of the Turkish bakery in Reyhanli, destroyed by fire on Friday, which served 170,000 Syrian refugees: