Syria Feature: The Struggle for Hospitals in the “Liberated” Northwest 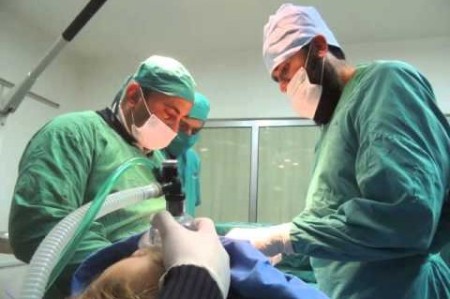 PHOTO: Doctors operate at a hospital in Kafranbel

Jumana, 30, is one of the lucky ones. She was heavily pregnant when her house was bombed and she was injured on April 20 this year.

Within half an hour of arriving at the Dar al-Hikma hospital covered in a blood-soaked sheet, she was loaded into an ambulance and driven to Turkey for further treatment.

Basseal al-Asfar, the doctor who examined her, said she needed CAT scans because of a piece of shrapnel lodged in her head.

“The only CAT scanner in Kafranbel hasn’t been working for more than a year. That’s why I asked for Jumana to be transferred immediately,” he said.

Although hospital workers warn that most patients transferred in this way die on the road, Jumana not only survived the journey but is now doing well, according to her sister, who visited her in Turkey.

Ahmed al-Aqraa, the director of Dar al-Hikma hospital, said that his staff treated a wide variety of war wounds, but with such complex injuries, they had no choice. “Untreatable cases are taken to Turkey,” he said.

There are around ten hospitals and clinics in the Kafranbel area, equipped to a varying degree. Some offer free treatment, while others are private and care must be paid for. Although some hospitals are fitted out with devices for ultrasound and X-ray imaging, dialysis and respiration, others struggle to provide basic services.

At Maarat al-Nu;man’s Orient hospital, Dr Adnan says that “most medicines are available for free. They are donated by humanitarian organisations like Hand in Hand.”

Hand in Hand is funded by European countries and the opposition Syrian National Coalition.

Around 18 doctors and 30 nurses from the Kafranbel area work at the hospital.

Even at better-equipped hospitals like the Orient, however, some patients are deterred from seeking treatment by the threat of aerial bombardment.

Suad, 40, needs to have her bile ducts removed but is too scared to go to the Orient for treatment. She cannot afford to pay for surgery elsewhere, but she notes that the Orient has repeatedly been targeted by airstrikes.

Around 18 physicians and 30 nurses from the Kafranbel area work at the hospital, providing the best services they can.

Hospital nurse Suha points out that the Orient has not suffered a direct hit.

“Most bombs fall in the surrounding area causing only structural damage,” Suha said, “except for one occasion, when Dr Mahmud al-Zarab was killed – he was just outside the hospital premises.”

Other patients have different criteria for choosing where to be treated. Amena, 25, said the private maternity hospital in Kfar Nabel, the only one in the area, was often very crowded with patients from neighboring villages. Instead, she chose to deliver her baby boy at Al-Khatib hospital about a month ago. She says that she received good treatment, and that nurses kept her and her baby clean and warm.

Mohammad, the manager of Al-Khatib, said his hospital was able to offer a wide range of medical procedures, including appendectomy, caesarean birth and catheterisation.

In March, Mohammad also set up an oxygen production unit at the hospital to treat chlorine gas poisoning. There are widespread claims of a chemical attack in the area, although this remains unconfirmed.

“The regime bombed the area with chlorine gas,” he said.

At the Orient hospital, the most common injuries are fractures sustained during bombings.

Yasser, 22, from the nearby village of Rami, was seriously injured in the hand as a result of artillery shelling. He was taken to the Orient, where his hand was amputated.

“Most of the injuries we receive are bone fractures from bombing,” he explained. “To treat such cases, we resort to splinting, unless the nerves have been severed. In that case, as happened with Yasser, we would need to amputate the arm. We then follow up on the patient until he heals.”

Saud added that both private and public hospitals in Marat al-Numan had been forced to accommodate extra patients after a hospital in the neighboring town of Saraqeb was hit by barrel bombs in April.

He warned that medical services in Maarat al-Nu’man might suffer further if health care funding shifted to the liberated city of Idlib, although he and his colleagues would work for free until they found another source of financial support.