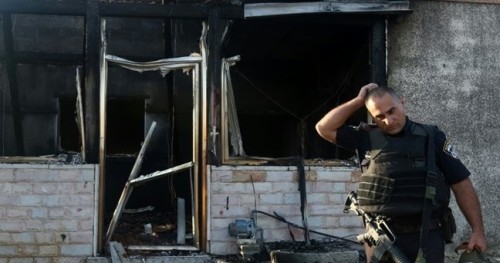 PHOTO: A security officer stands in front of the Palestinian home burned, reportedly by Israeli settlers, on Friday

An 18-month-old Palestinian toddler was killed and three of his family seriously injured on Friday in an arson attack in the West Bank.

The Palestinian Liberation Organization held the Israeli Government “fully responsible” for the death, suspecting settlers of the attack:

This is a direct consequence of decades of impunity given by the Israeli government to settler terrorism.

We cannot separate the barbaric attack that took place in Duma last night from the recent settlement approvals by the Israeli government, a government which represents an Israeli national coalition for settlements and Apartheid.

The Israeli military called the attack “Jewish terror”, and Prime Minister Benjamin Netanyahu and other Israeli officials condemned the violence.

This attack against Palestinian civilians is a barbaric act of terrorism. #IDF has heightened efforts to locate terroists responsible #Duma

A resident said Israeli settlers smashed the windows of two homes in the Palestinian village of Duma, near Nablus, before throwing flammable liquids and Molotov cocktails inside.

Ali Saad Dawabsha was trapped and soon died from serious burns, according to a local official. His mother and father and 4-year-old brother were seriously injured.

Israelis from nearby settlements also attacked and partially burned another home — empty at the time — spraying graffiti in Hebrew at both sites.

The Israeli military said two masked men were responsible for the attacks, while a resident said four attackers fled toward the settlement of Ma’aleh Ephraim.

The PLO statement said the attacks were the latest in more than 11,000 settler assaults on Palestinian homes, cars, churches, mosques, and trees since 2004.

Violence has spiked in East Jerusalem and the West Bank in the last two week, with clashes between Israeli security forces and demonstrators that have killed three Palestinians.