Syria Daily, August 22: UN Calls For Halt to Fighting Between Israel and Assad 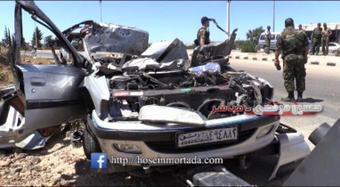 Scores Dead in New Regime Airstrikes on Damascus Suburb of Douma
“Abandoned, We Are Nothing But Numbers and Lists”

UN Secretary General Ban Ki-Moon has called for a halt to fighting between Israel and the Assad regime, after three waves of Israeli attacks inside Syria.

In the latest strikes, Israeli jets reportedly hit Syrian Army and militia positions near the towns of Al-Kawm, Al-Ba’ath, Jibba, Khan Arnabi, and Hader in southwestern Syria on Friday night.

A pro-Assad outlet, citing a militia source, said five people were killed and 12 wounded. It did not identify the casualties as military or civilian.

The Secretary-General is deeply concerned over the serious violations of the Disengagement of Forces Agreement between Israel and Syria.

The Secretary-General condemns all violations of the Disengagement of Forces Agreement and calls on all concerned to refrain from any action that jeopardizes the ceasefire between Israel and Syria and undermines the stability of the area. The Secretary-General calls on all involved to exercise maximum restraint to prevent any further escalation in an already tense regional environment.

Israeli Ambassador Ron Prosor responded on Saturday that the UN Nations should condemn Thursday’s rocket fire from southwestern Syria into Israel, rather than putting out a general statement regarding both sides: “Israel holds Syria responsible for every attack that emanates from its territory, and knows that Iran is the ultimate producer of all terror incidents in the region.”

Four rockets landed in Galilee and the Israeli-controlled Golan Heights. Israeli forces responded later Thursday with artillery fire and airstrikes from Quneitra Province near the border to the West Ghouta area of Damascus Province. Targets included the 68th and 90th Brigades, the 37th Regiment, a military security branch, artillery batteries, communications antennae, and other outposts and infrastructure.

Syrian State media said one soldier was killed and seven wounded in the attacks.

On Friday, an Israeli warplane hit a car carrying five men in Quneitra, killing all of them. Unconfirmed reports said the men were fighters in Assad’s militia, the National Defense Forces, while Syrian State media claimed they were civilians.

The attacks are the most widespread Israeli intervention in the 4 1/2-year conflict. West Jerusalem has previously carried out occassional strikes on military facilities, ports, and convoys with missiles reportedly bound for Assad’s ally Hezbollah. In January in Quneitra, they struck a convoy with Hezbollah and Iranian commanders and fighters, claiming that they were planning to set up rocket launching positions near the Golan Heights.

The Syrian air force is continuing its assault on the Damascus suburb of Douma, almost a week after bombardment killed at least 112 people and wounded more than 550.

Rebels fighting for control of Tal Zataar near Daraa city:

Rebels launched offensives in June and late July trying to take regime-held parts of Daraa city, where the uprising against the Assad regime began in March 2011. Tal Zataar has changed hands several times during the fighting.

Claims are circulating that the Islamic State has used chemical weapons on rebels along a frontline near the town of Mare’ in northern Aleppo Province.

Medical staff said on Friday that they treated victims with breathing difficulties, coughing redness of the eyes and face, and itching skin.

The Islamic State allegedly used mustard gas earlier this month in fighting with Kurdish forces in northern Iraq. Old stocks of the gas were left in Iraq after the 2003 war; alternatively, the militants could have captured chemical material from the Syrian regime’s stockpiles.

Rebels and the Islamic State have been battling for months in the area. Rebel factions sent reinforcements earlier this month after the militants took villages close to Mare’.

A funeral march in Aleppo on Friday for a rebel killed in fighting with the Islamic State: