Syria Feature: “Abandoned, We Are Nothing But Numbers and Lists” 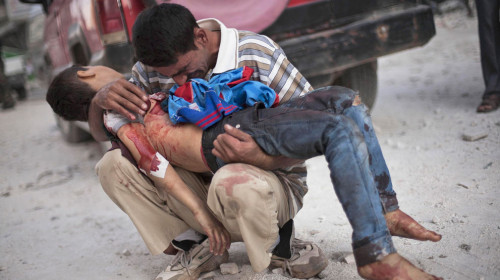 An article by Lina Sergie Attar — Syrian-American architect, writer, and President of the Karam Foundation — in Politico:

One cold day in March, a history teacher stood in front of his young schoolboys in a classroom in Eastern Ghouta, outside Damascus, holding a camera in his hands. It was a typically drab room with gray walls, just like the ones in Aleppo where I spent my adolescence, only this classroom was much less crowded than mine ever were. These children were the lucky ones—still able to attend school in the midst of a violent war. A world away, at my home in a quiet suburb north of Chicago, I watched on YouTube what the teacher had recorded, the same way we Syrians have watched our country unravel for more than four years now — on screens.

The teacher tells the students, “What is happening to us right now is history, a history that will be recorded. History is being documented by video cameras. History used to be written on paper. Right? Let us document our history right now. In the future, if God grants us the destiny to live, you will grow up and tell your children’s children: This used to happen to us, we used to be in school, etcetera.”

A child wearing earmuffs in the front row raises his hands to his head. He stands up before we hear what he hears—a piercing sound that ends with a boom. The other boys fall to the ground and hide under their desks. All but one of them. I wonder about him. Has he lost his hearing during the war? Or simply his fear of death? The teacher runs to the courtyard. The frame jerks around with every panicked stride. The history lesson he had been taping is forgotten among the shouts and confusion. Beyond the school walls, a massive cloud of dust rises into a clear blue sky.

A different, unintended history lesson was recorded in that YouTube video, joining the thousands of others that continually document a country being ripped apart. This is everyday life in Syria. This is the very kind of harrowing experience the teacher wants his students to record and pass on to future generations—so that they never forget.

Yet, in a way, I found the teacher’s words more troubling than the bomb: “This used to happen to us, we used to be in school, etcetera.” He can barely articulate what it is the children are enduring, and stops before he even begins: etcetera. Syrians collectively carry a modern history of not naming what should have been named, clearly and without confusion, many decades ago: torture, corruption, executions, disappearances, rape, injustice. A history of concealment and fear, held in place by a dictatorship.

Our recent history tells us that the revolutions of the Arab Spring broke the walls of fear and silence, especially in Syria, where people began speaking, writing and chanting about the injustices they endured as they demanded freedom and dignity. Then, the years past, the losses mounted and the world grew more and more indifferent; it was three full years ago that President Obama pledged to intervene if the Syrian government crossed the “red line” of using chemical weapons, a promise he has broken. Some Syrians began to recede into silence, out of not only fear, and later, exhaustion, but collective trauma. In many ways, the realities Syrians faced had become simply inexpressible.

Now, the everyday violence and death Syrians witness is no longer recorded in full force unless events surpass the daily “acceptable” quota of death—like it did on August 16 in Douma, after more than 100 people were killed by a regime aerial attack on a crowded marketplace. These kinds of mass tragedies, like the chemical weapons attack in 2013 and the Daraya massacre in 2012, capture the world’s attention—headlines, outrage, condemnation—for a few moments before Syria’s suffering once again fades to white noise. When the country has been reduced to smoldering ashes and its people have been forced into a mass exodus to new countries and new homes, our capacity to document—to speak or write and chant—dwindles. History collapses into a simple etcetera.

In The Infinity of Lists, Umberto Eco explores humanity’s historical tendency to catalogue life. From iconic examples in art and literature to everyday menus and mathematical calculations, Eco argues that we make lists in a feeble and unsuccessful attempt to create order out of chaos, to take stock of the knowable in the face of the unknown. We compulsively list as we strive for immortality while facing the stark reality of death. A list, like time, can go on into infinity, far beyond the list-maker’s limited perspective.

Since the revolution began in 2011, Syrians have been living Syria as a list, a catalogue that oscillates between triumph and terror: lists of villages, towns and cities that joined the uprising for freedom and dignity Friday after Friday; lists of the revolution’s chants and songs; lists of the defected soldiers and officers; lists of liberated territories gained and lost in continuous waves. Lists, also, of the dead, of the missing, of the refugees; lists of the drowned, of massacres, of ancient sites and antiquities that have been destroyed. Shifting maps of alliances and territories held by changing militant groups with names new and old. Lists of the moderates and the extremists, of the good guys, the bad and eventually the Islamic State—the really bad.

Slowly, our lists grew as Syria transformed from a simple narrative of another Arab Spring uprising to a civil war to an international crisis that was just “too complicated.” We have become nothing but numbers. Every story in the media is marked with counts, ever growing, of the dead and detained, of the refugees and displaced, of the series of failed international talks that are like a Hollywood blockbuster growing worse with each sequel, as world powers keep “trying” to find a political solution to the crisis, as they stoke the raging fire in the name of geopolitical interests while public attention wanes.

The Institute for Economics and Peace recently named Syria the “most dangerous country in the world.” Still in denial, I clicked on a story about the ranking, and there we were, No. 1. In 2008, as I discovered, we had been No. 88 out of 162 countries. Even in our so-called “peaceful” days, before the “reckless revolutions and bloody uprisings,” when people silently lived under Bashar Al-Assad’s iron rule, when we couldn’t breathe yet were stable, Syria was already halfway from the bottom of the list, hovering precariously between dangerous and peaceful.

As the world assigns us a lowly rank on a list, Syrians, too, are cataloguing the war, capturing every detail of their lives on cameras and social media. They record their journeys across seas and oceans to seek better lives. They walk across continents, documenting their exodus through photographs of blistered feet shared with family on WhatsApp — evidence that they are still alive. Indexing our experiences has become an attempt to grasp loss, to document our own existence as it slips away with every entry. The more we list, the more we lose — yet we cannot stop. We add to this catalogue of loss with the insane expectation of an end, but the end stretches out into an unknown time, far from our understanding.

At the beginning of the revolution, documentation existed in the present tense, serving to expose what was happening in real time, and breaking Syria’s history of oppression by finally speaking and showing truth. But now, the urgency to be noble and fearless witnesses has faded. There is no humane “world” that exists to plea to for help. Syrians once believed that uploading hundreds of videos of barrel bombs dropping from regime helicopters on civilian areas would be enough to declare a “no-fly zone” — because what world would watch a government indiscriminately bomb its people and stay silent? People believed that documenting repeated chemical weapons attacks would eventually end them. Instead, Obama’s “red line” became a green light for the Assad regime to continue using chemical weapons, including chlorine-laden bombs, even after a United Nations Security Council resolution to ban them. People believed that more than 55,000 smuggled images of tortured, skeleton-like corpses in Assad’s prisons would create an international outrage that would finally send Assad and his regime where they belonged—a trial at The Hague. Instead, Syrians were left alone to battle Assad, Al-Qaida and ISIS.