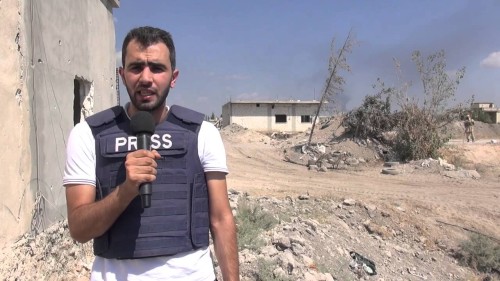 Rebels completed their recapture of towns across the northern al-Ghab Plain in Hama Province on Wednesday, renewing pressure on President Assad’s forces in western Syria.

Latakia, located on the Mediterranean, is considered an essential area of support for President Assad’s stay in power.

English-subtitled video from the Sham Legion summarizing the advances:

The rebels moved into the al-Ghab Plain in late April, following their takeover of neighboring Idlib Province in northwest Syria. Earlier this month, they captured the northern plain amid a rapid withdrawal by Syrian forces. However, President Assad’s troops regrouped and hit back last week.

The ebb and flow of the #Ghab plain battle in #Hama and #Idlib #Syria. Via @HasanMustafaS. pic.twitter.com/H1zZtRYGeG

The renewed rebel advance came as President Assad, trying to rally his supporters, was effectively admitted that the regime is now reliant on Iran, Hezbollah, and Russia for the military resources for its survival. He told Al-Manar TV, the outlet of Hezbollah:

There is no doubt that times of war lead to more army desertion cases….

Retreating and advances occurred in the same areas in less than a month, which is natural in wars, and I focused on that point in my speech to motivate youths to join the armed forces….

I have great trust in the Russians, and they proved throughout this crisis since four years ago that they are honest and transparent with us in relations and that they are principled….

Iran now has more prospects to play a bigger role…and Iran’s strength will strengthen Syria, and in the same way Syria’s victory will be a victory for Iran.

Assisted by airstrikes, the Syrian military did hold its lines in other areas threatened on Monday. An attack on Bashkoy, north of Aleppo city, was repelled after rebels briefly entered the village. About 300 troops continue to hold the isolated, disused Abu Duhur airbase in Idlib Province, although both sides have reportedly taken heavy losses.

A regime bomb almost hits a cameraman on the frontline in Aleppo Province:

Saudi Arabia Repeats: No Place for Assad in Syria’s Future

Saudi Arabia has repeated that President Assad must leave power in any political resolution of Syria’s 4 1/2-year conflict.

Speaking at a conference in London, Foreign Adel al-Jubeir said:

The Saudi position is clear….Bashar al-Assad has lost legitimacy and must leave. There is no future for Bashar al-Assad and for those whose hands were stained with blood. This is an issue that won’t be compromised.

The question is: would Bashar al-Assad leave through a political process, or through a military defeat?

Two weeks ago, al-Jubeir effectively halted a political initiative by Assad’s allies Russia and Iran when he said — in Moscow after a meeting with Russian Foreign Minister Sergei Lavrov — that Assad’s departure was a precondition for negotiations.

The Islamic State has closed on the frontline town of Mare’ in its offensive against rebels in northern Aleppo Province.

The militants took Herbel and four other villages near Mare’. A rebel counter-attack pushed the Islamic State away from the town, inflicting scores of casualties, but the opposition is still on the defensive.

Aftermath of Islamic State attacks, including a vehicle bomb, on Mare’: 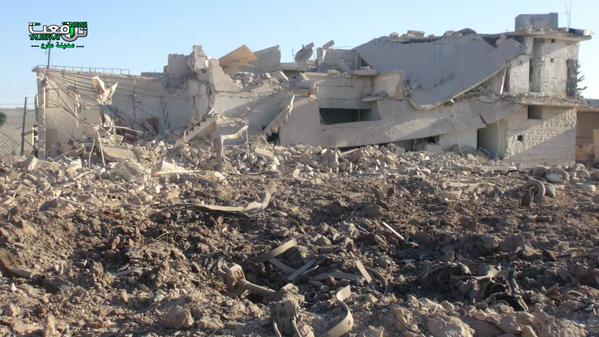 Fighting at the edge of the town:

Claims are circulating that the US-led coalition has bombed the Islamic State near the captured villages.

Mare’ is north of Aleppo city, about 20 km (13 miles) from the Turkish border.

Medics Protest in Besieged Yarmouk Camp Over Lack of Aid

Medical personnel in besieged Yarmouk in south Damascus protested on Tuesday over the lack of aid to more than 15,000 people who remain in the camp.

The medics called on the international community to act, citing diseases such as typhoid. 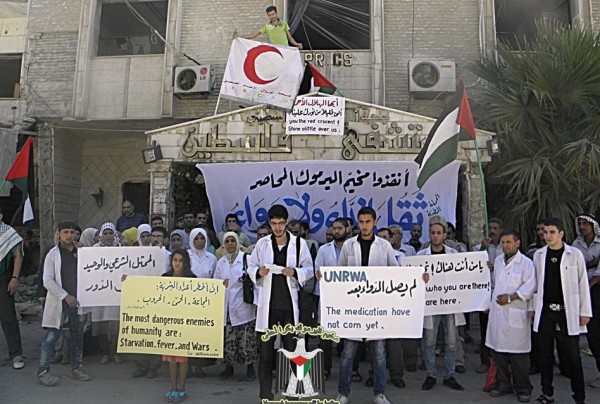 Yarmouk, an area of about two square kilometers housing Palestinian refugees, has been surrounded by the Syrian military since rebels moved into the camp in summer 2012. Scores of civilians have died from starvation and lack of medicine.

“The medical situation is very bad because there is no support whatsoever from any medical body,” a citizen journalist said on Wednesday. “Most of the medicines prescribed to the sick have been expired for a year and a half.”

The problems have been compounded by the entry of the Islamic State into part of the camp this spring, leading to the suspension of operations by groups such as the United Nations Relief and Work Agency.

UNRWA spokesman Chris Gunness said in a statement last week that the “priority remains the delivery of humanitarian aid to civilians within Yarmouk” and that agency is working to “establish secure conditions” under which aid can be delivered.

UN Secretary-General Ban Ki-moon said on Tuesday, in his monthly report to the Security Council, that the UN and its partners could not deliver food to 422,000 people in besieged areas in July.

Ban said assistance was delivered to only 29 of 127 hard-to-reach locations last month.

He said 228,000 people are besieged by Islamic State militants in regime-controlled neighborhoods of Deir ez-Zor city in northeast Syria; 167,500 by regime forces in East Ghouta and Darayya, near Damascus; and 26,500 by rebel groups in the regime enclaves of Nubl and Zahra in Aleppo Province.

He criticized the “complete and utter absence of protection for civilians” and “total disregard for human life” in Syria, which remains “the largest humanitarian and peace and security crisis facing the world today.”

Ban said the delivery of humanitarian aid to many of the 12.2 million people in need remained “extremely challenging” in July because of conflict, insecurity, shifting front line “and deliberate obstructions and interference by the parties, including restrictions on movements and burdensome administrative procedures.”

The secretary-general urged all parties to allow aid deliveries but said this can’t substitute for political action to end the conflict, now in its fifth year with over 250,000 people killed.