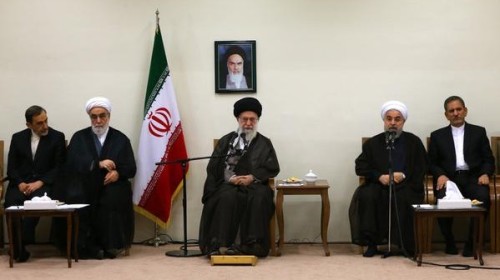 PHOTO: Iran’s Supreme Leader with President Rouhani and the Cabinet on Tuesday

Responding to a political offensive by Hassan Rouhani, Iran’s Supreme Leader lectured the President on Tuesday, telling the Government to “be vigilant not to play into the hands of the enemy under any circumstances”.

Ayatollah Khamenei used a photo opportunity with Rouhani and his Cabinet to make the remarks. On the surface, they were a restatement of the Supreme Leader’s line that the US and Israel continue to threaten Iran after the July 14 nuclear deal. However, he pointedly added a note to the Government:

Since Revolution, Zionists and Americans’ enmity toward the Islamic Revolution has not declined and our officials must not forget this fact.

In the past week, Rouhani has stepped up his campaign against opponents within the regime. Preparing for key elections in February 2016, he has said that the Guardian Council should not be allowed to vet candidates. He has pressed his foreign policy of “engagement”, despite the opposition of the Revolutionary Guards, with the highlight of the visit of the British Foreign Secretary. And he has emphasized that it is his Government which can bring economy recovery to an Iran crippled by years of sanctions, mismanagement, and corruption.

The President’s allies have also been on the offensive. Former President Hashemi Rafsanjani has met Grand Ayatollahs to discuss political and financial support. Leading MP Ali Motahari told the head of the Revolutionary Guards, General Mohammad Ali Jafari, that the late Ayatollah Khomeini had insisted on the military staying out of politics.

Without referring directly to the issues, Khamenei used the US and Israel to push back the President: “Since the beginning of the Revolution to this day, the enmity of the Zionists and the Americans has not waned; and this reality should never slip the minds of authorities.”

The Supreme Leader acknowledged that the conclusion of the nuclear negotiations had been “one of the very important tasks” accomplished by the Government, but he added that this should not overshadow the threat: “We neglect, and we suddenly find the enemy having infiltrated in certain areas and being engaged in dangerous cultural, economic, and political activities; therefore, we must be completely careful.”

Significantly, Khamenei knocked down Rouhani’s attempt to gain advantage through the Government’s management of the economy. The Supreme Leader said instead that social and cultural issues — where hardliners have contained the President through criticism and threatened impeachment of his Ministers — were paramount:

Economic woes won’t cause anxiety, but cultural problems agitate one to lose sleep over them.

All countries pay attention to cultural products; so, if some products contradict principles and basics, they must be banned with no shame.

Lowering inflation and bringing relative stability to the economy and controlling the volatility of the market were among the government’s successful efforts which should go on….But the double-digit inflation is not still satisfactory and it has to be cut below 10%.