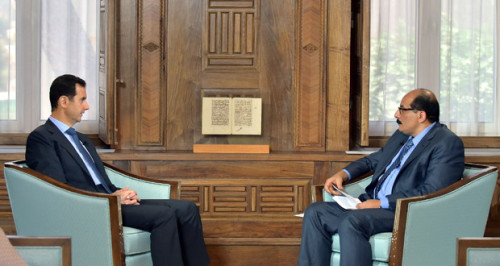 Under growing military pressure from rebel advances, President Assad put the blame on Israel in an interview broadcast on Tuesday.

Speaking with Hezbollah’s Al-Manar TV, Assad also acknowledged that efforts for high-level political talks — pursued by his allies Russia and Iran since late June — had collapsed:

So far, there is no suitable environment or essential elements for the political track to succeed in reaching a solution for the crisis. The states that support terrorism are imposing figures in any dialogue that represent these states and not the Syrian state.

Assad referred to a recent trip to Oman by Foreign Minister Walid al-Moallem “in the context of resolving the crisis”, but said that “the elements or environment necessary to have this dialogue reach final results have not coalesced yet.”

The President appeared to be referring to Saudi Arabia, which publicly checked the Russian-Iranian initiative earlier this month when it insisted on Assad’s removal as a precondition for negotiations.

Video of Assad’s interview (in Arabic)

Trying to rally support, Assad portrayed Israel as the leading force in a foreign conspiracy to topple him:

Today, the main Israeli tool that is more important than that aggression are the terrorists in Syria, meaning that what they do is much more dangerous than what Israel does from time to time to support them. They are the basis of the problem.

So, if we want to confront Israel, first we have to face its tools within Syria. You cannot confront an external enemy when you have an internal enemy. This matter must be resolved within Syria, and then things will be back to the way they were, and no-one would dare act against Syria; not Israel nor anyone else.

Yet Assad could not maintain this line to avoid any reference to recent defeats. He was asked by al-Manar to explain his public comments in late July that pointed not only to the rebel advances but to the regime’s problems with finding men to fight.

See Syria Analysis: The Speech of A Desperate President

Defending the remarks, Assad only repeated his concern about the military difficulties:

There is no doubt that times of war lead to more army desertion cases….

Retreating and advances occurred in the same areas in less than a month, which is natural in wars, and I focused on that point in my speech to motivate youths to join the armed forces.

He insisted that he still had the full support of Moscow — “I have great trust in the Russians, and they proved throughout this crisis since four years ago that they are honest and transparent with us in relations and that they are principled” — and Tehran:

Iran now has more prospects to play a bigger role…and Iran’s strength will strengthen Syria, and in the same way Syria’s victory will be a victory for Iran.

He also explained why Hezbollah’s military support of his regime was different from the “foreign fighters” serving Israel and other enemies:

Hezbollah entered Syria through agreement with the Syrian state which is the legitimate, elected representative of the Syrian people and is supported by their majority, so the state has the right to invite forces to defend the Syrian people.

The other forces are terrorists who came to murder Syrians and against the will of the people and the state.