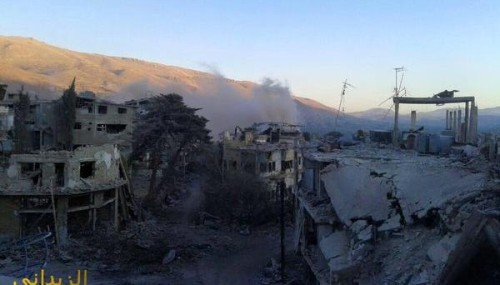 A 48-hour ceasefire began on Thursday morning in both rebel-held Zabadani in Damascus Province and the regime’s enclaves of al-Fu’ah and Kafraya in Idlib Province in northwest Syria.

The stoppage was agreed after renewed negotiations between the rebels and the regime, reportedly brokered by Iran and Turkey.

There was a 72-hour ceasefire two weeks ago. However, the faction Ahrar al-Sham, chosen to represent the rebels, withdrew from subsequent talks with claims that Iran was pursuing “sectarian cleansing” of Zabadani through the talks.

Zabadani, 31 km (19 miles) northwest of Damascus, has been attacked for more than 50 days by a Hezbollah-regime force. Rebels have threatened in response to overrun al-Fu’ah and Kafraya, surrounded for months as the opposition captured almost all of Idlib Province.

Today’s agreement reportedly arranges for the evacuation of 340 wounded from Zabadani in return for the transport of the same number of elderly and wounded from the two enclaves to Latakia Province on the Mediterranean.

Fu’ah and Kafraya this morning, at the start of the ceasefire: