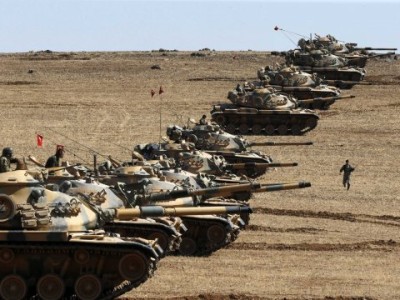 PHOTO: Turkish tanks on the border with northern Syria

I spoke with Monocle 24’s The Daily on Wednesday night about Turkey’s strategy in Syria and Iraq, as the US uses Turkish bases for the first time in strikes against the Islamic State and as Ankara attacks the Kurdish insurgency PKK in Iraqi Kurdistan.

Monocle 24’s correspondent opens by explaining the Government’s approach to curb both the Islamic State and the PKK. I then added the dimension — to the surprise of the presenters — that Turkey is also trying to contain and undermine the Assad regime through the “safe zones” that it wants to establish in northern Syria.

The presenters rightly pulled me back on my description of the strategy as a “win-win” for Turkey. If the political and military operations offer possibilities in the region, they also pose a challenge for President Erdoğan and the ruling AKP at home — particularly if there are complications in either the aerial attacks or the establishment of the safe zones.