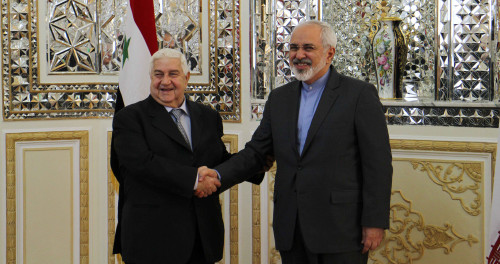 Iran has launched a new offensive in the Syrian crisis, complementing its economic and military support of the Assad regime with the prospect of political discussions — and sharp criticism of the US and allies.

The public display has been of unity over “counter-terrorism efforts and the latest developments in the region” and support for a “political situation” which will keep the regime in power.

Beyond that, no details have been offered about the content of those political discussions, including whether — behind the scenes — Iran and Russia would accept, or even encourage, President Assad to step down to maintain the Syrian system. Nor did the participants respond to rumors that Russia is trying to broker discussions between the Assad regime and Saudi Arabia, with US Secretary of State John Kerry meeting Russian Foreign Minister Sergei Lavrov and Saudi representatives in Qatar last weekend.

However, Iran offered another signal with the announcement that it will soon present the UN with a “peace plan”.

Deputy Foreign Minister said on Wednesday, “This plan will be presented to the UN Secretary General after detailed discussions between Tehran and Damascus are completed.”

He said the plan will be based on a four-point initiative, presented to the UN last year by Foreign Minister Mohammad Javad Zarif: 1) immediate cease-fire; 2) formation of a national unity government: 3) constitutional protection for minorities; and 4) supervised elections.

On Thursday, Zarif tried to put diplomatic pressure on the US by blaming Washington and its Middle Eastern allies for extremism” and terrorism.

The Foreign Minister, commenting on the Ministry’s website, said “tactless policies” by the US and the allies, especially Israel, “have brought nothing but war, destruction and extremism for the Middle East and around the world”.

On Wednesday, President Obama — while promoting the nuclear deal with Iran — said the agreement did not absolve Tehran of its support for terrorism.