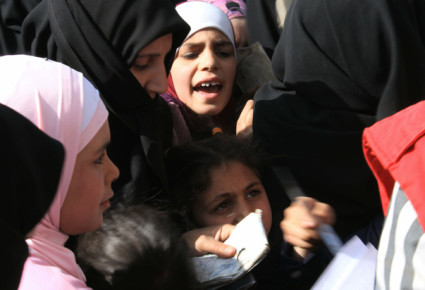 PHOTO: Lining up for food in Douma, northeast of Damascus, March 2014

Roy Gutman and Mousab al-Hamadee write for McClatchy News about life in East Ghouta near Damascus, where rebel-held areas have endured up to three years of a “surrender-or-starve” siege by the Syrian military:

Early last month, after dialysis supplies had run out in Douma, a rebel-held town just outside Damascus, a small humanitarian aid convoy arrived with a new aid shipment for the patients with severe kidney disease.

It was a minor triumph for the Syrian Arab Red Crescent, which crossed the front line into the rebel-controlled eastern Ghouta region with six employees in three trucks and two passenger cars. They’d brought a modest supply of filters, bicarbonate and catheters for the 23 patients, as well as baby’s milk, insulin doses and vaccines.

The incident on May 6 occurred in a place that’s off everyone’s map of Syria, because it’s been under siege for three years. With a population that cannot leave and can barely sustain itself, the story has gone almost untold in the international media. The region is inaccessible to reporters, and major governments have remained largely silent about the siege, as has the Syrian political opposition.

The Syrian American Medical Society, a respected nongovernmental organization that supports health care in cutoff areas, estimates there are 640,000 people under government siege, though local doctors say the number exceeds 1 million –– 550,000 in eastern Ghouta and 500,000 in northern Homs province alone. (The U.N. estimates 212,000 but won’t say how it reaches the estimate.)

They lack electricity, water, communications and access to the outside world, and they face daily bombardment.

“Today is like every day,” the director of the hospital in Erbeen in eastern Ghouta told McClatchy in a recent Skype interview. “We woke up, and the aircraft start bombing. Today they attacked a traditional market in the center of Erbeen.”

The medical director said he had just amputated the leg of a man who later died of his wounds – one of seven dead. Shelling later in the day killed two women and a child, said the doctor, who asked for his own safety to be identified only as Hamzeh.

No one knows why the government targeted civilians. “There is no rule for this,” he said, adding that it appears to be connected to the situation on the front lines. If government suffers a setback against the rebels, “it always tries for revenge.”

Hamzeh said his own hospital, a multistory building outside Erbeen, a town of 45,000, has been attacked 10 times by government warplanes and artillery, killing two nurses. All 45 beds, 15 of them for emergency cases, are underground….

The survival of the people in besieged areas is a story of adaptation to adversity, of stretching food and medical supplies to the absolute maximum, and of going without.

In winter, the residents live on bread made from barley that would usually have been used for animal feed. In summer, they rely on locally raised fruits and vegetables. Infant formula is in scarce supply and smuggled in and costs 10 times what it sells for in areas under government control.

The old, the infirm, and a great many children don’t make it. In March and April alone, 185 people starved to death, according to Muaz al-Shami, 23, a media activist in Ghouta who’s opposed to the government of President Bashar Assad. Children accounted for 150 of those, he said. The Syrian American Medical Society in a recent report estimated that 560 people have died of starvation in the past two years.

People try to make a living by selling cigarettes or “anything that might help them to bring in money,” said Ayman Muslem, a media activist living in the village of Autaya. Most people earn less than 10 percent of what it costs just to buy food, he said, and many survive with the help of money sent from relatives abroad.

At the end of the day, utterly fatigued, families sit down for a meal. “It’s hardly enough for two, but it is usually shared by six or seven family members,” he said. At night, “You have no electricity, no fuel, no candles.”

In his village of 6,000, Muslem estimated that 96 percent of the population is poor and 80 percent very poor. He described a visit to one of the very poor families, where the man of the family is unemployed and has no income.

“The family has three children, and two of them have malnutrition,” he said. “They are only skeletons.” The only food is green plums, now in season. Three months ago, one of the children refused to eat any more plums and died.

Dr. Muhammad Kattub, a doctor who last year escaped eastern Ghouta and moved to Gaziantep, a town in Turkey, said that doctors come in contact daily with children who lose consciousness because of malnutrition. He recalled advising a mother to feed her daughter three spoons of yogurt a day.

“The mother said she can’t, because she has two daughters, and she feeds them by turn, one child each day,” he said….

Escaping the area means risking one’s life. Bribing one’s way out costs as much as $1,500, far beyond the reach of most. Dr. Muhammad Kattub said that during three months in 2014, 175 people trying to escape eastern Ghouta were killed by pro-government snipers.

Public health services are barely sustainable. “We get very limited amounts of medicines for very high prices,” said Dr. Hamzeh. Because they lack blood transfusion bags, doctors sometimes use bags normally used to deliver saline solution. “It’s led to the deaths of a lot of people here,” he said. “But we don’t have other choices.”

Making do with less applies also to patients with kidney failure. To stretch supplies, doctors have cut dialysis treatments from nine per patient a month to three. In April, the shortage of supplies contributed to the deaths of 10 patients, the Syrian American Medical Society said. The newly arrived supplies will provide dialysis for six weeks at the prescribed rate of nine per patient, or four months at the minimum rate, which is sure to cost lives. Doctors have to make that choice.

“About a half million people are living here,” said Dr. Hamzeh. “We have a lot of people dying here, starving. There’s no health care, no security. Every day we have massacres. You should know that the people here do not trust the U.N. at all, nor the international community.”