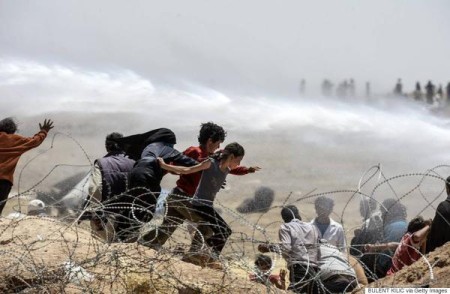 UPDATE 1615 GMT: Kurdish outlets claim the further advance of YPG militia, taking dozens of villages and farms as they close on the Islamic State in the border town of Tel Abyad.

The YPG Press Office says Kurdish fighters are now to the east of Tel Abyad and moving to cut the supply route to the Islamic State’s center of Raqqa city. It says “in the past 24 hours a large number of terrorist fighters were killed and wounded”, while declaring one Kurdish militiamen slain by an improvised explosive device.

YPG fighters now within 50 metres of Tal Abyad's entrance, to the southeast. Still no advance on the southwest.

Meanwhile, Turkish authorities say that they have reopened the border to fleeing civilians, but that the Islamic State is blocking movement.

The mayor of the Turkish border town of Akçakale, Abdülhakim Ayhan, blamed the militants, as Syrians then tried to enter Turkey by tearing holes in the large border fence.

ORIGINAL ENTRY: Kurds and allied rebels are closing on the Islamic State in the town of Tel Abyad, near an important crossing on the Turkish border.

The force has advanced steadily in the past month, closing a 90-km (56-mile) gap between the Kurdish cantons of Kobane and Cezire. On Saturday, they took the town of Suluk, 20 km (12 miles) to the southeast, and moved within six miles of Tel Abyad.

Kurdish activists claim many Islamic State fighters withdrew from Suluk to Tel Abyad before the village was taken.

Thousands of residents have fled the fighting in another influx of displaced Syrians into Turkey. There are almost 1.8 million Syrian refugees in Turkey, which also took in about 200,000 people when the Islamic State threatened the Kurdish center of Kobane last autumn.

Officials said Turkey had taken in more than 13,500 refugees in recent days, but Turkish police and soldiers did not allow anyone through on Saturday. A photographer said water cannon and warning shots were used to keep the displaced back.

Civilians on the border between Islamic State fighters and Turkish soldiers: 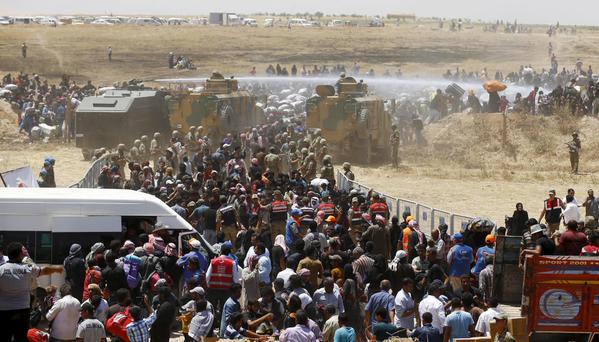 The Islamic State is also in facing setbacks in its offensive in northern Aleppo Province against rebels.

The Islamic State made initial advances in its offensive on a 25-km (16-mile) front north and northeast of Aleppo last month, including the capture of the town of Sawran near the border with Turkey. However, it has been checked, and rebels are now pressing to retake Sawran.

Rebel sources have confirmed to EA that last week’s offensive to take al-Thala airbase, in Daraa Province in southern Syria, was paused to negotiate with leaders of the Druze community.

The Southern Front was about to take over al-Thala airbase but had orders to retreat for 2 reasons:

1. The timing was bad, especially after Jabhat al-Nusra committed a massacre in Idlib, killing 23 Druze, given that most of the fighters defending al-Thala are Druze —- even though Jabhat al-Nusra is not participating in our offensive

2. There have been negotiations with the Druze in the south to withdraw their people from the airbase. These negotiations were ongoing as the offensive started.

The rebels moved on al-Thala days after taking the nearby Brigade 52 army base. Southern Front units briefly moved inside the al-Thala complex before pulling back amid airstrikes and ground resistance, including with tanks. They are now in villages close to the base.

Seventeen rebel factions have put out a statement to reassure the Druze community in Suweida Province in southern Syria, following the killing of 23 Druze residents in the northwest by a Jabhat al-Nusra unit (see below).

#Syria: several major rebel forces signed the document in which they want to reassure the Druze. #FSA #IF #Daraa pic.twitter.com/nOWXfreDE5

The statement comes after rebels paused their offensive against the regime’s al-Thala airbase, near Suweida’s borders, because of negotiations with the Druze (see below).

The Jaish al-Fateh rebel coalition has announced an offensive to complete the takeover of almost all regime positions in Idlib Province in northwest Syria.

The rebels already hold 95% of the province after advances this spring including the capture of the provincial capital of Idlib city, Jisr al-Shughour near the Turkish border, and the town of Ariha. Regime forces have fallen back on Frikka, on the M4 highway between Aleppo and Latakia on the Mediterranean coast.

Rebels reportedly captured the village of Janat al-Qura, while fighting was reported on in the village of al-Mushayrifah and the Sheikh Khattab mountain to the east of Frikka.

Rebels reportedly attacked a series of checkpoints in the area, including Khirbat Masasinah (see map):

Jabhat al-Nusra Condemns Killing of 23 Druze by 1 of Its Units: “Perpetrators Will Be Punished”

The Islamist faction Jabhat al-Nusra has condemned the killing by one of its units of 23 Druze residents in Idlib Province in northwest Syria.

Jabhat al-Nusra said in a statement on Saturday that some of its members had acted “in clear violation of the leadership’s views” and will be punished.

The unit, led by a Tunisian, killed the Druze on Wednesday in the village of Qaib Loza. Clashe began when the unit took over a house, whose owners were away, and tried to build an extension. Two fighters were also killed before rebel groups, including Ahrar a-Sham, intervened to stop the violence.

The unit was replaced and its members interrogated, but it was unclear if they would be tried by a Jabhat al-Nusra panel or by an independent sharia court.

Jabhat al-Nusra said it had immediately dispatched a committee to Qalb Loz to “reassure the residents that what happened was unjustifiable”:

This village and its people are still safe under our protection and in areas under our control. Everyone who was involved in this incident will be referred to an Islamic court and will be held accountable.