Iran Daily, June 11: Revolutionary Guards to US — “Attacking Us Will End in Your Destruction” 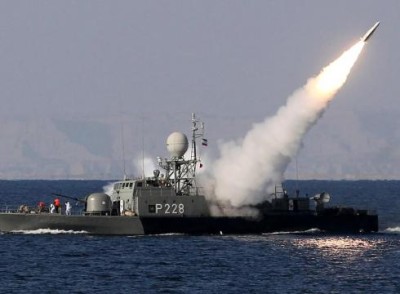 As Iran and the 5+1 Powers renew talks seeking a comprehensive nuclear agreement by June 30, Tehran’s Revolutionary Guards are continuing their rhetorical offensive against the US.

The Guards’ naval commander, Rear Admiral Ali Fadavi, put down the latest challenge in a speech on Wednesday to members of the Guards and paramilitary Basij:

The Americans should rest assured that if they take any action against the Islamic Revolution, they would not only fail to inflict any harm on this revolution, but also endanger and lose their life and existence.

Fadavi said that Iran’s naval capabilities and power ensure security along the Islamic Republic’s coasts and the Persian Gulf. Because of this “deterrent”, Tehran’s enemies “do not take any action that could be harmful to them”:

Our vessels confront the US vessels everyday, and they stand strong against their excessive demands. The Americans have realized today that if they embark on war they will sustain defeat, given the Islamic Revolution’s capabilities.

Iran’s navy has gone beyond words in several cases in the Persian Gulf in recent months. Patrol boats forced a cargo vessel with 34 crew into a southern Iranian port in April, with the ship held for weeks over allegations of unpaid debts by its company. The boats fired across the bow of a Singaporean tanker in May before the ship was able to escape the area and dock in Dubai.

Iran’s navy also challenged the US and Saudi Arabia this spring with the declaration that warships would accompany a cargo ship with aid for Yemen, amid that country’s civil war. However, Iranian officials backed away from a showdown, and the cargo ship diverted to Djibouti in Africa so the UN could verify that none of the aid was for military use.

Nuclear talks between Iran and the 5+1 Powers (US, Britain, France, Germany, China, and Russia) resumed in Vienna on Wednesday, with political talks negotiating the draft text of a final agreement. The discussions are the 7th round since a nuclear framework was announced on April 2.

The talks face a deadline of June 30. Iran and France have indicated that this could be extended, but US officials have held out so far against any negotiations after the cut-off.

Iranian police and the Government are clashing over the denial of a permit to a prominent US-based Iranian musician to perform in Tehran.

The concert on Tuesday by Kayhan Kalhor, a virtuoso of the traditional Iranian kamancheh, was called off two days earlier. Police cited “security considerations.”

On Monday, the head of the music department at Iran’s Culture Ministry, Pirooz Arjomand, criticized the decision: “Not giving a license to an Iranian musician who has worked hard to promote Iranian music in the world is not right in our view.”

Arjomand said that the necessary consultations and visa issues had been made with the Foreign Ministry. He said the ban on the concert was counter to the Government’s encouragement of cultural diplomacy: “With this approach by the police, we have to close the doors of cultural interactions with the world.”

Iranian media have reported that more than a dozen concerts have been called off in recent months by authorites. On Wednesday, a concert by well-known Iranian musician Parvaz Homay — his first in eight years — was canceled hours before it was to begin by a judiciary order.

Revolutionary Guards General: Iran Has Not Dispatched 1000s of Troops to Syria…Yet

A Revolutionary Guards general has said that the Supreme Leader has not yet decided to send thousands of troops and militia to Syria.

Speaking to members of the Basij paramilitary, General Rahim Nowi-Aghdam, said, “The Supreme Leader does not want to send armies to Iraq and Syria at the moment, but he confirms that military commanders [have been] sent so that their capabilities may be put to use in those two countries.”

Last week, Arab media exaggerated a report by an Iranian group, Ansar-e Hezbollah, into the claim that 50,000 Iranian troops had been despatched to prop up the Assad. Hezbollah’s Al-Manar outlet said 20,000 Iranian, Iraqi, and Lebanese fighters were being deployed. An official in the Assad regime then put out the number of 7,000 Iranian, Iraqi, and Afghan personnel, rising to 10,000 to defend Damascus and reclaim parts of Idlib Province in northwest Syria.

The claims followed a visit by the head of the elite Qods Force, General Qassem Soleimani, to Latakia in western Syria and Damascus, assessing the situation after the rebel takeover of almost all of Idlib Province and their advance into neighboring Hama Province.

See Iran Daily, June 10: “We Will Stand by Assad Regime in Syria”
Syria Feature: Is Iran Really Preparing to Send 50,000 Troops to Save Assad?

While pulling back the claims, General Nowi-Aghdam called on Iranians to fight in Iraq and Syria:

If you do not volunteer to fight…I will go myself, and I will martyr myself in the defense of [the shrine] of Sayyida Zeynab [in Damascus] or the Shiite shrines in Iraq….

If we do not [stop] the Islamic State, we will have to fight it in Khuzestan [in southwest Iran] and Tehran.

Foreign Ministry spokeswoman Marzieh Afkham also denied an influx of Iranian troops, telling reporters, “Raising issues like the presence of Syria’s friends, including Iran, in the country is baseless. The Syrian nation and government enjoys the power to resist.”