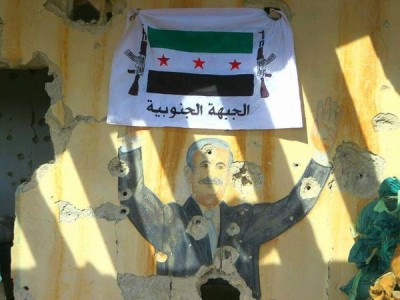 PHOTO: A Syrian Revolution flag atop a damaged wall painting of former President Hafez al-Assad in the Brigade 52 base

Op-Ed: “Only Assad’s Fall Can Preserve the Syrian State”

On Tuesday morning, rebels launched a ground assault on the Brigade 52 base in Daraa Province in southern Syria. By Tuesday afternoon, they had captured the second-largest base of its type in the country.

The Southern Front coalition started the final assault on Monday with rocket and mortar fire. Supported by multiple-rocket launchers and artillery on Tuesday, fighters moved into a nearby village before rapidly taking battalion positions within the base.

The moment that rebels moved into the “spaceship” complex in the base:

A regime tank flees the fighting:

Rebels moving inside the base, including a climb on top of a statue of former President Hafez al-Assad:

Tearing down a poster of Bashar and Hafez al-Assad:

Soon after the takeover, rebels reported that they had confirmed 70 slain Assad troops and were still counting. Local sources said hundreds tried to flee to Druze areas in Suweida Province, with many killed on roads as they retreated. Officers were said to be travelling to Damascus, as the army tried to withdraw equipment from Suweida for defense.

Graphic video has shown the bodies of fleeing soldiers.

A Druze activist at the Suweida national hospital said he saw many regime dead and wounded, with soldiers “in a state of terror and panic”. He indicated that Iranians had also been at Brigade 52, saying their injured were being treated before the Syrians.

Rebels put out the names of 11 of their dead, including the colonel who planned the operation. This morning, the Local Coordination Committees report the loss of 25 fighters.

Footage of rebels with large stocks of weapons and ammunition left in the base:

Rebels dismantling mines in the nearby village of Mleihat Gharbiyyeh:

State news agency SANA headlines, “Army Kills Over 40 Jabhat al-Nusra Terrorists in Daraa“, but makes no reference at all to the fate of Brigade 52.

A woman hands out sweets to rebels after news of the victory: 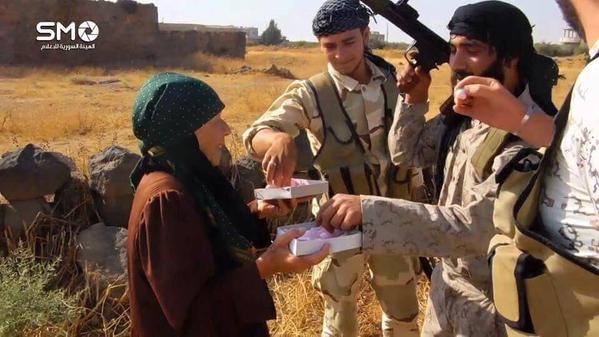 The Brigade 52 base linked the defense of Daraa and Suweida Provinces in the south, near the Jordanian border. Its fall is unlikely to herald a rebel advance into Suweida, given that the province’s large Druze population may not welcome fighting on its soil. However, any Assad armor and heavy weapons may now be cut off in the area — before Brigade 52’s fall, reports indicated that Druze groups were blocking regime attempt to move arms and vehicles to defend other parts of Syria.

In a series of tweets this morning, Druze leader Walid Joumblatt, saying the Assad regime is “finished”, has called for reconciliation with the Syrian opposition and rebels. He has asked the Druze of Suweida Province to “unite” with their neighbours in Daraa Province.

Rebels are heralding Brigade 52’s fall as the loss of the “first part of the first line of the defense of Damascus”. This does not point to an opposition drive on the capital; however, it pushes back the regime’s attempt earlier this year to shore up Damascus’s southern buffer zone. An erosion of the regime’s capabilities and control of territory around the southern ring is likely, with rebels hoping to link up with comrades to the east of the capital.

The next objective of the Southern Front, including the Free Syrian Army, may be the capture of the al-Thula airbase, located near Brigade 52 and now isolated.

#Syria: Statement – #FSA Rebel groups announcing the start of the battle for al-Tha'lah Airbase near Brigade 52 base. pic.twitter.com/sML7Sjylpd

Rebels attacking the base, claiming destruction of a tank:

A man flashes a Victory sign atop a statue of former President Hafez al-Assad in Daraa Province: 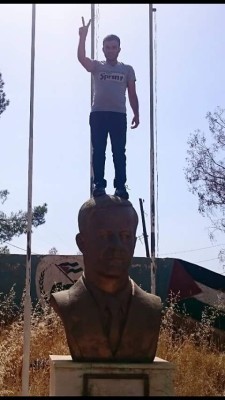 Rebels and EA sources confirm that a Tunisian unit in Jabhat al-Nusra has killed 23 Druze in Idlib Province.

Details of the incident are still sketchy but one account indicates that the confrontation began when the Tunisian fighters sought the “conversion” of a Druze house.

It is unclear if Jabhat al-Nusra will punish the perpetrators and, if so, whether they will be turned over to an independent Sharia court rather than being tried internally by the Islamist faction.

Hezbollah’s leader Hassan Nasrallah has vowed to “finish the battle” with the Islamic State, after the deadliest battles between the groups in northeast Lebanon near the Syrian border.

“The battle with ISIS in Qalamoun has started,” Nasrallah said in a televised speech. “They started the battle. No problem. We will finish it.”

Hezbollah said it repelled Tuesday’s attack on four outposts on the outskirts of Ras Baalbek, but suffered the death of eight fighters. It claimed that 48 Islamic State fighters were killed.

Nasrallah said “Yesterday’s attacks hit several targets, but Hezbollah fighters were brave in their response and scored several casualties and destroyed a lot of their vehicles.”

He admitted, “The resistance also suffered casualties during this battle,” and added:

We will continue until all terrorists are uprooted. We confirm that we will not let any terrorist remain on the outskirts.

The battle comes as Hezbollah tries to take the mountains around the northeastern town of Arsal, where both Jabhat al-Nusra and the Islamic State fought the Lebanese army last summer.

Hezbollah has been pursuing an offensive since early in the Qalamoun region on the Syrian side of the border, hoping to clear out Jabhat al-Nusra and Syrian rebels for a buffer zone in the event of President Assad’s fall from power.

Claims are circulating that the Islamic State has blown up a pipeline in central Syria, feeding natural gas from the east to the suburbs of Damascus.

The militants reportedly carried out the attack near the T-4 military airport in the eastern Homs Province shortly after midnight on Wednesday.

The Islamic State has taken almost all of Syria’s oil fields and about half of the country’s natural gas capacity, including fields and the T-3 pumping station during an offensive that captured the historic city of Palmyra last month.