Syria Op-Ed: “Only Assad’s Fall Can Preserve the Syrian State” 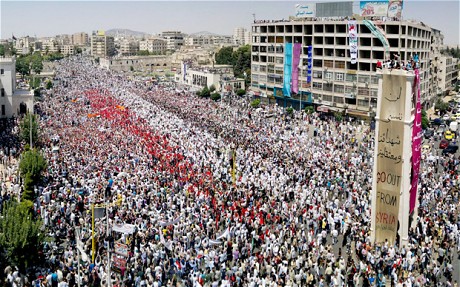 M. Housam Hafez, the head of the Free National Assembly of Employees of Syrian State Institutions, writes for The Hill:

Many international observers believe that Syria is on the verge of state collapse. In their minds, the fall of Bashar al-Assad will lead to wholesale anarchy and the destruction of state institutions. They are mistaken. The men and women who once operated the Syrian state have already defected en masse, and they are now organizing new, better state institutions that will rise from the ashes of Bashar al-Assad’s brutal reign. It is Assad’s vicious dictatorship that is doomed, but the Syrian state will survive. In fact, only Assad’s fall can preserve the Syrian state and allow the state to rejuvenate itself.

I lead the National Assembly for Free Workers of Syrian State Institutions, which was formed in 2012 and has a mission to rebuild the Syrian state with modern, democratic institutions. Over the past three years, we have accumulated thousands of defected politicians, civil servants, and other state employees. Our ranks encompass the full diversity of Syrian society. Diplomats, judges, lawyers, professors and doctors are all included in our membership, and we screen and vet each one of them so that they are trained to help build a new, modern Syrian civil state.

The overwhelming majority of civil service defectors envision a democratic, multi-party state in which the rights of all religious and ethnic groups are protected. Many of them announced their defections in direct protest of the regime’s brutal crackdown on the pro-democracy movement. In acts of extraordinary professionalism and bravery, many of them continue their work in liberated areas despite the ongoing sieges, bombardments and ground attacks by Assad forces and regime-allied militias. At times, defected civil servants even continue their work despite receiving little or no payments for it.

The empowerment of these civil servants goes hand in hand with fair democratic elections. In any political transition, Syrian civil servants will be tasked with shepherding the state from rule by the Assad mafia to the rule of law. Allowing vestiges of Assad’s power to remain will not aid our efforts; rather, a continued role for Assad’s inner circle will only weaken us and undermine the Syrian state.

To understand why, we need to look back at Syrian history and at the Assad regime’s pernicious impacts. At the dawn of Syrian independence in 1946, a liberal parliamentary system and a democratic political culture emerged. Unfortunately, that beautiful dawn was soon eclipsed by a series of coups that eroded Syria’s newborn democracy. The Syrian constitution was repeatedly altered, reducing its prestige and undermining the rule of law. These negative trends culminated in a 1970 coup by Hafez al-Assad, the father of the current dictator.

Under Hafez al-Assad, all elements of democratic political culture were eliminated. The Syrian state was turned into a tool of oppression with three layers of governance and control.

The first layer, the military and intelligence layer, was the most effective and cruel. It represented the “iron fist” by which Assad clung to power despite widespread opposition by ordinary Syrians and rampant corruption. It is well-known that the makeup and behavior of this sector was largely determined by strong favoritism toward Assad’s Alawite sect.

The second layer of state authority was the Baath Party, which was headed by Hafez al-Assad and was the supposed source of his legitimacy. Although the Baath Party theoretically had the right to “elect” a new president, Assad transformed it into a rubber stamp and an echo chamber for his personality cult. The 1973 Syrian constitution was produced at a time when Assad and his allies dominated the political scene, and they used the constitution to make the Baath Party the sole ruler of state and society.

While the Assad regime achieved dominance over the top two layers of the Syrian state, these two layers were insufficient to run a sprawling state apparatus that served millions of people with complex needs. Assad was forced to deal with a third element of the state, the civil service sector, which could not be destroyed despite the regime’s political vendettas. The civil service sector struggled under the Assads, as it was fully subjugated first to the Baath Party and then to the military and intelligence agencies. But it survived.

Of course, it is well known that the Syrian civil service sector suffered from widespread financial and administrative corruption under the Assad regime. Indeed, over the past four years, Assad has deployed many civil and state institutions in his dirty war against the Syrian people. However, the civil service also fostered a strong sense of professionalism that included all segments of Syrian society. Civil servants who once served their country loyally under the Assad regime have now defected and continue to serve their country loyally, this time by helping to unite Syrians against Assad’s bloody repression.

While Syrians are disappointed at Assad’s exploitation of state institutions, they know that civil servants and other state employees are an absolute necessity for peace and stability during any political transition. They also know that a large number of Syrian civil servants have defected, thereby drawing a clear distinction between Syrian state institutions and the mafia that used to run Syria.

Already, within the past three years, the National Assembly for Free Workers of Syrian State Institutions has accomplished feats we could not have dreamed of while encumbered by Assadist political vendettas. We are ready to unite with all civil servants inside the government who have clean hands, rebuild the Syrian state, and counteract the violent extremists now threatening our country.

However, preserving remnants of Assad’s power in the new Syrian state would only complicate our efforts. It is a miracle that Syrian civil service institutions even survived the previous 50 years of Assad rule. But survived we have–and now, speaking from 50 years of accumulated institutional experience, we say that the collapse of the Assad regime is an essential first step towards rebuilding Syria as a modern democracy responsive to its people.