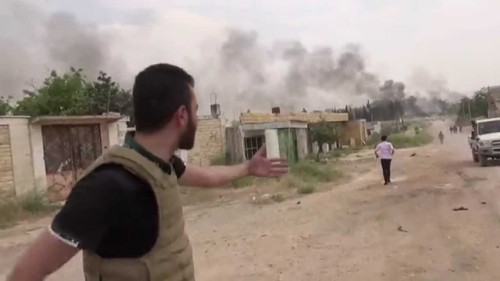 UPDATE 2030 GMT: The Islamic Front claims a further advance, with rebels retaking the village of Nahlaya, near the town of Ariha.

Nahlaya was occupied by the regime during a counter-offensive, including elite forces, after the fall of Idlib city to rebels in late March.

Activists are also claiming that rebels have moved into the village of Kafr Najd.

Less than 48 hours after rebels launched an offensive the regime’s Mastoumeh camp — its last military camp south of Idlib city — the opposition has taken the position as Syrian forces collapse.

Witnesses say Syrian troops are trying to flee south to the town of Ariha. However, the retreat is difficult under rebel fire, as the roads are filled with burning tanks and vehicles. Opposition fighters have been seen chasing the fleeing troops through olive groves.

Abu Issa, leader of the rebel faction Suqour al-Sham, has posted on Twitter that queues of reigme soldiers — “you bastards” — are being “cut down everywhere”. Riad al-Assad, the former head of the Free Syrian Army, has also tweeted about the victory.

The army unit which was deployed in al-Mastouma camp was repositioned in Ariha….All members of the unit are well….Army units are establishing defensive perimeters around Ariha following a fierce attack launched by terrorist groups on al-Mastouma village.

With the Syrian Armed Forces withdrawal from the al-Mastoumah Camp, the Syrian Government stronghold of Ariha becomes endangered because of the new threat posed from the northern axis that was once part of the supply route….

The militants from Harakat Ahrar Al-Sham did not waste much time attacking the Syrian Armed Forces’ defenses on the outskirts of Ariha.

Orient News reporting from the camp:

A tank with its turret blown off:

Mosques in Idlib city have put out announcements and residents have handed out food to celebrate the victory. 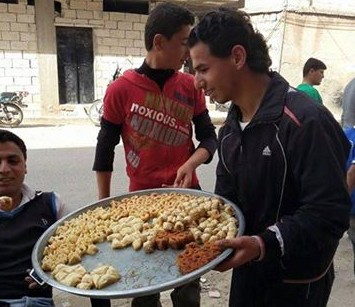 Rebels closed on Mastoumeh after they captured the provincial capital of Idlib on March 28. However, regime forces resisted in the heavily-fortified complex as well as in the nearby Qarmeed (Brick Factory) camp, and the Assad regime promised that the area would be reclaimed, with elite troops moving north.

However, the regime counter-offensive was checked and rebels pushed Syrian forces out of Qarmeed in late April, allowing them to concentrate attacks on Mastoumeh. The final offensive was launched on Sunday with a vehicle-borne bomb, as rebels claimed Mastoumeh village and the nearby hill.

Rebels have also pushed the Assad forces out of villages taken in the counter-offensive and are threatening to take Ariha, south of Idlib and the largest town still held by the regime in the province.

Activists are noting that today’s victory comes almost four years to the day since regime forces at Mastoumeh killed scores of civilians: