Syria Daily, May 20: Can Assad Stop the Rebels? 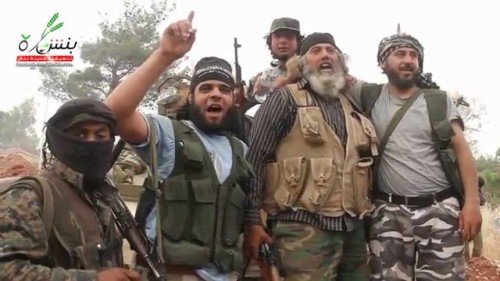 Syria’s rebels won another significant victory on Tuesday, the latest in a series of defeats for President Assad’s forces from the northwest to the south of the country.

The rebels captured the Mastoumeh military camp in a two-day offensive, having surrounded the position after their capture of Idlib city on March 28. The heavily-fortified complex was the last held by the regime between and the town of Ariha to the south.

The opposition also claimed villages near Ariha on Tuesday, retaking areas such as Nahlaya occupied by Syrian forces — some of them elite units — in a counter-offensive in April. Ariha, the last significant town held by the regime in southern Idlib Province, is surrounded and could soon be attacked.

The moment of victory in Nahlaya, with fighters firing in celebration and even shooting into the bodies of slain Syria troops:

Jabhat al-Nusra fighters with a Syrian military convoy, attacked as it retreated from Mastoumeh to Ariha — other video showed fleeing Syrian troops on the highway:

Rebels at an overrun regime checkpoint on the road to Ariha:

Since the end of March, the rebels have moved into the provincial capital of Idlib and the city of Jisr al-Shughour, near the Turkish highway between Aleppo and Latakia on the Mediterranean. An offensive across southern Idlib and northern Hama Provinces is threatening to cut all regime movement between Idlib and Latakia. In the south, rebels have advanced along the Jordanian border, taking the historic town of Busra al-Sham and the regime’s last crossing.

Attention will now be paid to the next move of the rebels, working in the Jaish al-Fatah operations room, following the likely fall of Ariha. A move to the west is unlikely, given the strength of Assad forces and his base of support in Latakia Province. Instead, the opposition could pursue an advance through Hama Province towards Hama city, a symbol of resistance to Assad with the 1982 rising that was bloodily suppressed by his father Hafez. Or it could move to the east, putting press on the Syrian military in Aleppo Province and the divided Aleppo city.

Assad will also be watched. Two weeks ago, in a speech on Martyrs Day, he promised that the losses would be reversed, with the rescue of more than 200 troops trapped in Jisr al-Shughour. So far, the high-profile mission to move into the city has made little progress. Now any prospect of reclaiming Idlib has disappeared, and the Syrian military — facing a shortage of forces and the apparent reticence of Iran to commit any manpower to the north — will probably be on the defensive.

See Syria Special: 3 Reasons Why Assad Will Lose The War

The Hezbollah offensive in the Qalamoun region near the Lebanese border is offering some PR consolation as well as the occupation of hilltops and mountains, and the regime is trying to claim success against the Islamic State in eastern Syria. However, this appears to be limited compensation for the strategic advantage gained by the rebels in the last seven weeks.

The Islamic State has taken over the ancient city of Palmyra after a week-long offensive, as Syrian forces withdrew on Wednesday night.

State news agency SANA says tersely at the bottom of a military round-up, “Popular defense groups withdrew from Palmyra neighborhoods after securing the evacuation of most of the families as ISIS terrorists came with large numbers, trying to enter the archaeological sites.”

Only 72 hours ago, the Syrian military was saying that it had pushed the militants out of Palmyra, famed in the Roman Empire; however, the Islamic State launched another assault on Tuesday and moved through the city today.

Activists report that US warplanes have bombed a road near Kafranbel in Idlib Province in northwest Syria, causing casualties.

The Idlib News Network reports at least four people killed and says the attack was on a headquarters of the Islamist faction Jabhat al-Nusra.

The US has attacked Jabhat al-Nusra from September 22, the first day of airstrikes that also targeted the Islamic State. Scores of civilians as well as fighters have been killed in Aleppo and Idlib Provinces.

Kafranbel became prominent in the Syrian uprising from 2011 for its posters and banners during Friday protests. Its latest message challenged President Obama’s failure to act effectively over the crisis.

A pro-Assad activist, in contact with a source in Palmyra, says the Islamic State now control part of the historic city after the renewal of their offensive on Tuesday:

#ISIS is in control of the #Palmyra National Hospital

Most of the civilians have been escorted from the northern residential area of #Palmyra to the southern sector.

Leith Fadel, who runs al-Masdar News, says there is fighting in the center of Palmyra. He assures that Syrian forces still hold Palmyra Castle, the Badiyah Military Branch, the southern ruins from the Roman era, and the western hills of the city.

The Syrian air force is trying to check the Islamic State’s advance by bombing the road from Sukhna to the east.

Jaish al-Islam claims that it has taken the outer defense line in its assault on the regime’s Brigade 39 base in East Ghouta:

The base is northeast of Damascus, near regime-held Adra and Tel Kurdi, recently captured by the rebels (see map).

The Islamic State renewed its attack on Palmyra in central Syria, moving on the National Hospital and the village of Al-‘Amuriyah to the north of the ancient city, on Tuesday.

“There are clashes at the western entrance of Palmyra this morning, which lies on the road that leads to Homs city,” Homs Province Governor Talal Barazi acknowledged.

A pro-Assad website indicates that the militants are inside Al-‘Amuriyah, fighting Syrian forces, but that the assault on the hospital has been repelled.

The Islamic State launches its offensive on Palmyra, famed as a traveler’s desert stop in the Roman Empire, a week ago. It briefly held northern and eastern areas of the city before it was pushed back.

At least 19 people were killed on Tuesday by a regime airstrike on a mosque in Darkoush in Idlib Province.

The Local Coordinating Committees has posted the names of 17 of the victims.

The attack came hours after the regime lost its last military camp, Mastoumeh, south of Idlib City. Darkoush was also struck on April 26, just after the Syrian military was defeated in the city of Jisr al-Shughour, with scores killed and wounded.

The LCC claimed confirmation of 88 victims across Syria on Tuesday, including 46 in Idlib Province.

Recovery of bodies from a barrel bomb dropped on the Balat neighborhood in Aleppo — at least seven people have been killed: