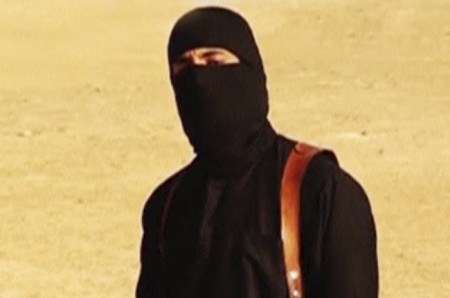 British and international media are awash this morning — to the exclusion of any other story about Syria — with stories about the identity of “Jihadi John”, the executioner in beheading videos of US and British hostages. He is Mohammed Emwazi, a 26-year-old Kuwaiti-born man from London.

Much of the coverage is focused on retribution for Emwazi’s executions. In Britain, questions are being raised about how the security services “lost” Emwazi, who had been barred from travelling abroad, so that he left the country in 2013. New labels are being created, like “bourgeois terrorist“.

Lost in the hype are serious issues beyond Emwazi’s transformation from “modest” young man to a jihadist executioner in Syria. CAGE, a British-based “independent advocacy organisation working to empower communities impacted by the War on Terror”, writes about Emwazi’s repeated interrogations by British and international agencies and the prohibition on his return from the United Kingdom to Kuwait.

According to the organization, from whom Emwazi sought help, he was refused entry into Tanzania in 2009 — apparently at the request of British authorities — and, after he was sent to Amsterdam, was interrogated by Dutch and British intelligence officers.

[He] drifted away from accusing [Emwazi] of terrorism and moved to courting him to work for the MI5 in front of the Dutch intelligence officer.

“Listen Mohammed: You’ve got the whole world in front of you; you’re 21 years old; you just finished Uni – why don’t you work for us?”

[Emwazi] declined the offer and explained that being a normal person, there was nothing he could even help them with.

“Nick” left his number on a piece of paper and the words and added: “We’ll see you in London, mate”.

Yet more interrogation on Emwazi’s return to Dover in Britain followed before Emwazi was released. He soon went to Kuwait to work for a computer programming company.

Emwazi worked in Kuwait for almost a year, returning twice to Britain to visit family. On the second occasion in July 2010, he was interrogated for six hours and allegedly assaulted. He would never make the return journey to Kuwait: for three years, he was blocked by British and Kuwaiti authorities.

Reviewing the case — referring to past episodes in Northern Ireland and in Britain’s “War on Terror” — Alan Greene of Durham University writes for The Conversation:

[Emwazi’s] claims may have been false or exaggerated. But they nevertheless serve to highlight the potential for counter-terrorist measures to have counterproductive effects – particularly if they target a specific minority group….

Even if Emwazi felt ostracised and victimised, none of this condones, justifies or excuses his horrific actions. However, taking a heavy-handed approach causes problems for the people being monitored. And as much as we might rail against that resentment being used as justification for violence, we must also face up to the fact that it may simply not be productive for people to have their lives stunted by counter-terrorism efforts.

In a challenging discussion beyond the superficial headlines, Asim Qureshi of CAGE speaks with Jon Snow of Britain’s Channel 4 News: