Syria Daily, Feb 28: Kurds Hit Back at Islamic State With Capture of Key Town in Northeast 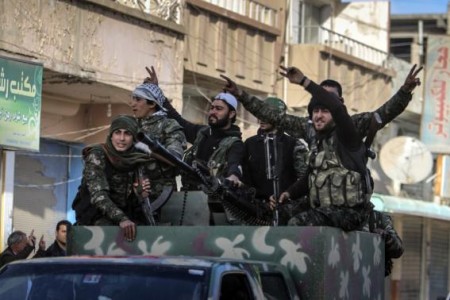 1st-Hand: Talking to Assad’s Generals and Top Officials in A Devastated Country

Reclaiming the initiative from the Islamic State in eastern Syria, Kurdish forces captured the key town of Tel Hamis on Friday.

Kurdish activists and images testified to the victory, with the Kurdish militia YPG celebrating the retreat of the jihadists.

Earlier this week, the Islamic State had advanced along the Khabur River in Hasakeh Province, taking a series of villages. The jihadists reportedly burned churches and abducted hundreds of Assyrian Christians, forcing others to flee to Hasakeh city.

“The flag is flying over Tel Hamis. We are now combing the city for terrorists and mines,” militia spokesman Redur Xelil said. “Daesh [the Islamic State] continue to have a considerable number of territories and forces. But we can say we have stopped its advance.”

Celebration of the victory:

Tel Hamis is on the route to the Islamic State’s territory in northwest Iraq, including the town of Sinjar, and is central to jihadists’ ability to move around northeast Syria and the Kurdish cantons.

Kurdish forces are hoping to build on the advance to take Tel Abyad and connect the Kobane and Jazirah cantons.

While territory has changed hands back-and-forth in Hasakeh Province this month, Kurdish forces have been pushing back the Islamic State in northeastern Syria since the jihadists failed, after a four-month offensive, to take the Kurdish center of Kobane earlier this month.

Kurdish forces during the operation to retake the town:

The Assad regime is claiming an advance in its weeks-long offensive south of Damascus, including the capture of the villages of Himrit, Sultaniyeh, and al-Habaria.

Trying to push back months of rebel gains, the regime launched an offensive earlier this month along a 20-km (12-mile) front in southern Damascus and northern Daraa Provinces. Syrian forces gained the town of Deir al-Addas but were then checked and concentrated on fortifying the new frontline.