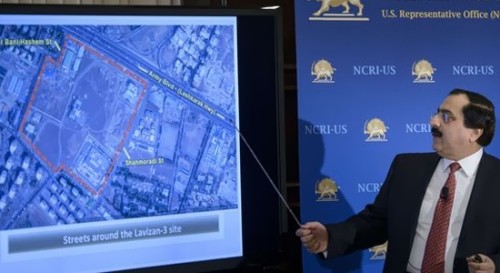 On Tuesday, the National Council of Resistance of Iran took out space at the National Press Club in Washington for a dramatic announcement: it was revealing a secret “underground nuclear facility” operating since 2008.

Linked to the armed insurgency Mujahedin-e Khalq — listed as a “terrorist group” by the US until 2012 — the NCRI said the facility “Lavisan-3″ in north Tehran was enriching uranium. The complex was reached through tunnels leading from under a building ostensibly used to process passports and identity cards.

The timing of the revelation may be significant. It comes as the US and Iran are at a critical point in negotiations for a comprehensive nuclear agreement before a July 1 deadline. If true, the claim would bolster the efforts of members of Congress and right-wing foundations and think tanks to block any deal.

NCRI’s deputy director in Washington, Alireza Jafarzadeh, said, “It’s absolutely senseless to continue negotiations and decide the number of centrifuges you’re going to have if we have these serious issues lingering out there.”

But are the claims true, paralleling NCRI’s revelation of the Natanz enrichment facility in 2002? Or are they disinformation to sabotage the nuclear talks? Even The Washington Post, one of the outlets to headline the “revelation”, is not sure: “Over more than a decade, the NCRI has made several assertions about Iran’s nuclear program, not all of which have proved accurate.”

The caveat may be justified, once you examine the five photographs in the NCRI’s presentation.

Four of the pictures are overhead satellite images of the Lavisan-3 complex, which do no more than show the existing knowledge that it is a military base.

It is the fifth photograph which is the “smoking gun”, but not to prove the Iranian regime’s secret operations. To the contrary, it exposes the likelihood of a disinformation campaign by the NCRI.

This, according to the NCRI, is the “image of one of the shielding doors at Lavizan-3 installed at an underground hall” — a “3 by 3 meter and 40 centimeter-thick, radiation proof doors…[with] shielding material, including lead, inside the doors to prevent radiation leaks”. 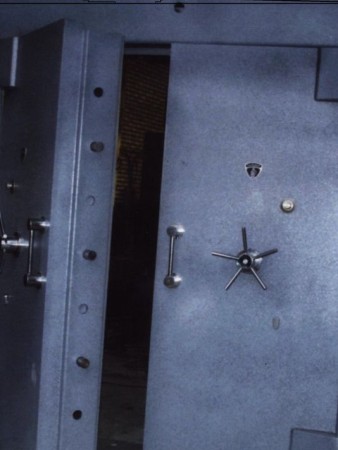 Given this description, it is surprising to see a remarkably-similar photograph on the website of GMP, an Iranian company making safes, as one of its “explosion-proof doors”: 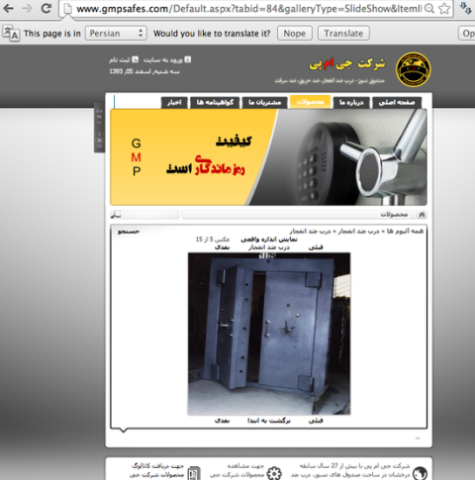 The blogger “Florida Democrat” at The Daily Kos site asks inconveniently, “Why would a radiation resistant door be made out of stainless steel? Shouldn’t it be covered completely by lead?”, and then notes:

The original shows windows with sunlight coming in from behind the safe. It’s clearly not in a secret underground bunker, but rather a warehouse which makes perfect sense for a safe.

Perhaps the US State Department did its own image search before commenting on the NCRI’s claims. Spokeswoman Jen Psaki was notably cautious on Wednesday:

[We] have no information at this time to support such a conclusion. We have seen these claims and we take all such reports seriously.

The NCRI replied on Thursday:

The image displayed at the press conference had been provided to the NCRI by its sources in Iran and was not grabbed from the GMP website. In fact, that image was posted on the Company’s website recently as a product sample, whereas the NCRI had been working on compiling information on Lavizan-3 for the past several years and thus possessed the image long before it was posted on the GMP website.

This is the image of one of the doors installed at one of the underground halls at Lavizan-3. It was taken after its construction at GMP workshops and prior to being transferred to Lavizan-3 for installation. In its report, NCRI did not specify the name of the company that had built the doors, and it chose not to show the full picture for security reasons and to protect the source(s) of the information.

The NCRI adds, “In a marketing booklet published by GMP, it boasts…[that] ‘this product will probably be used in Iran’s nuclear energy program, and as such is under sanctions and cannot be practically procured from abroad’….(The marketing booklet written in Farsi language is available.)”