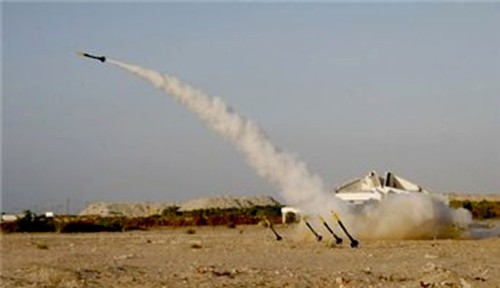 UPDATE 1815 GMT: Jaish al-Islam has halted rocket attacks on Damascus, with leader Zahran Alloush declaring that the curfew on civilian movement is lifted:

However, Alloush said the rocket fire would resume if the Assad regime again bombed insurgent-held areas in East Ghouta — where more than 60 people were killed on Thursday — near the capital.

UPDATE 1615 GMT: Jaish al-Islam have repeated that they have not used mortars in attacks on Damascus today, claiming that any damage from such attacks is due to regime operations.

UPDATE 1415 GMT: Regime warplanes continue to pound the East Ghouta — including the key town of Douma, northeast of Damascus — with at least 40 strikes on Thursday. Local activists say at least 60 people have been killed and hundreds injured.

Aftermath of a strike:

UPDATE 1300 GMT: Sources and images are indicating both insurgent and regime attacks on Damascus on Thursday.

Aiming at military installations and positions with Katyusha rockets and shells, insurgents have hit the Kafarsouseh, Abu Roumaneh, al-Maliki, and Mezzeh areas in Damascus.

However, it appears that the regime may be responsible for an attack on the historic Umayyad Mosque in the Old City, which is not close to the areas hit by insurgents.

Images of the strike, in the Mosque’s courtyard, point to a mortar rather than a rocket or artillery shell. A well-placed source — who is not connected to the opposition — assesses that the Syrian military is responsible.

In Baramkeh, adjacent to Kafarsouseh and near the President’s Bridge, both the Faculty of Economics at Damascus University and the Abbas al-Hamoud School have been struck — possibly by mortar fire.

Zahran Alloush, the head of Jaish al-Islam, has said on Twitter that the mortar shells are being fired by the regime from the Palestine Intelligence branch and the National Security complex towards civilians, especially in the Midan section.

Alloush claims the regime’s mortars are “to cover the painful results of the [insurgent] attack and paint Jaish al-Islam in a bad way”. He repeated Sunday’s warning to civilians not to roam in public places.

Earlier the Islamic Front’s spokesman circulated Twitter messages that the insurgents have not aimed at schools, churches, or mosques. Any attacks on them must be from regime positions, the messages claimed.

All schools have been closed and university and school examinations have been postponed. Officials have been sent home, and offices closed.

Damascus Police say five people have been killed and 40 have been wounded.

The spokesman for the insurgent Islamic Front, Captain Islam Alloush, has circulated messages that all shells falling on schools, mosques, or churches are coming from regime positions:

The leading insurgent faction Jaish al-Islam has announced the start of a campaign of “hundreds of rockets” on military targets in Syria’s capital Damascus.

Jaish al-Islam leader Zahran Alloush, who is also the military head of the Islamic Front bloc, said on Wednesday morning on Twitter that the attacks would continue until Damascus is “cleansed” of Syrian troops and militia.

Sirens are sounding across Damascus, with some sources speaking of a “war zone”.

I spoke to some family in Damascus earlier, they are all huddled in a bedroom and haven't left it since the shelling started.

It's raining rockets on #Damascus from Ghouta. Ppl are freaking out.

At least 50 mortar strikes near my grandmothers home in central Damascus since this morning. Relentless, nonstop.

A military source told State media that at least eight people have been injured.

Eleven days ago, Jaish al-Islam fired more than 100 Grad and Katyusha rockets at regime checkpoints, headquarters, and installations in Damascus, including the wealthy Midan area. It said the assault was in response to the Syrian military’s aerial bombardment of insurgent-held areas near the capital.

State media said several civilians were killed by the attacks, while opposition activists claimed that casualties were inflicted by regime mortar fire on the neighborhoods rather than the Jaish al-Islam rockets.

Far from relenting in its attacks, the Syrian military has escalated bombardments of the nearby areas in the past week. In Douma, northeast of Damascus, dozens of civilians have been killed and wounded this week by airstrikes. On Wednesday, activists said that a regime attempt to invade the suburb was repelled by insurgents.

Fierce clashes were also reported in the insurgent-held Jobar in northeast Damascus, with at least 11 Free Syrian Army fighters killed.

Alloush said this morning that the regime “dogs” would taste what it is inflicting on the civilians of East Ghouta, the area largely held by insurgents near Damascus.

Jaish al-Islam has warned civilians to avoid all regime positions and vehicles and to observe a curfew “until further notice”.

Sources are reporting a major Islamic State assault on insurgents in Aleppo Province in northern Syria:

ISIS has just now launched a large attack on rebel positions in Marea in north #Aleppo, coming in from the south after amassing in Akhtarin.

A jihadist cell has also struck near Aleppo:

#ISIS car bomb kills 2 & wounds 5 at an oppo checkpoint near Kara Khoja factory in the northern suburbs of #Aleppo, #Syria

Insurgents claim that they blew up a pro-regime militia headquarters west of Damascus on Thursday, killing at least 30 Hezbollah, Iranian, and Iraqi fighters. One militiaman escaped with wounds. 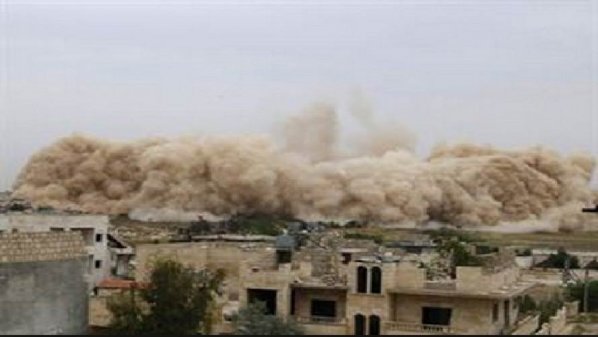 The outlets say there have been civilian casualties.

At least 18 people were killed by regime barrel bombs on the Baedeen roundabout of central Aleppo on Thursday evening, according to ANA Press.

Another 50 people were wounded.

The Organization for the Prohibition of Chemical Weapons formally expressed “serious concern” on Wednesday over the findings of its mission that chlorine was used in attacks on three villages in northern Syria from April to August 2014.

The mission said “with a high degree of confidence” that the chemical had been used in attacks in Idlib and Hama Provinces. Although it did not formally name the Assad regime as the attacker, its evidence — interviews with witnesses, victims, and medical staff, videos, and images — all supported the claims of chlorine canisters inside barrel bombs dropped by regime helicopters.

The OPCW “expressed its strong conviction that those individuals responsible for the use of chemical weapons should be held accountable”.

Iran tried to block the formal declaration, negotiated by the US and Russia, but the Americans pushed the OPCW’s Executive Council to publicly vote on the statement, isolating Tehran.