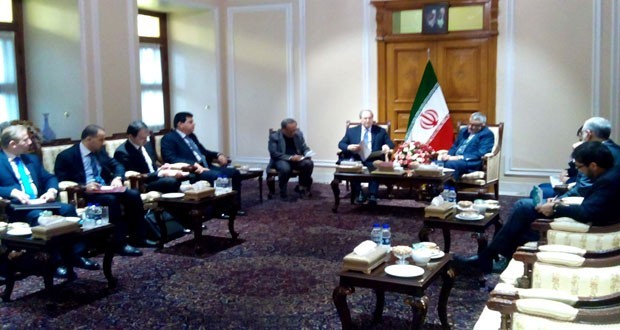 Boroujerdi, who chairs Parliament’s National Security Commission, praised the regime and the Syrian people “for their continued resistance to the takfiri terrorists”. He also claimed that an Israeli airstrike on January 18, which killed Hezbollah and Iranian commanders and fighrers, proved coordination between Israel and “terrorist groups”.

Miqdad — who saw his Iranian counterpart Abbas Araqchi in another meeting — expressed appreciation for continued support from Iran, saying the Iranian-Syrian relationship “has an impact on regional and world politics”.

Syrian State media said the two men showed that Damascus and Tehran are “standing in one trench” to combat terrorism.

Neither Iranian nor Syrian media referred to the vital issue in Iranian-Syrian talks for more than a month: the level of Tehran’s essential support for a Syrian economy facing shortages of food and energy, production difficulties, and currency devaluation amid the four-year conflict.

Syria has been seeking a renewal of Iran’s line of credit — important for purchases of oil, gas, and food — as a $3.6 billion line, agreed in July 2013, soon expires.

In a sign of defiance of economic problems, the Rouhani Government has increased the bonus for public servants for Iranian New Year (March 21).

There had been uncertainty over whether the traditional bonus would even be paid this year, but the Government said it would be 603,500 Tomans (about $215 at official exchange rates), a rise of about 100,000 Tomans from 2014.

The bonus will be paid to public employees and retirees in mid-February.

Rouhani: “We Need to Increase Our Revenues”…But No Details How

Speaking to businessmen in Isfahan in central Iran, Rouhani gave no details of how this would be achieved, merely saying that the Islamic Republic should invest more in new technologies and related areas.

Without explicitly saying that improvement might rest on a comprehensive nuclear deal with the US and other powers, he said that “his administration was set to develop Iran’s foreign policy in the next Persian calendar year (starting March 21) so that the country will witness better conditions”.

Iran’s oil revenue is projected to remain at $30 billion this year, down from $100 billion before US and European sanctions took full effect in 2012.

The situation has been worsened by a fall of more than 60% in the global oil price since June, undermining the revenue projections in the Government’s draft budget for 2015/2016.