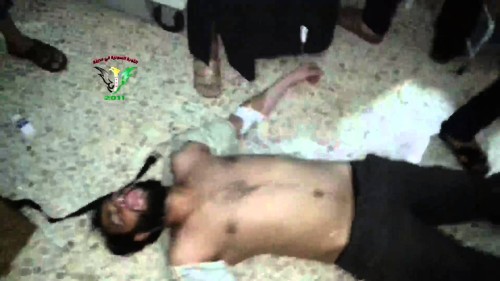 International inspectors have confirmed that President Assad’s forces used chemical weapons on towns and villages in northwest and central Syria in spring 2014.

In a 117-page report, obtained by Al Jazeera and the Associated Press, the Organisation for the Prohibition of Chemical Weapons confirmed that chlorine gas was used in the attacks in Idlib and Hama Provinces.

In April and May 2014, regime helicopters dropped chlorine canisters inside barrel bombs on at least five occasions on towns such as Kafrzita and Talmenes. At least 13 people died, and a doctor said there were more than 1000 victims suffering from breathing problems.

The attacks came as the Syrian military was trying to take the nearby town of Morek, on the main highway between Hama and Aleppo.

The Assad regime has always denied the use of chlorine, but accounts from eyewitnesses and doctors at the time, as well as video footage of victims, confirmed the attacks:

See Syria Audio: Doctor Describes Latest Chlorine Attacks by Assad Regime
Syria Videos: New Regime Chemical Weapons Attack on Kafrzita in Hama Province?
Syria: VDC Report on Regime’s Chemical Weapons Attack on Kafrzita
.
The OPCW had issued two interim findings that pointed to the conclusions in its latest report. No extracts were made public, but the US Ambassador to the UN, Samantha Power, tweeted:

The OPCW interviewed 37 witnesses and included photographs and descriptions of 142 videos and 189 pieces of material obtained by the investigators.

The UN disarmament chief Angela Kane told reporters that the OPCW mission is still trying to clarify gaps in the Assad regime’s declaration of its chemical weapons — promised after the Syrian military carried out widespread sarin attacks near Damascus in August 2013 that killed up to 2,000 people — and hopes to destroy all remaining production facilities by June.