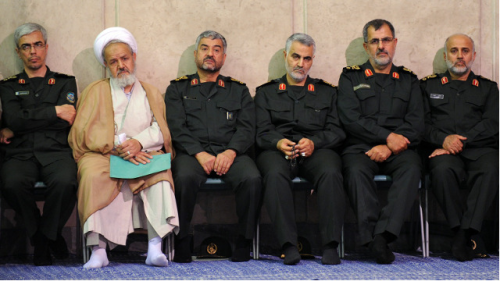 The Revolutionary Guards, working with a prominent Iranian academic, have launched another volley against President Rouhani’s “engagement” strategy by denouncing “the fantasy of an Iran-US partnership”.

Fars News, the outlet of the Guards, features a commentary by Tehran University professor Seyed Mohammad Marandi which opens with the now-standard charge that the US is behind the rise of the Islamic State, “How can the US be a serious partner in fighting a terrorist movement that Washington may have played a critical role in creating?”

The initiative is intended for an international audience with Marandi, born in the US and fluent in English, also posting the commentary on Al Jazeera English.

The professor points to the vital Iranian interest in Syria — “the US is itself complicit in funding and arming extremists” in that conflict — and adds allegations such as US cooperation with Al Qa’eda in the overthrow of Muammar Qaddafi in 2011. He concludes with the proclamation of “a policy of cooperation with violent extremists to undermine regional actors the West considers problematic” with “repercussions…felt today in countries like Pakistan, Nigeria, Australia, and China”.

Last June, after the Islamic State’s offensive swept through northern and eastern Iraq and moved towards Baghdad, the Rouhani Government proposed consideration of cooperation with the US against the jihadists, but it was overruled by the Supreme Leader. Iranian officials quickly followed with the denunciations of America as the creator of the Islamic State, even as Washington began aerial operations in Iraq.

What, then, would be the justification – under such circumstances and as Iranian allies are successfully pushing back extremists in Iraq and Syria – for the Islamic Republic to cooperate with the US in Iraq?

No matter how much some may try to tempt it, Iran will not play Faust to America’s Mephistopheles.

Marandi’s article comes a day after the head of the Basij militia, Mohammad Reza Naqdi, proclaimed that the US embassy in Iraq is the “command center” for the Islamic State.

In an interview on China’s CCTV this week, the academic took a more moderate line:

If the US President was to make a shift in US policy towards Iran, he would see that the Iranians would quickly reciprocate. If not, we will continue to have stalemate.