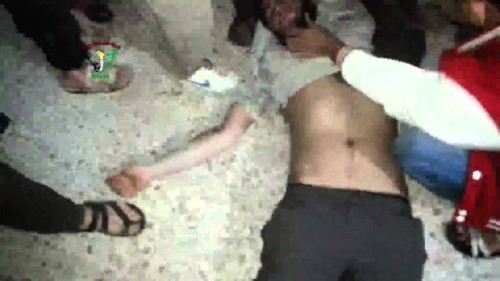 Claims are circulating that another regime chlorine attack was launched on Kafrzita in Hama Province on Monday, killing two people and wounding 45.

Kafrzita, north of Hama and near the main highway to Idlib Province, was hit by chlorine canisters — dropped within barrel bomb — on at least two occasions in April. At least three people were killed and more than 200 injured.

Now a doctor has gone on camera to testify about the most recent attack:

The doctor says two bombs with chlorine struck on Monday night about 7:30 p.m. His hospital received 45 victims with breathing difficulties and other symptoms of toxic poisoning. Two people died.